I cannot describe how eager I am to read this week’s highlight: Warlock Holmes: The Hell-hound of the Baskervilles by G.S. Denning. I absolutely adored the first book. After meeting the author and realizing how fantastic of an individual he is–and pairing that knowledge with how much fun his books are to devour–it’s a no brainer that I’ll be supporting this series for life (and anything else he writers, frankly, so apologies in advance for how many times I rave about G.S. Denning’s books on this blog over the coming years). Oh, and as if I didn’t need another reason, the next book in the series is retelling my all-time favorite Holmes case.

And then look at this beautiful cover: 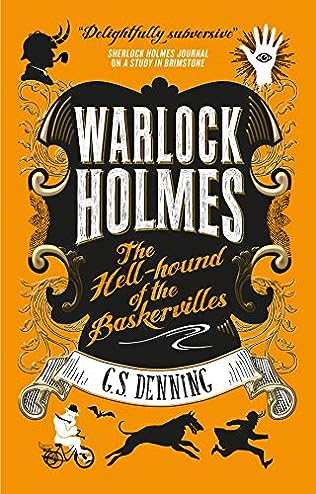 And then this teaser:

The game’s afoot once more as Holmes and Watson face off against Moriarty’s gang, the Pinkertons, flesh-eating horses, a parliament of imps, boredom, Surrey, a disappointing butler demon, a succubus, a wicked lord, an overly-Canadian lord, a tricycle-fight to the death and the dreaded Pumpcrow. Oh, and a hell hound, one assumes.

I mean, what more can you ask for here, friends? Oh, wait, I know: the book to be published and in my hands so I can devour it in a single afternoon. I’m just going to continue lying to myself and saying that May 16th really isn’t that far away.

Seriously, it isn’t. It’s just around the corner. In a blink, I’ll be sitting in the sunlight and snort-laughing at whatever trouble Warlock has gotten himself into. Hardly a wait at all. Hardly…any…wait…