** I was given an early copy of the book by the G.S. Denning, because he’s merciful and knows how eagerly I have been awaiting this book. He’s also horrible. Read on to find out why.**

Warlock Holmes: The Hell-Hound of the Baskervilles.

If you read my review of Warlock Holmes: A Study in Brimstone, the first book in this series, you know how hard I’ve fallen for this retelling. How well the characters captivated my mind, captured my heart and did their best to give me abs (thanks to laughter–in case you had any idea that Warlock and his wacky impropriety or Watson and his esteemed passion for being properly English somehow encouraged me to work out. I confess that you are sadly mistaken and I’m still ab-less–but I might have laugh lines when I get older, just from this series alone).

I had really high expectations for this book. It does contain my favorite Holmes story, after all. And as I became, dare I label it, friends with the author, I became even more invested and my expectations continued to rise.

I’m delighted to report that those expectations were not disappointed.

(I would like to offer a little caveat real quick and let you know that being friends, per say, with the mind behind the madness does not taint the outcome of this review at all–which you might find hard to believe, considering this one is glowing. Nor does getting surprised with an early copy of the book. If you don’t trust my word that is positive review is unbiased, why don’t you check out the book and let me know what you think? I promise the story will speak for itself.) 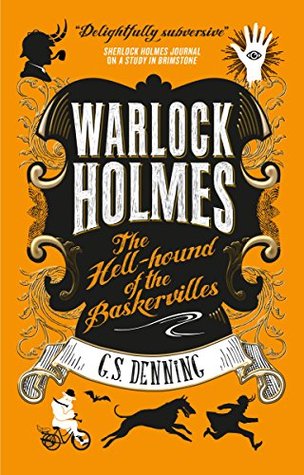 First off, I absolutely love the way the book was organized. You get a couple, shorter sections covering various cases/stories before you get to the meat and potatoes of the book (which, in this case, involved the most interesting hell-hound I’ve ever encountered and a very unfortunate family). The stories before the main event were no filler or fluff, either. All of them were a joy to read and I actually read all four cases in one sitting, they were that un-put-down-able (because that’s a word).

(I would like to take this moment to also formally deny that the lack of productivity at work last Thursday had absolutely no correlation to that reading-binge. None. At all.)

Mix in all of that humor, the clever one-liners and fantastic references, and you already have a recipe for a seriously awesome book. But then you read the tale of the Baskervilles and you get another element that you didn’t see as much of in the first part of the book, yet it also didn’t feel out of place sneaking its way into this case. Instead, it complemented this retelling and fulfilled all expectations.

The element of darkness.

Don’t get me wrong: there’s plenty of grotesque details that threads throughout the series that is utterly fantastic (and sometimes makes me question my decision to eat while reading), but the darkness that surrounded the twist in Baskervilles surprised me. And I immediately loved it, even if reading about it made my heart hurt a little. It gave the story even more depth than it already has and complicated Warlock’s complexity. I finished the book feeling absolutely content.

I know what you’re waiting for. Nicole, you mentioned that the author was horrible in the first paragraph. I’m dying to know why. Oh, I’ll tell you why.

How dare you, sir. *stares straight at Denning* That’s right, I’m talking directly to you, now. You know what you did. You know exactly what. *grumbles about book three’s unknown publication date and other spoiler-y unmentionables*

Now I realize that you, dear reader, have no idea what I’m talking about. Luckily, I have the perfect remedy for you. (Hint: it’s reading the book, which could actually be pre-ordered (before May 16th) or purchased (after the 16th) here or here or here. You’re welcome.)