I read Kangaroo Too in two days.

(Well, two and half, technically, but two sounds much more impressive and dramatic, so we’re just going with that.)

There were a lot of factors, I think, that played into why I read this book so quickly and enjoyed it as much as I did. It had all the elements I loved from the first book: the antics, the humor, the characters I’d grown so attached to, sci-fi elements and science that I still don’t fully understand (hello, the pocket) but still love to read about anyway. It also included so many new elements, from every single bloody plot twist that left me absolutely floored to learning more about certain characters’ personal lives (even if extracting that information made pulling teeth look easy), this book expanded everything I loved from Waypoint Kangaroo and took us on a new mission that I enjoyed as thoroughly as I did the last. It most certainly left me eager for the next book.

Because, seriously? How is Kangaroo meant to handle SPOILER?

Those reasons alone are enough to fall in love with this book and fly through it. Yet I have another, more personal reason, as well. 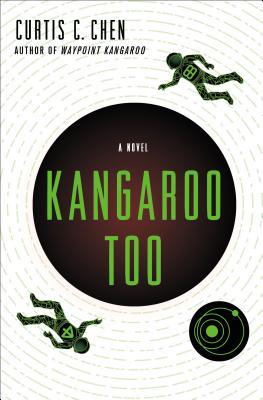 It was the only thing that, for a few days, kept me from being depressed.

It’s not even that life is that hard, right now. Life is pretty good. Yet sometimes, you just get in that frame of mind where depression slips in anyway, even though at that moment, your life is nothing to complain about and once it ensnares you, it becomes hard to shake. And that’s been my week, this week. I slept in too late. I didn’t work out or do any physical activity whatsoever. Video games just frustrated me. I’d waste hours scrolling through social media when I had so many things on my To-Do list still to complete. Hell, even writing wasn’t enough to pull me out of this sudden slump that I slipped into this week.

Yet, for some reason, reading Kangaroo Too, did.

I can’t pinpoint why or exactly how it did, but after an entire week of being down in the dumps, following Kangaroo as he ventured around the Moon helped me smile when I felt like doing nothing. Kangaroo’s cheesy jokes, Jessica’s glare, Clementine’s sass and every surprise we were offered in the last 100 pages; all of that and more made me feel something when all I continued to feel was either numb or sadness. For a few hours, I was able to escape.

When reading, can you really ask any more than that?

So thank you, Kangaroo. Until our next mission. I can’t wait to see what kind of situation you’re thrown into next.

PS: I FIGURED OUT THE PUZZLE AND I HAVE NEVER FELT SO COOL IN MY ENTIRE LIFE. *attempts to calm down, fails and decides to ride a high horse for the rest of the night*