I don’t think I’m going to do this book review justice, because…wow. Talk about a way to end a trilogy.

I’m actually at a loss from words, here. To the point that, I’m not exactly sure what to even talk about, this book was that good. Should I mention that I read it in a span of, what, three days? Two days? That the plot took twists and turns that I absolutely did not see coming, yet were the epitome of brilliance? Should I discuss how utterly and completely satisfying the last, eh, I’d say 50 pages were? Especially that second to last chapter, I mean, damn.

Except for one very particular thing that absolutely shattered my heart.

You know what I’m talking about, O’Keefe. 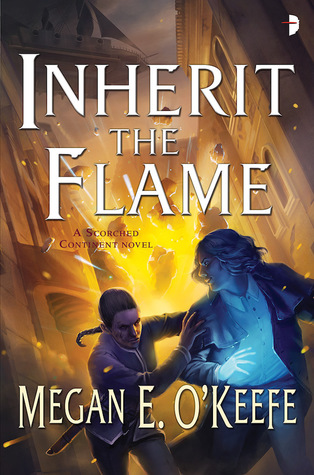 It’s the kind of end of the series that, when you’re 50 pages from the end, you have no idea how everything’s going to get wrapped up, because there is still so much going on and there is no possible way it’s going to get wrapped up and all those threads tied with so little page space left. Yet you close the book and you’re content. You have (mostly, see above accusation for clarification) those warm, content butterflies fluttering in your stomach, completely satisfied with the ending.

Oh, you have questions, still. And you want to see more of this world, continue to be a part of the lives that you’d grown to adore so fondly. Yet, for this trilogy? You’re very content how things ended, especially considering it went down not at all like you expected (but, looking back, in exactly the way it needed to, for your desired ending to be possible at all).

It’s also the type of ending that, as soon as you finish the book, you may rush to check the author’s website (and maybe also her Twitter) to find out when the next book penned by her hand is meant to be published. You’ll be dismayed to realize that there is something in the works, but it’s probably not going to be in your hands anytime soon. Because you’re selfish and you want to escape into worlds told so beautifully, with charming, complex characters and complicated conflicts, as O’Keefe has with the entire Scorched Continent series.

It’s the type of ending that leaves you in a book hangover so the review you write isn’t as polished as it should be or praise the book or it’s author as much as they deserve–and O’Keefe and this series deserves the best of the best.

But, perhaps, experiencing that hangover from her stories, getting as invested in her characters as you did and being disappointed you have to wait for more; perhaps that praise speaks volumes for itself.

So go check out the Scorched Continent series for yourself.

Trust me, you’re going to love it.

PS: To O’Keefe directly, here, if she reads this. These three words: “I promise it.” Holy shit, talk about the chills you caused from that. I mean, I’m getting them again just thinking about that scene. Whoa.