Title: Warlock Holmes: A Grave Ritual
Author: G.S. Denning
Publisher: Titan Books, May 2018
Blurb: As they blunder towards doom, Warlock Holmes and Dr. John Watson find themselves inconvenienced by a variety of eldritch beings. Christmas brings a goose that doesn’t let being cooked slow it down; they meet an electricity demon, discover why being a redhead is even tricker than one might imagine, and Holmes attempts an Irish accent. And, naturally, Moriarty is hanging around… in some form or other.

The Experience
(Book given as gift by illustrious author)

It was so good to be back in this world again.

If you’ve read my reviews of either of the first two books preceding Warlock Holmes: A Grave Ritual, you know I’m a very big fan of both this series and this author. When the author was kind enough once again to send me a copy of the latest installment (thank you, Gabe!!), I was practically dancing with excitement. Especially since I haven’t read anything particularly…funny, in a while, so I knew A Grave Ritual was going to be the read that worked out those ignored laughter muscles and just let me have a pleasurable escape from the stresses of the real world.

Oh, how it did deliver.

Reading about the cases of Warlock Holmes feels like coming home. It gives you a warm, fuzzy feeling inside that just makes your happiness levels increase exponentially, because the stories and the antics within them are just that enjoyable. I will always love the dynamic of Watson being the sleuth with the observational detective skills and Warlock being…well, not the brightest in the bunch, that’s for certain, but not without his own charms and quirks, as well (especially because it lets me use this GIF below.it just fits perfectly). But I think Watson grew a lot in this book and I really enjoyed seeing that and seeing some different sides of his personality within these cases (especially towards the end).

Some of the cases they deal with, this go around? Whoa. It makes me wish I was a little more up to date (translation: actually, ah, read all of Doyle’s original works of Sherlock Holmes) on my classic literature, because I just know there are Easter Eggs that I’m completely missing, yet that doesn’t take away from the pure awesomeness (and slight ridiculousness) of these cases. Violet’s case was my favorite, by far (also, I wouldn’t mind seeing more of that character, as well, even though I know she’s a minor character that ((most likely)) won’t come back to have any bigger role; still, a girl can dream right?). 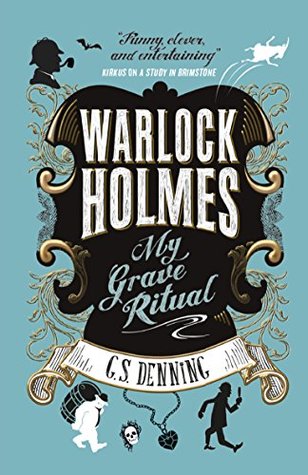 If I had to peg Denning as a master at one thing (and he isn’t, but instead, a master of many), it would be of endings. Because oh boy howdy, how can you end a book like that with the knowledge that I have another year before I get to find out what happens next?

To sum up: if you’ve read the first two books, you’re not going to be disappointed with this one. It has everything you’ve come to expect from this series: laughter, hilarious situations and mind-boggling cases, wonderful characters you love more than you should, considering they’re fictional and a wonderfully fresh twist on a classic story.

Oh, and the worst cliffhanger yet.