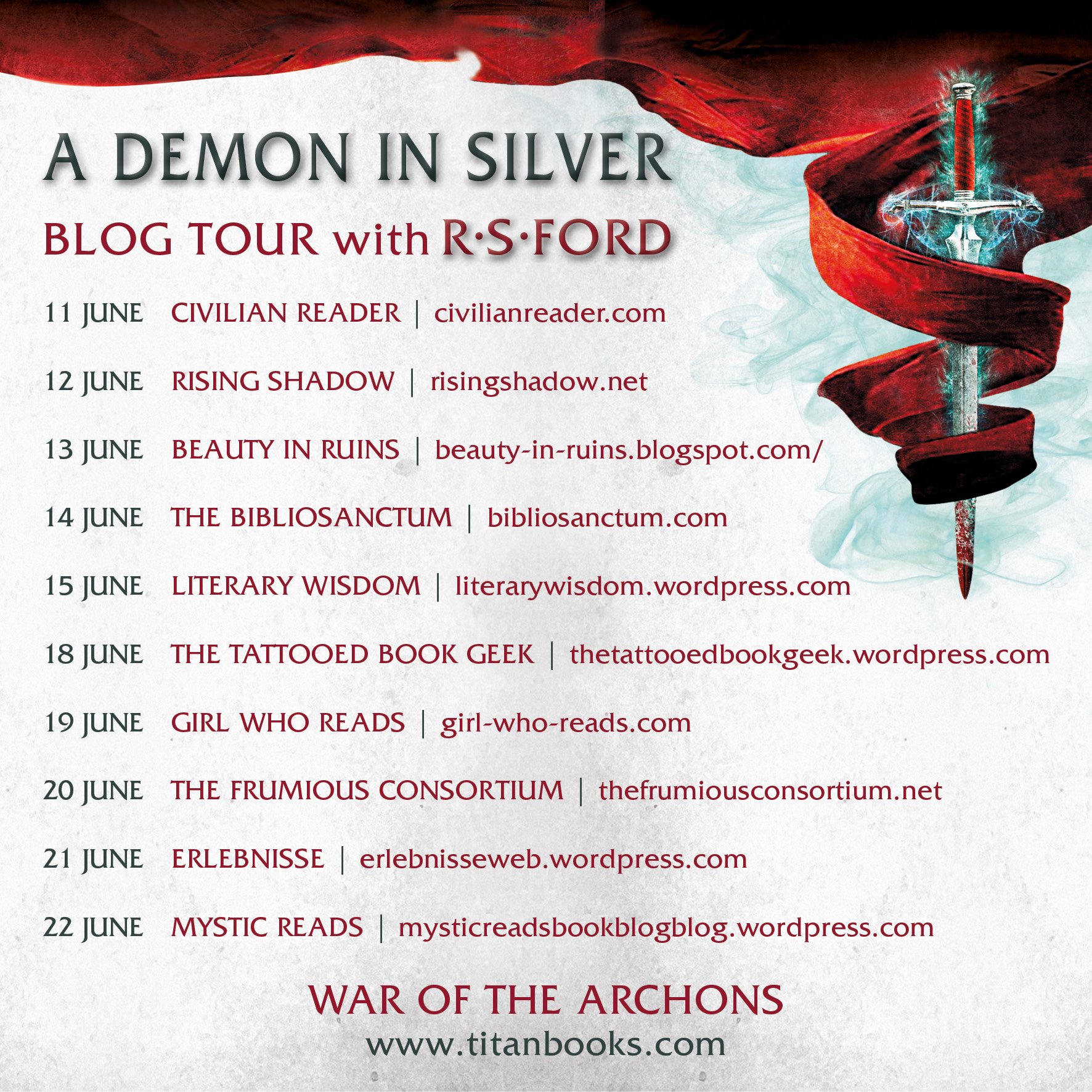 You may have noticed me promoting a pretty awesome blog tour for an even more awesome book the past few weeks: R.S. Ford’s A Demon in Silver, published this month on June 12th from Titan Books (I loved this book, as you can see from my review here). You may have also noticed that my blog was lucky enough to be selected to participate in said tour! Sincere thanks to Titan for inviting me to participate in my first ever blog tour! I’ve had a blast, so I’m hopeful participate in more in the future. I’m the second to last day on the tour, but don’t let that fool you into thinking that what’s in store isn’t completely and totally awesome. Today, Erlebnisse is hosting a guest post from the author himself, where he discusses his top five computer game characters who deserve their own novels.

And honestly, after reading this list, I kinda wish I wasn’t hosting this post, because now I just want to comment about how much YES I agree with in the list below (also, can I write the novels over the BioWare characters? Please let me write about the BioWare characters). So sit back, take a look and get prepared to have whatever current game you’re playing be thrown out the window, because you’re going to want to do replay these instead.

As well as busying myself writing the odd novel, I also write for video games (“What?” I hear you cry. “You have two dream jobs?” Calm down, gentle reader, it’s not as glamorous as it sounds, but yes, my CV does look pretty damn cool). As such I occasionally find the time to play them, and unsurprisingly my favourites tend to be the ones that lean heavily toward story and background. Most games aren’t known for their well-drawn characters, but when a decent writing team is employed, some video game stories can be as impactful as any novel.

Here are five non-playable video game characters who I think deserve their own books.

Warning: MAJOR spoilers for the some of the games included.

Jack (Mass Effect)
Abducted by Cerberus scientists and subjected to a lot of nasty experiments, Jack is a powerful biotic who clearly has a few… issues. Her background would be interesting enough to explore in a novel – running with pirates and gangsters, crashing a space station into a moon, joining a cult, being locked up on a Blue Suns prison ship – but it’s her time after meeting Shepherd and his team that I reckon would be best to explore. Jack is in desperate need of redemption and, even after helping save the universe, it’s clear this borderline psychopath has a long way to go.

Sten (Dragon Age Origins)
Ah, taciturn, humourless Sten. The hornless Qunari is a fearless warrior with an appreciation for art – the bastard lovechild of Conan the Barbarian and Brian Sewell, if you will. Sten’s story would be one of an outcast boy (a Qunari without horns would have found it difficult to be accepted in their strict, traditional society) who overcomes the prejudice of his peers to become an outspoken beresaad officer. He’s also somewhat stuck in his ways, refusing to accept women belong on the battlefield and looking down on humans in general, so include of a wisecracking female fighter to act as a foil and you’ve got a buddy story the likes of which Thedas has never seen.

Tess (The Last of Us)
Ah, poor, doomed Tess. Joel’s long-time partner and definitely the brains of the outfit, Tess comes to a sticky end in the Last of Us, sacrificing herself so Joel and Ellie can make their getaway after she’s infected with the virus. She doesn’t get much screen time during the game, but in that time she proves to be a deep and conflicted character. It’s her and not Joel who ruthlessly executes Robert when he double crosses the pair. But it’s also Tess who persuades Joel to take Ellie to safety when all he wants to do is take care of himself.

Victor (Sully) Sullivan (Uncharted)
But wait… what about Chloe Frazer? She’s much cooler than that old goat, Sully. Well Chloe gets her own game in Uncharted: The Lost Legacy, and this is my list, so ner. Besides, who wouldn’t want to read a novel about a young Sully in the 70s, looking for treasure and cracking wise? He’s a force to be reckoned with in Uncharted when he’s over the hill – imagine what he was like in his prime!

General Tullius (Skyrim)
Tullius is a ruthless general of the Imperial Legion, faithful to Emperor Titus and burdened with a seemingly impossible task (especially if you as the player choose him as an enemy). He’s also voiced brilliantly by Battlestar Gallactica’s Michael Hogan who adds gravel-soaked depth to the voice work. You meet him when he’s a cynical old warhorse, but what of Tullius’ younger days? What made him such a ruthless instrument of the Empire? What campaigns did he fight to make him so cynical? I for one want to know! So who have I missed? Who else deserves to have their story told? Answers below please!

Richard Ford originally hails from Leeds in the heartland of Yorkshire but now resides in the wild fens of Cambridgeshire.

You can find out more about what he’s up to, and download free stuff at his blog. Or follow him on Twitter. But most importantly, don’t forget to check out his books, including A Demon in Silver, which can be purchased here (Amazon | Barnes & Nobel | Goodreads) or at your local bookstore!