So, I’m a pretty huge gamer. RPGs, specifically. I’ve pretty much sold pieces of my soul to BioWare and Bethesda, particularly, and I’m totally okay with that. The games that they create makes that totally worth it. The characters who I fall in love with, the worlds that are immersive and vast and let me play every side quest I’ve ever wanted (and then some), the intense story lines that captivate me and ensnare me and actually make me feel something, emotionally.

I mean, look at my Mass Effect 3 ending rant.

I didn’t even how the brain power to write about Fallout 4.

Those games–and games like it–have moved me and completely impacted who I am as a person. Seriously. A quarter of my sleeve is dedicated to Dragon Age and the Grey Wardens who make up such a huge part of that first game within such an incredible and inspiring franchise. Franchises like Mass Effect, Dragon Age, Skyrim, Witcher, Fallout, Horizon: Zero Dawn and more I’m totally forgetting. I live for those games.

And then my friend tags me in this Kotaku article.

Friends, I am so apprehensive about this.

Dragon Age 4 is one of my most anticipated games to date. It’s one of my favorite franchises (obviously) and after a DLC like Trespasser, how can you not be excited for the game, to continue that story and find out what happens next?? Of course, with the release of the new franchise, Anthem, and some changes in the companies personnel, it hasn’t been the main focus. Granted, I’m still pretty stoked for Anthem and to check it out, even if I wish there was some more focus placed on Dragon Age 4. The timing isn’t my concern, here. 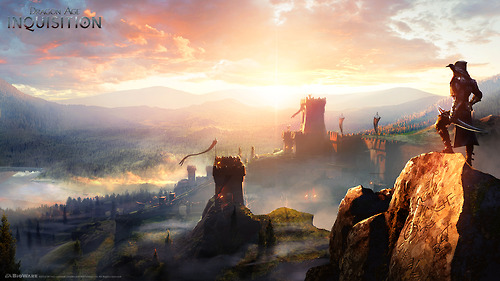 It’s how companies seem to be treading away from single player RPGs and focusing more into mutliplayer online games.

And this blend of MMO and RPG that BioWare claims they want to do with Dragon Age 4?

I’m not sure how much I trust that (prolly mostly because I don’t understand how that’s going to work).

Don’t get me wrong: I practically had a nerdgasm with the announcement of Fallout 76 and while I wait for the next batch of anticipated games to drop this year, I’ve been dipping back into ESO. I’ve even enjoyed Destiny quite a bit, even though I don’t really know what that game is trying to be. So I’m not opposed to playing multiplayer games at all. I’m not even opposed to playing multiplayer in universes that I love!

But don’t replace my franchises with them.

You see, I’ve only really started to enjoy multiplayer because of my boyfriend. After meeting him, I had someone to play with. I don’t really have any other friends that I play online with and there have been so many instances of trying to play multiplayer games online with strangers where it either hasn’t worked out or hasn’t been fun or I haven’t gotten to do an aspect of a game because I don’t have enough friends to play with. I don’t ever foresee that changing. I’ll never have a huge group of gamer friends to get stoked to go adventuring with.

Which is why I like RPGs so much. Because I can play as my character who I created and then we can go with our companions and play together; companions who play like real people, because they are characters who are in-depth, diverse and complex, with real backstories and real personalities. They are characters who might not always get along, since my character’s values and decisions might not always align with theirs (sorry, Anders) but at least they aren’t teabagging me every time I die or verbally abusing me over chat/mic because I’m a woman gamer who isn’t the best at it, but can also hold her own.

Not that I can’t handle my own, but fuck if it doesn’t getting exhausting to have a random 10 year old try and impress me by cursing like a sailor (hint: you’re not), some douchecanoe belittle me for my gender and think he’s superior (hint: you’re not) or not be able to complete an aspect of a game because I don’t know six other gamers to log in and let me do this raid.

I’ve heard this desire for multiplayer aspects in games is because that’s where the trends are. That’s where the money is. Great, good for you, make a game that fits those requirements so you can continue to run your business. Because I get it, gaming companies are a business and making notes of the trends and what is selling is important. I don’t discredit that at all.

But don’t sacrifice what’s already working to make that happen.

I get it, BioWare. Andromeda didn’t sell as well as you’d hoped (but hey, for what it’s worth, I still enjoyed the hell out of it). But you killed it with Inquisition. That’s the entire reason Trespasser exists. You did everything right with that game and set up something that, if done correctly, could be truly extraordinary. You’re capable of doing exactly that. You’ve proved that, time and time again. To me, you’re known as a company who writes the most compelling stories in the most interesting worlds with characters I care about more than some people I know in real life. Please don’t lose that for the sake of trends and sales. And especially not with this. Not with Dragon Age.

And Bethesda, I’m stoked for Fallout 76. I’m excited to see how you do a multiplayer game in that universe. I think it’s going to be awesome. But please don’t forget your roots, as you tackle new possibles and challenges. Don’t forget about those single player campaigns that are so massive, so grand, that I can play Skyrim five times over and I still not beat the main quest, because I get too distracted helping every person I come across with an arrow above their head while exploring such a beautiful and intricate world.

Multiplayer is great and can be done well. I enjoy it. I really do.

But RPGs still have a place in the gaming world. They still deserve to be pursued and created, with fervor and passion and heart. I will always be a gamer and I will support BioWare and Bethesda always, as these two companies especially have captured my heart with the games they have created and gotten me through some rough times. And I’m also always for them trying new avenues, taking chances and exploring something different, even if this post makes it seem the opposite.

All that I can ask of them is that you don’t forget us: those who loved the RPGs before and who want to continue doing so, for as long as someone is willing to make them.

PS: I also totally recognize that I haven’t done nearly enough research for this. That’s why it’s a blog post and not an article. I really just wanted to get my initial thoughts and fears out, after reading Kotaku’s article, and the best way for me to do that is through writing. Sure, there is probably information I’m missing and things I don’t realize, so these are purely my opinions, as uninformed as they may be.