This week, the book that has me SO excited because it has a cover and blurb and is looking more and more like a real book is: 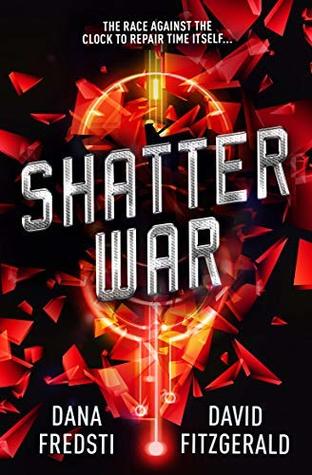 IT’S CALLED “THE EVENT,” AN UNIMAGINABLE CATACLYSM THAT SHATTERS 600 MILLION YEARS OF THE EARTH’S TIMELINE.

Our world is gone, instantly replaced by a new one made of scattered remnants of the past, present, and future, dropped alongside one another in a patchwork of “shards”. Monsters from Jurassic prehistory, ancient armies, and high-tech robots all coexist in this deadly post-apocalyptic landscape. A desperate group of survivors sets out to locate the source of the disaster. They include 21st century Californian Amber Richardson, Cam, a young Celtic warrior from Roman Britannia, Alex Brice, a policewoman from 1985, and Blake, a British soldier from World War II. With other refugees from across time, they must learn the truth behind the Event, if they are to survive.

Time Shards, the first book in this series, was one of the first (if not the first, I can’t remember) ARCs I’ve ever received, which was such a mind blowing experience for me. But not only that, but the book itself was incredible and I’m so glad Titan put it on my radar, because it was a wonderful blend of mind-blowing plot, characters I fell in love with and twists I so did not catch.

So seeing this cover and reading that blurb has me feeling all the feels.

Can it be next fall, please!?

PS: Also, if you haven’t read Time Shards yet, DO IT. I want other people to talk to about this book with!