Blurb: The suicide of a village healer sweeps Katerin, a wandering healer with a mysterious past, into the intrigues of Gods and humans. Can Katerin forge an alliance with the dangerously attractive Metkyi, avoid the curses of her destiny, and help restore a hidden leader to her rightful place?

First off, my apologies it took so long for me to get this review up! Like I said in my review of Darkmage, I was frantically reading the two semi-finalists from The Alliterates before Christmas and then, once the holiday hit, I took a much needed break from most obligations and social media. Though it’s biting me a bit now, getting back on track and catching up, I definitely needed it.

Now, I can finally write my proper review of Pledges of Honor by Joyce Reynolds-Ward. This is a book that I might have to give another go, when I’m not reading it for a contest. But, since I was not only reading it for a contest, but also in a time crunch (like I did with all the semi-finalists and unfortunately, due to circumstances beyond my control), I had to be extra critical of the semi-finalists, since there can only be one finalist. As such, I ended up stopping reading through this book just a little after the 100 mark (but still reaching past my promised bare minimum of 50 pages for every book I considered) because I already knew at that point it wasn’t going to be my finalist and I had to move on to finish reading others. 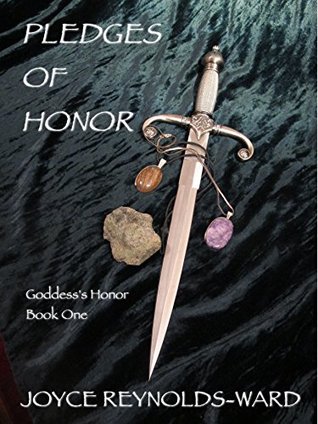 Do not let that fool you, though, friends. This is a very promising book from a solid writer. I was definitely intrigued from the start and I was very curious about where this story was going to go next, especially as I kept reading. I wasn’t the biggest fan of the beginning, simply because I wasn’t grounded enough to understand what was going on and I didn’t understand why starberry wine was brought up so much in the first couple of pages (though that’s just a minor irk). Once the paced picked up, I was really intrigued and I’m still curious how the story ended (especially as there were hints of romance possibly picking up, something I really wish I could have seen more of in the books I read, but then again, I’m just trash for romance).

But, even getting 100 pages in, it felt a little out of focus for me. I had a hard time concentrating, with so many names being mentioned and it being more heavily dialogue focused than narrative focused. We’re also told a lot of information, e.g., there are secrets in Wickmasa, instead of shown and then we’re often reminded of this information repeatedly, instead of trusting that the readers will remember the important details already shared on our own. Due to my confusion, the heavy repetition of some elements and not being able to full ground myself in the lore to understand what exactly was going on and why Katerin being assigned to work in Wickmasa in the first place was such a big deal, I unfortunately had to stop reading and cut it from the contest.

That said, I’m also kinda disappointed there aren’t more people who have read this book, according to Goodreads? It seems like it has so much promise and I think this author will definitely continue to grow and hone her skills as a writer, the more she continues to write. Though I wasn’t ensnared completely, I did enjoy it enough to keep Reynolds-Ward on my radar for any future works or releases, so I really hope more people will give her books a try.