Blurb: A seamstress who stitches magic into clothing finds herself torn between loyalty to her brother and her secret love for a nobleman in this debut fantasy inspired by the French Revolution.

In a time of revolution, everyone must take a side.

Sophie, a dressmaker and charm caster, has lifted her family out of poverty with a hard-won reputation for beautiful ball gowns and discreetly embroidered spells. A commission from the royal family could secure her future — and thrust her into a dangerous new world.

Revolution is brewing. As Sophie’s brother, Kristos, rises to prominence in the growing anti-monarchist movement, it is only a matter of time before their fortunes collide.

When the unrest erupts into violence, she and Kristos are drawn into a deadly magical plot. Sophie is torn — between her family and her future.

So, I gotta start this review off with a confession, that I’m quite embarrassed to admit.

When I first heard about this novel, I wasn’t really interested in it.

I didn’t know too much about it, honestly. I knew it was about a seamstress who somehow gets involved in a revolution, but I didn’t know much more than that (which, I should have just read the blurb, because that would have squashed any qualms right there). So, even though I heard a lot of positive reviews, I just didn’t make an effort to read it, instead trying to tame my unrelenting TBR list (with no success).

But then I saw that Melissa Caruso loved it (and we all know how I just literally adore both her and her novels) and I followed Miller on Twitter, and she was just so nice and positive and shared some really neat stuff. I wanted to support her.

So, I checked the book out from the library.

And have literally regretted not doing so sooner every day since. 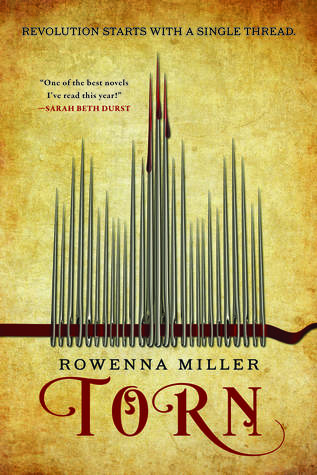 Torn was just…magical. I honestly don’t know what Miller did, but she drew me into her world from page one and I was immediately swept into this tale. I think I read the first one hundred pages in one sitting? I definitely read the last 150 in one sitting, staying up until 2am while eating two bowls of cereal and fighting off my cats from the leftover milk with my spoon (because who has time to put the bowl up when you’re busy reading about a revolution? Not this girl).

I just fell so hard for Sophie and I admired her without a shadow of a doubt. The way she built up her own business and what she was trying to do for herself, her brother and her workers was so admirable, and I couldn’t help but root for her every step of the way. As the book continues, it just gets more and more difficult for her as she is challenged and forced to make choices I wouldn’t wish on anyone to try and decide upon, and my heart just broke for her. She deserves all the happiness in the world and I just hated when anyone tried to deny her that.

I loved the characters in this book (except for one, but I don’t want to mention who specifically, because I don’t want to give any spoilers, but you know who you are, Character Who Shall Remain Nameless. And I’ll say this: you don’t deserve her and I sure as hell don’t forgive you). I thought that was one of the strongest aspects. Whether we were at the shop, amidst the rebellion or at the salon, I really enjoyed the cast of characters we followed.

The setting was really incredible, too. It made me want to go back and take AP European History again, because it was definitely giving off some of those vibes. I also thought the magic was so cool. As a person who only knew how to cross-stitch once upon a time (and no longer) and has never learned how to sew in her life, I thought having a character who’s main “power” was using magic through sewing was so unique and refreshing, yet I never felt like an idiot for not knowing how to do so myself.

So…yeah. Basically, your girl wasn’t the smartest there for almost an entire year, knowing about this book and choosing not to read it because she foolishly thought she wouldn’t love it. Well, I fell head over heels in love with it and now all I want to do is read Fray when to comes out, because I NEED to know what happens next.

Don’t make the mistake I made, friends. You need to read this refreshing tale of magical fantasy (but also, selfishly, could you please so I have someone to rant to about Character Who Shall Remain Nameless?).