Title: There Before The Chaos

The battle for the throne is over. The war for the galaxy is just beginning.

Hail Bristol, infamous galactic gunrunner and former runaway princess, never expected to inherit the throne of Indrana. But after avenging the murder of her entire family and cleansing the Empire of usurpers in a bloody civil war, the former outlaw must fulfill her duties to her people. Hail retires her gun and throws herself into the rebuilding of her Empire.

Her hard-won peace is short-lived. When Indrana’s closest ally asks Hail to intervene in an interstellar military crisis, she embarks on the highest stakes diplomatic mission the Empire has ever faced. Caught between two alien civilizations at each other’s throats, she must uncover each side’s true intentions before all of humanity becomes collateral damage in a full-blown galactic war.

There Before the Chaos begins a fresh, pulse-pounding space opera series from an exciting new voice in science fiction.

Hello, loves.
Wow, has it been a hot second since you’ve had a book review from me.
*looks at calendar*
*remembers reading slump that lasted almost six weeks*
*realizes this book was the one that suffered throughout that time frame*
*winces* 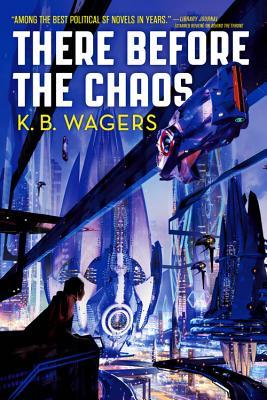 So, here’s the thing. There Before the Chaos by K.B. Wagers is a good book; an enjoyable book. I loved her writing. I loved the world and the characters (but especially Hail Bristol) and I thought the political intrigue was off the charts. I have every intention of continuing this series and the last fifty pages? Holy shit, did it actually get my heart pumping and make me wish the sequel was already published, because damn. I did enjoy this book, I’m really glad I discovered this author and I cannot wait to read more of her work.
Actually, before we move on, I just wanna say: my favorite part? I lied, I have two: Hail fucking Bristol and the band of characters who support her. I love incredible women who I can read about, be impressed by, empathize with, admire and wish I could be like. I experienced ALL of those emotions reading about Hail and it’s…been awhile since I appreciated a woman so much for her strength, her no-bullshit attitude, the way she handles herself, yet I also got to see more of her than just that hard ass side. She was complex, multidimensional and honestly, I would be honored to be amongst her friends or her crew. I love her and will probably start naming my video game characters after her–and I haven’t switched names since discovering Karris White Oak in Brent Weeks’ Lightbringer series.
I also loved how I got a Mass Effect vibe, with Hail being Shepard and the rest of her guards and friends feeling like I was back on the Normandy. That was a great feeling and made me wish I could replay those games again (*grumbles in BioWare’s direction about a much-needed remaster*). Though I did have a bit of a hard time keeping up with which character was which character (there were a lot of them), I also appreciated that, actually, a little bit? Because it gave it a more realistic feel? Hail is empress, after all. Of course she’s going to meet a lot of fucking people.


But, I also tried to read this book during a reading slump, initiated after reading a sci-fi book that was a bit too dense for this human (on top of just being busy and a hectic life and whatnot). So it took me over a month to read a book that should have (or usually would have) taken me a few days to read, a week, at max. It was hard for me to read because I just didn’t want to read period. And I don’t want that personal problem, let’s call it, to reflect poorly on this book or the quality I truly believe it has. But, like everything else, what’s happening in your life can influence other areas, as well, so I felt that this book’s pace dragged quite a bit in the first half before finally starting to pick up in the second, so it was hard to be motivated to read it, even though I was curious? I doubt someone else in a better headspace would feel the same way.
However, I do think that I made a mistake of reading this book before reading the previous trilogy Wagers wrote, featuring the same characters. What happened before was well explained and I heard you could read it without doing so, but I felt that I…lost a lot of the emotional connections, pangs and impacts I should have felt because I wasn’t as familiar with these characters and their backstory, by jumping into this novel first. And, from what I learned in this novel, I am really curious what happened in the other books. Personally, if you’re interested, I’d recommend reading the previous trilogy, first. I just think the book will become more powerful, if you read it in that order, instead.

All that said, I enjoyed this book (as much as one can when they and reading don’t get along well) and I think I would have enjoyed it a LOT more if I a) had read the previous trilogy first and b) was in a better reading headspace as I tried to read it. I have every intention of reading the rest of Wagers’ works, because she is obviously a very talented writer. Frankly, I’m excited to read her works when I’m not dealing with a slump, so I can truly appreciate the full effect of her works!
Basically, this is a long, ramble-ly post to say that, if you’re interested in these books, I think you should check them out!! I haven’t heard too much discussion about them and I think they deserve a little more attention, personally.
Read on!