Blurb: A nobleman’s daughter with magic in her blood. An empire built on the dreams of enslaved gods. Empire of Sand is Tasha Suri’s captivating, Mughal India-inspired debut fantasy.
The Amrithi are outcasts; nomads descended of desert spirits, they are coveted and persecuted throughout the Empire for the power in their blood. Mehr is the illegitimate daughter of an imperial governor and an exiled Amrithi mother she can barely remember, but whose face and magic she has inherited.
When Mehr’s power comes to the attention of the Emperor’s most feared mystics, she must use every ounce of will, subtlety, and power she possesses to resist their cruel agenda.
Should she fail, the gods themselves may awaken seeking vengeance…
Empire of Sand is a lush, dazzling fantasy novel perfect for readers of City of Brass and The Wrath & the Dawn.

**ARC provided by Orbit Books in exchange for an honest review**

So, did anyone else read over 300 pages of this novel in one sitting, or was that just me?

Because wow.
Tasha Suri knows how to destroy you, in all the best ways.
I’ll admit, I struggled for a moment to get into this book (simply because I was on a romance kick and this was a different genre!) but it wasn’t long before Mehr completely captivated me and I found myself lost within her story within this beautiful and harsh world. Like, not only did I read 300 pages in a single sitting, but I also snuck back outside with my puppy because she needed a “bathroom break” while my boyfriend was home to keep reading, because I *had* to know what was going to happen next.
(He found me twenty minutes later and finally, I relented and decided to spend time with my real life loved ones, instead of finishing this book in one day.)
Yeah, saying I loved this book is an understatement. 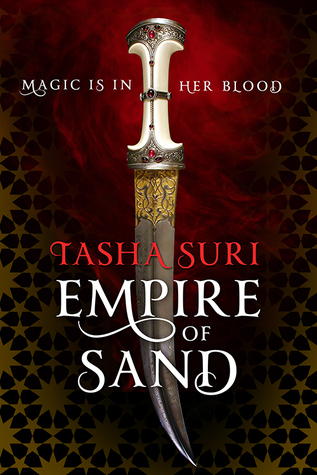 I admired Mehr so utterly. Her strength was inspiring and the way she tried to balance who she was and what was expected of her both broke my heart and also gave me courage. I thought the magic was incredible (the Daeva, in particular, were really fascinating to me) and I really enjoyed the way performing rites was incorporated and how rites could capture so many different feelings, from calm and feeling whole to destruction to belonging to pain to hope.
This book pulled at so many emotions and heartstrings, which I wasn’t expecting? I mean, I expected this to be a quality book (I’ve heard so many positive things!), but I wasn’t expecting to fall completely and utterly in love with this, becoming so invested. The writing was gorgeous, the characters I quickly became attached to (whether to love or to completely hate) and I loved how romance was handled in this novel and I could not get enough of it.
Unrelated note: I now have a major crush on Amun, so that’s totally a thing.
So, yes, I loved this book and read it in two days. I cannot wait for the sequel. I’m super curious to see what happens in the next story. But, if you haven’t read this yet, I highly recommend it. It’s a well-written, beautifully crafted, character-driven, Mughal India-inspired fantasy that deserved to be on every fantasy lover’s bookshelf.
Read on!