Blurb: Young Fitz is the bastard son of the noble Prince Chivalry, raised in the shadow of the royal court by his father’s gruff stableman. He is treated like an outcast by all the royalty except the devious King Shrewd, who has him secretly tutored in the arts of the assassin. For in Fitz’s blood runs the magic Skill–and the darker knowledge of a child raised with the stable hounds and rejected by his family. As barbarous raiders ravage the coasts, Fitz is growing to manhood. Soon he will face his first dangerous, soul-shattering mission. And though some regard him as a threat to the throne, he may just be the key to the survival of the kingdom

I finally did it.

I’ve been collecting books by Robin Hobb for years. Anytime I could find them at a Half Price Books sale, I’d pick them up, because I’ve heard nothing but amazing things about her work (and, let it be known that my excitement skyrocketed when I realized that Robin Hobb was a WOMAN and not the man I just foolishly assumed in middle school). I was confident I was going to fall in love with this author like everyone else had, so I needed to be prepared.

We all know where this one is going, right?

Literal years went by before I ever touched Assassin’s Apprentice. Do I berate myself for waiting so long? Of course I do. Was it everything I ever wanted it to be and as good as everyone else claimed? But of course it was. Will I wait so long to continue reading her works and repeat the mistakes of my youth? Oh, I bloody hope not. 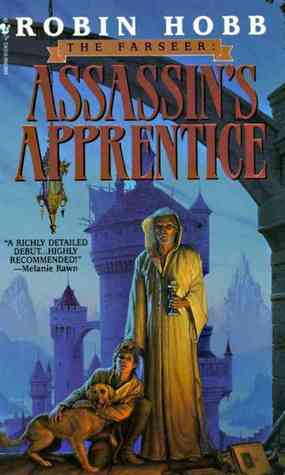 Assassin’s Apprentice, despite having never read it before, felt like coming home. I’ve been reading a lot of newly published fantasy recently and it’s been fantastic, to discover fresh worlds and plots. And it’s not to say that this story in and of itself isn’t unique, too. It is! But it did feel more like the classic fantasy I read growing up. Hell, even the book itself smelt old and glorious (and I seriously had a pause a few times just in close my eyes and inhale). It felt like I was a child again, not a care in the world, not a stress to be had, curling up in my bed with extra blankets and the classical radio station playing, my dog asleep on my feet as I slipped into another world. It’s a feeling I don’t always get when I’m reading and it’s a feeling I always miss, but I cling to it once I find it again.

I found it reading this.

It just made this story that much more enjoyable for me. And, despite this feeling–this nostalgia and familiarity I felt for book I’ve never even read, I was still able to be surprised, to be wowed, to be shocked. My heart broke exactly twice and both times, I thought I couldn’t handle it. The characters were incredible, the world believable and I just wanted to grab onto Fitz and hold him for dear life and tell him it’s all going to be okay.

Even if it prolly isn’t.

I’m glad I’ve finally read Hobb. My expectations were of the highest regard and they weren’t disappointed in the slightest, not by a long-shot. I’m even more ecstatic to continue reading her work, falling in love even harder and breaking even more.