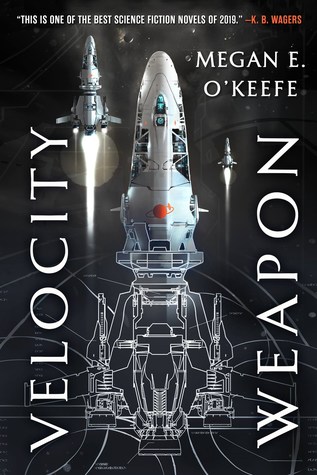 Sanda and Biran Greeve were siblings destined for greatness. A high-flying sergeant, Sanda has the skills to take down any enemy combatant. Biran is a savvy politician who aims to use his new political position to prevent conflict from escalating to total destruction.

However, on a routine maneuver, Sanda loses consciousness when her gunship is blown out of the sky. Instead of finding herself in friendly hands, she awakens 230 years later on a deserted enemy warship controlled by an AI who calls himself Bero. The war is lost. The star system is dead. Ada Prime and its rival Icarion have wiped each other from the universe.

Now, separated by time and space, Sanda and Biran must fight to put things right.

Okay, this is fucking gold.

I don’t think I can write a review that will do this book justice–that will properly explain how much I loved this book, how much it wowed me and completely blew my mind, confirming an opinion that O’Keefe is a mastermind of the craft by telling amazing, thought-provoking, important stories–but I’ll attempt.

Velocity Weapon is a powerhouse book that is completely on another level from your traditional sci-fi adventure. Not only it is a breath of fresh air, in terms of its inclusiveness and it’s treatment of creating 3D, multidimensional female characters (including our lead), but it also packs a punch that will leave you as breathless as getting spaced off a ship will–and blow your mind in half that time. It’s an intricately woven tale of adventure and intrigue that weaves a narrative of trust and facts and situations so dire, you just don’t comprehend how these characters are going to survive it.

Not only does everything turn completely upside down and your complete sense of trust and understanding fly out the window, but you are also just completely blown away that O’Keefe just did that? How she so expertly–and almost unknowingly, on your part–wraps what you believe, through gorgeous prose and excellent narrative storytelling, with multiple POV, in multiple points in time, only to pull the rug out from under you and then leave you on edge for another 250 pages?

That wasn’t even the biggest reveal.

I went from reading a chapter or two a day (thanks to my depression, NOT to the quality of this book) to reading over 100+ pages and finishing the second half of the book in two days, because I just couldn’t put it down. After I closed the book, I immediately checked my bank account to see if I could justify buying the sequel, CHAOS VECTOR, immediately (I can’t, but hopefully soon?). That’s how good this book is.

I already fell in love with O’Keefe’s work from her Scorched Continent series, but this book just takes everything up a notch. I absolutely loved Sanda and Tomas. Biran broke my heart, but I loved him, too. And Bero…well, you’ll just have to read for yourself to figure out that one. The politics were fantastic, the way the multi-POVs spanned across different timelines were delivered was impeccable. The worldbuilding was fantastic and the inclusiveness just reminded me I wished all books were written with that kind of care.

So, obviously, this book is a major five-gem read for me. If you are a fan of sci-fi, you gotta read this book. If you aren’t: well, this book might just make you become one.