Well, that was interesting.
Do you remember that time when I referenced how I don’t usually read romance novels for the intricate plot, because they all follow the same general narrative structure/arc? I didn’t mean that as a bad thing at all (obviously, as I keep reading them and really enjoying them). It’s just that if I’m looking for a story that is going to keep me at the edge of my seat, I’m not going to be looking at romance.
A Lady Awakened by Cecilia Grant surprised me. 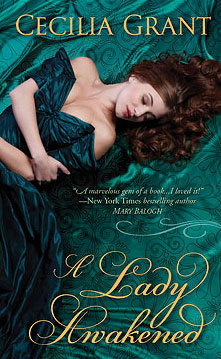 Granted, I wasn’t at the edge of my seat, like I often end up when I’m reading fantasy. But while I was reading, the plot that I was expecting (e.g., lonely, unappreciated woman discovers ((usually wanton)) handsome rogue, they flirt, fall in love, something makes one of them believe they can’t be together ((often resulting from the inability to communicate between the two lovers, which is a entire blog post by itself)), and they end up together) wasn’t the plot that I was reading, despite having a lot of similar elements. You see, another aspect I associate romance novels with–the types I usually read, anyway–is where the climax of the story is. Hint: it’s the scene where the characters themselves are climaxing (if you catch my drift). It’s almost as if that act is the reward, for both the readers and the characters, after all of the shy glances, flirtatious advances and hesitant seduction. Personally, I enjoy the act of seduction more (when I get chills, it’s never during the climaxing scene. It’s always the scenes where hands brush accidentally or a kiss is delicately placed on the back of the neck or the first kiss). But enough of my personal tastes…ehm…yeah, moving on.
What was interesting about A Lady Awakened was that the entire process was reversed. Martha Russell is recently widowed but desperately wants to stay in her home, yet she was left motherless, as well as suddenly unmarried. In order to keep her home, she schemes a lie that she doesn’t know whether or not she is pregnant, buying her a month’s time. But she doesn’t spend that month idle. No, instead, she hires–literally–exiled playboy Theophilus Mirkwood to get busy with, which he agrees to and they do. Every day. Sometimes, multiple times a day. So the moment that is usually the climax of the book because the norm within the narrative arc, the rising action, if you will. Naturally, the new climax becomes the moment when Martha actually allows herself to enjoy her time with Theo instead of stubbornly not enjoying it–not letting him kiss her, touch her, etc.
And I must say, that change was ridiculously refreshing.
Of course, I’ll still be reading romances that follow the exact plot structure to a T and I’ll still definitely enjoy them. Yet reading it almost out of order, in a sense, to the traditional novel was really interesting. Particularly Martha’s POV, especially in regards to why she refused–for weeks–not to enjoy her intimacy with Theo, instead viewing it as a business transaction. To her, if she enjoyed it, the act somehow worsened, yet if she stayed resolute and didn’t fall for Theo or give into him, then what she was doing to help her town and her own life was at least forgivable. That perspective was really interesting and I didn’t get angry at Martha, like I usually do with romance heroines. I understood and I supported her.
The main aspect–perhaps the only aspect–I didn’t enjoy was the ending. I stopped reading with, what I thought, was about 20-30 pages left before work. During my dinner break, I planned to finish it. When I did, I discovered that I had been deceived by the length. My copy (i.e., the library’s) actually had a sneak preview of another one of Grant’s novels, so I actually only had a couple pages left when I thought I had at least two more chapters. After I finished it, I sat back and said, “Oh.” I won’t give away any spoilers. I just didn’t expect it to end so quickly. It felt rushed and left me with some questions that I really felt should have been answered. Plus, it also felt too easy, which I really shouldn’t be complaining about, as I always hate the chapters when the lovers quarrel. But there was a conversation between Martha and Theo that was missing that I really wanted to be there. You’ll know what I mean when you read it. So I wished I could have gotten a little bit more out of the ending; ten pages, that’s it. However, I was okay with the fact that there wasn’t an epilogue that was three pages and showed the couple together with a horde of kids running around in the sun five years later. (It’s not that these ending chapters are bad. I could just do without them.)
For me, A Lady Awakened provided a refreshing reordering of the traditional romance structure, with some laughs and the occasional caught breath to keep it interesting and entertaining for me as a reader. I’m sure I’ll find myself submersed in another Cecelia Grant romance before long and I look forward to it!
Read on!
PS: The “eight minutes” line at the end was awesome, btw. Oh so awesome.