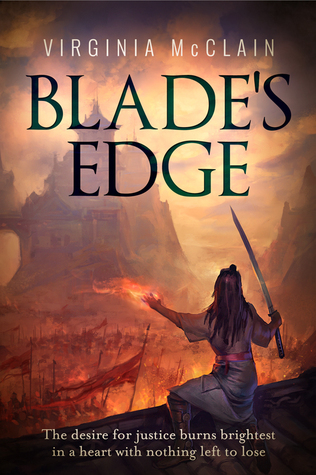 Title: Blade’s Edge
Author: Virginia McClain
Published: 2015
Amount Read: 100%
Rating: 4 out of 10
Blurb: Mishi and Taka live each day of their lives with the shadow of death lurking behind them. The struggle to hide the elemental powers that mark the two girls as Kisōshi separates them from the other orphans, yet forges a deep bond between them.

When Mishi is dragged from the orphanage at the age of eight, the girls are unsure if or when they will find each other again. While their powers grow with each season-cycle, the girls must come to terms with their true selves–Mishi as a warrior, Taka as a healer–as they forge separate paths which lead to the same horrifying discovery.

The Rōjū council’s dark secret is one that it has spent centuries killing to keep, and Mishi and Taka know too much. The two young women have overcome desperate odds in a society where their very existence is a crime, but now that they know the Rōjū’s secret they find themselves fighting for much more than their own survival.

Overall, I found Blade’s Edge to be filled to the brim with promise, but by the end, still left me wanting.

It was very refreshing to read a story that wasn’t inspired by your traditional Western, white cultures and societies! I definitely want to read more stories like that and one of my goals is to do just that this year. (I also love how the cover actually reflected that influence, instead of hiding it away.)

I thought the writing style itself was pretty solid. It was easy to read and at times, quite enjoyable! It was the issues down below that made me not able to fall in love with it completely, but McClain definitely has the chops to write a clean, error-free story!

I thought this story and it’s plot had so much promise. Mishi and Taka’s stories, the way they came together and then were separated, how their lives seemed to oddly mirror one another, constantly weaving parallel or even together at times, even if they didn’t realize it. But, again, I think the execution wasn’t quite there yet and this story has a lot of room to grow.

I really liked the first chapter. I thought the writing was good, I enjoyed reading about a different culture from my own and I was very intrigued to see what would happen next with these two girls. But then we’re suddenly rushing through everything at a very fast pace, with big time jumps happening between chapters. It felt way too rushed, not allowing me to truly process what Mishi and Taka were dealing with or feeling, which made it hard to connect with them, as characters. It also made the entire set-up of them never letting the other one go feel false, when we never see them really think of the other person again, after being separated, which has lasted effects in regards of my ability to get invested as this story continues and the plot develops.

There isn’t much natural transition within this novel, but instead, a lot of time jumps between chapters and within chapters, which causes some confusion on what exactly happens in-between and causes a lot of pivotal scenes and information to be missing, and thus explanation and understanding lacking.

Like I mentioned above, I think this story has a lot of promise. But the combination of the time jumps that caused confusion and increased misunderstanding and lacked cohesion, plus the way the pace was so rushed, not letting us inside our characters heads and giving them time to develop; really hindered this story and the potential it had, for me personally.

In sum, I thought Blade’s Edge had a lot of promise and is built on a very solid foundation, but ultimately, it didn’t work for me. I rate this book 2.5 gems out of five, rounded up to 3 stars on Goodreads and a 4 out of 10 for the purpose of SPFBO.