When I was in 7th grade, I came up with a plot for a love story. It was full of clichés and was pretty cheesy, and of course eventually developed into something that incorporated fantasy elements within it, looking at the supernatural, and, apparently something I have to do as a writer (based on my completed works), a heartbreaking ending (even with the clichés). Despite making outlines and mapping out the story in my head, I never wrote that story down.
My freshmen year of college, however, I did write the story of their child.
Once I knew the characters in my head would have a child, I wondered what his life would be like. I wondered what challenges he would have to face because of his parents choices and who they were. Then, suddenly, I found myself with notebooks filled with notes and details and ideas about this boy whose story of being born was never written, but his life was unfolding before me at a very rapid rate. It was then that I realized that I had to record his story. It was the story I was meant to tell.
His name is Darryn Syn. His story is told within the The Destiny of the Dragon trilogy. At today, after spending almost five hours writing the last few chapters, I finished it. 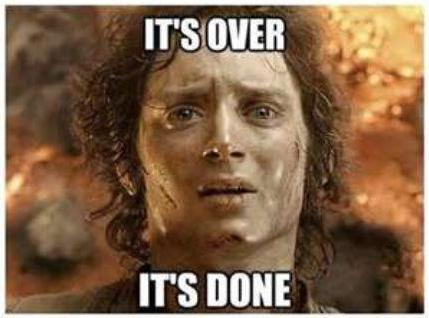 (This post wouldn’t be complete without a LOTR reference to capitalize on this monumental moment).
I remember back during freshmen year when I finished the first book of the trilogy. I spent almost two months writing and rewriting the first chapter alone, roughly seven months prior. My friend who was reading it at the time and hounding me every day to write was driven crazy that I couldn’t get past this first chapter, especially because I knew what needed to happen next. I knew the bare bones of books one and books three, the beginning and the ending. The middle I was hoping would come along when it needed to (thankfully, it did). Yet I just couldn’t get past that opening chapter. But when I finally finished the book, almost seven months later, I remember it vividly: I was sitting in my dorm room (it was my sophomore year at this point). I had gone downstairs to hang out with some friends playing ping pong and writing while they did so. Yet as the writing got more intense and my emotions were getting the better of me, I needed to be alone.
So I left and went back to my room, curled up in my bed, opened my laptop and wrote for a couple more hours. And I finished it. As I wrote the lines, “This story will continue in Book Two,” my hands were shaking. I was drenched in sweat. And I started crying and laughing at the same time. I was in awe with what I had just accomplished: I’d written a book. I’d finished an entire book. I felt on top of the world.
And now, around three years later, not ten minutes ago, I wrote the words, “Thus concludes The Destiny of the Dragon trilogy.” And my reaction is much different. I’m not shaking, I’m not crying, I’m not sweaty (okay, not as bad as the first time). My fingers hurt and my neck is sore. My heart is both heavy and light at the same time. But mostly, I just feel numb. I finished a trilogy. Darryn’s story? It’s completed. It’s done. I saw it through until the end. The journey itself was incredible (and one that I will save for another post very soon, as sleep is something I desperately need) and the process shattering (in a best sense).
These are characters that I’ve been working with for over six years, whether dreaming them up (literally), drafting and outlining their lives, or actually recording their stories. And their story is completed. The loose ends are tied up, the various threads are brought together, the hints dropped in book one are capitalized upon and the seeds of further mystery to be explored in future works have been planted.  Of course, I’m not leaving the world of Sanctimonia yet. Revision will be the main project of the first half of 2016 (as well as securing an agent so this story can eventually be told to the world), while the second half will yield a different project entirely: adapting my full-length science fiction screenplay into a novel of its own. But I think that, currently, I’m numb because I feel too many things at once to accurately describe any of them. I’m also numb because I know I’m not done yet. I don’t have to say goodbye to these characters that have my heart and soul–not yet.
I do very much dread the day when I do.
Cheers.

Previous Post: « Thankful for Failure: A Change in Life Paths
Next Post: Why I Really Want an Agent »