I usually devour romance books. Averaging around 400ish pages, they are easy to read in one sitting, with their soft prose and predictable, general plotlines: soon-to-be-couple meets, they either immediately like each other or immediately hate one another, then they fall in love, they get busy, they get angry after not being honest with one another, they almost split and then they get married. Personally, I don’t mind the repetitiveness of the genre (also, I recognize that this doesn’t apply to every romance book published. It’s simply a trend I’ve noticed in the books I’ve read). Each book, while following this most general format, has different characters, different locations and are usually still interesting enough for me to dive into, despite the predictability. I don’t read romance books to be wowed by plots or guessing at every turn (though sometimes I’m pleasantly surprised). I read them to be wooed, to fall in love for an evening, because I’m a tid bit lonely and a solid steamy romance helps keep the loneliness at bay.
How a Lady Weds a Rogue by Katharine Ashe was a very solid book. It is the third in the Falcon’s Club series, which, of course, I didn’t realize until I already started reading it. Having not read the previous two books, there were moments when I was a bit confused and could obviously tell when scenes were meant to be rewarding for series-readers. Yet I wasn’t hindered by those moments and could still understand and enjoy the book rightly enough. 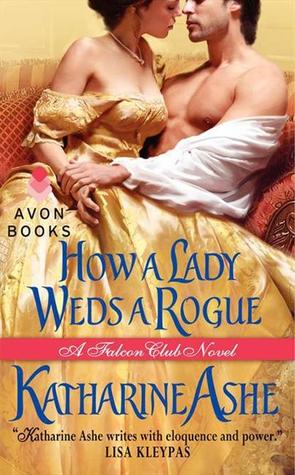 Unlike the previous romance book I reviewed, this one had a little more of the steam and wooing that I was looking for. Wyn was certainly an interesting hero and I absolutely loved the utmost gentleman angle that the book looked through, particularly listing out the “rules” a gentleman should follow. Especially juxtaposed with “minx” Diantha, who constantly challenged Wyn’s gentlemanly nature, I thought it was a fun ride. I could tell I was getting into the book when I had a very distinct urge to stop reading it once I reached the “they get angry and have to split” stage, this time inspired by lies on both sides, a man’s fear and a gentleman’s duty.
Even being 95% sure that they are going to get back together at the end (because that’s what romance books typically do, right?), I still didn’t want to read through the scenes where Wyn lied to Diantha about his feelings for her, in order to protect her. And or when Diantha believed Wyn would only marry her because of duty, not of love. As a reader–particularly as a reader longing to be in love–it was totally frustrating and definitely made me want to shake both characters and tell them that, instead of lying to one another and coming up with the explanations behind each other’s motives, why not bloody talk to one another? A constant frustration, yet there has to be some conflict, right?
Overall, I enjoyed it. I thought Diantha was an awesome protagonist, with her fiery spirit and her inner fears that no man could possibly love her. I connected with her on multiple levels, which is what I want to do with the heroine. As far as the hero went, he didn’t sweep me off my feet, but he did give me chills on multiple occasions, so in my book, a win. The first book I’ve read from Ashe, but I think I’ll look into some others, in time. A few more romance books on the shelf from the library, plus the start of a fantasy series and a book of fairy tales that I need to get reading, first.
Read on!