Since no one threw stones and called me names after I announced that I wanted to do a tour of my personal “library,” I’m going to do the first post today! Thanks for letting share something I am so proud of with all of you, it really means a lot. 🙂

Again, as a reminder: I recognize that the ability to buy myself books, receive books as gifts and receive ARCs is a privilege I’m very lucky to have and not everyone does. I also believe you don’t need to own books or have a huge collection to be considered a “real” book blogger, as book bloggers take many shapes and forms! This is just something that I enjoy personally, so please, let’s keep the comments positive and supportive! 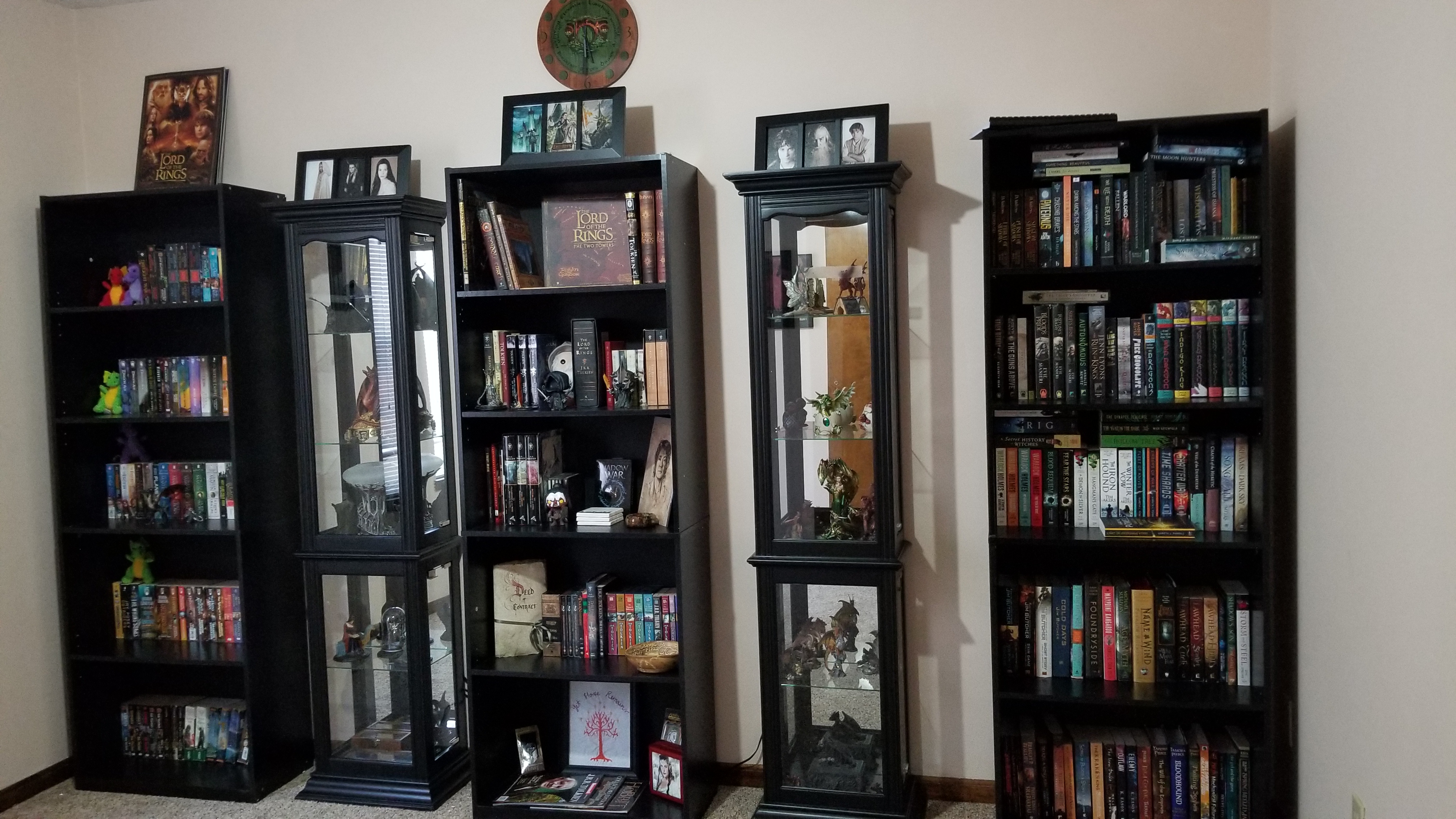 This is the main aspect of it, though there is another bookshelf and my writing desk on the other side. And it’s that other bookshelf that I’m going to be highlighting today!

A little bit on my bookish organization choices. I actually decided to do almost a three-tier system, in a way, that I mostly follow, though after I initially set it up, most books I’ve received since June of last year have been placed near where I prolly should go, but I’ve been too lazy to properly arrange them all. But I arrange my books like this:

So, I have a bookshelf for my mass market paperbacks and then two bookshelves that are a mix of hardbacks and paperbacks. I also have an entire bookshelf dedicated to Tolkien, but we’ll get to that one later!

I decided to do it by publisher, because…honestly? I love Orbit so much, I wanted to have an entire bookshelf dedicated to books only published by Orbit, so it made sense to do the same with some of the others, too! I threw in author’s last name so I’d have a better chance of finding a book I was looking for quickly later. 😛

Without further ado, let’s take a look at the bookshelf that’s not on my main wall, but might be one of my top favorite: my Orbit Bookshelf! 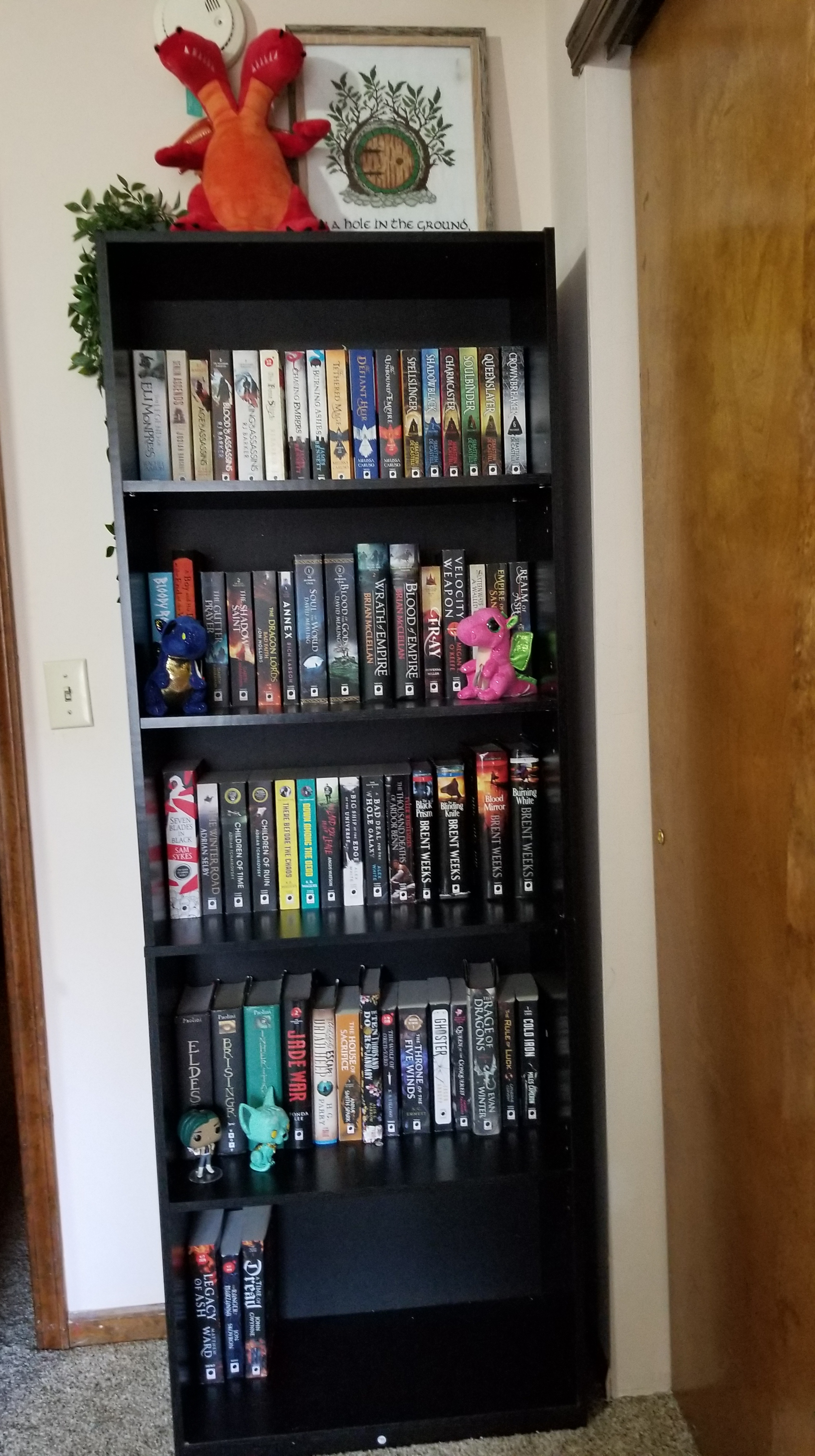 I was really happy when I was able to fit a bookshelf along this wall right on the inside of my library. On the top shelf is a two-headed dragon plushie I couldn’t resist (in case you didn’t know, I’m sorta obsessed with dragons), a fake plant since I both can’t keep a real one alive and my cats most definitely eat them and then an AMAZING cross-stitch my friend made me for my birthday of Bilbo Baggins’ home and the iconic opening liner from The Hobbit.

I also have some additional dragon plushies on the shelves that I’ve collected over the years, plus Alana and Lying Cat from Saga, the comic series that has wrecked me and scared me to the point of being unable to start of the fourth volume, out of pure fear, despite knowing I’m going to absolutely love it.

So, I figured we could take a look a close-up of each shelf and I could share some of my favorites, some reading stats and any other fun stories I can think of. I hope you enjoy it! 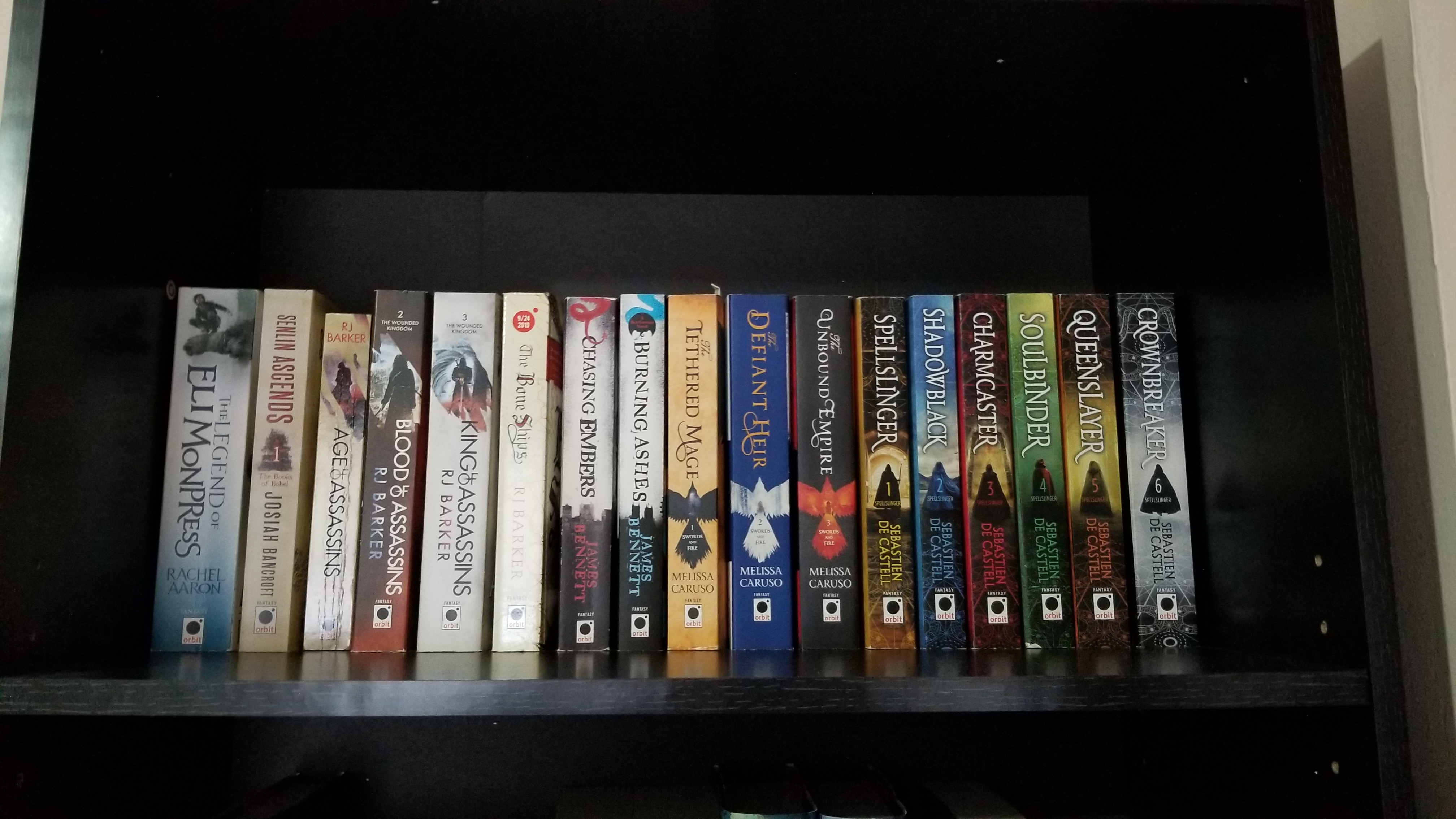 This shelf is 90% Sebastian de Castell’s Spellbringer series, of which I am just completely smitten and fell head over heels for, which was a really pleasant surprise, because I wasn’t expecting to love it as much as I did! It also contains everything R.J. Barker has written so far–a favorite author who I discovered thanks to winning a copy of Age of Assassins from a Twitter contest after his cat destroyed a copy of the book (and damn if I don’t complete and utterly adore his work and am so grateful to his cat for helping us get connected!! I’m so excited to finally read The Bone Ships this year). It also has Melissa Caruso’s Swords and Fire trilogy, which I absolutely love and cannot wait to finally finish this year, too!! 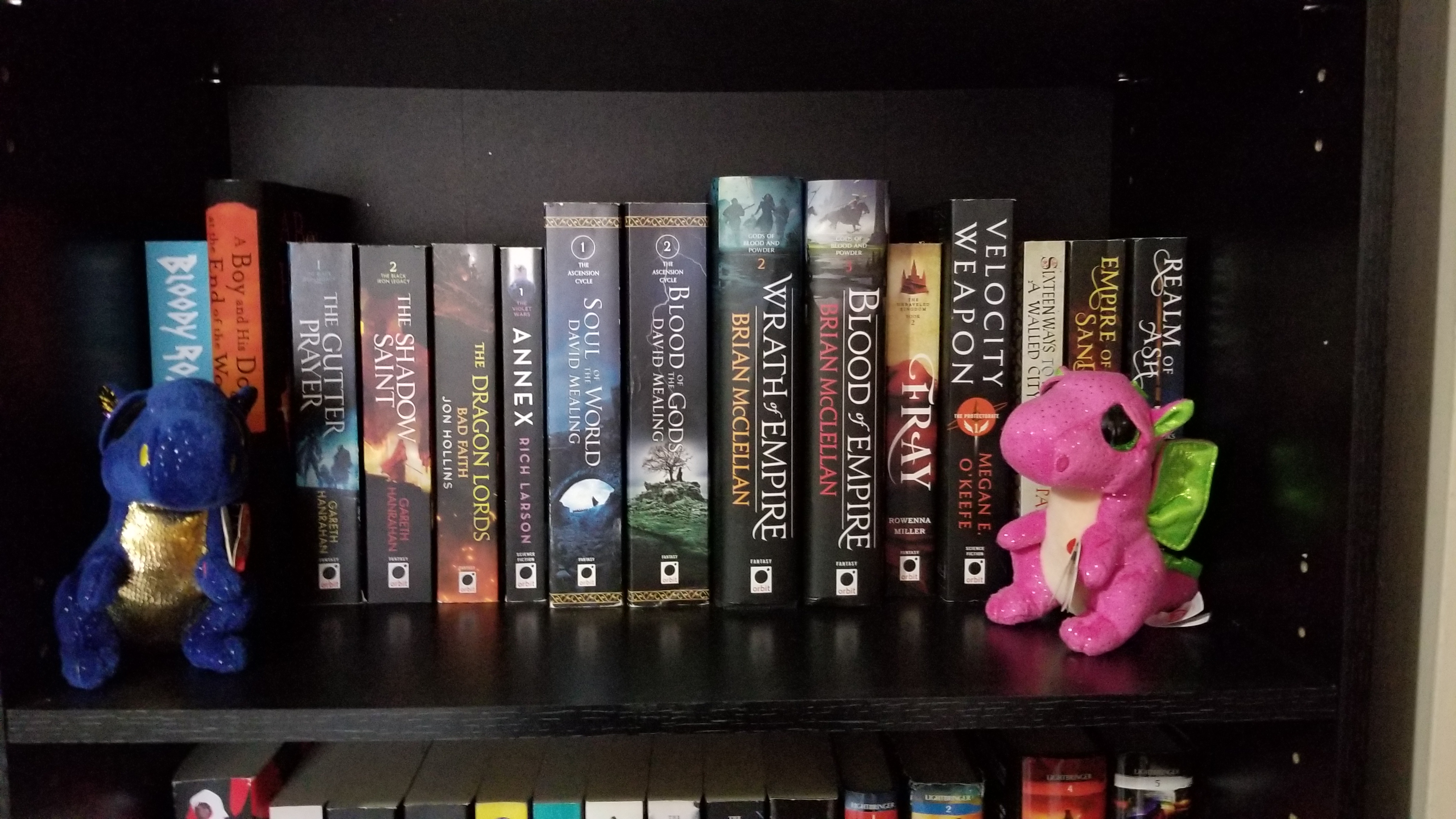 This book contains some of my favorite books of EVER, including: Bloody Rose by Nicholas Eames, which destroyed and completed me in every possible way (plus, usually Kings of the Wyld, but I’m loaning that bad boy out to as many people who will take it, even though I miss it); a few of Brian McClellan’s books, so good that I binged five in a row (from the library, though I hope to own them, one day); Gareth Ryder-Hanrahan’s The Gutter Prayer and The Shadow Saint, one of my most anticipated reads this year; Velocity Weapon by Megan O’Keefe, which I CANNOT wait to read this year; and Tashi Suri’s Empire of Sand, which COMPLETELY blew me away. Realm of Ash is going to destroy me, I already know it. I can’t wait. 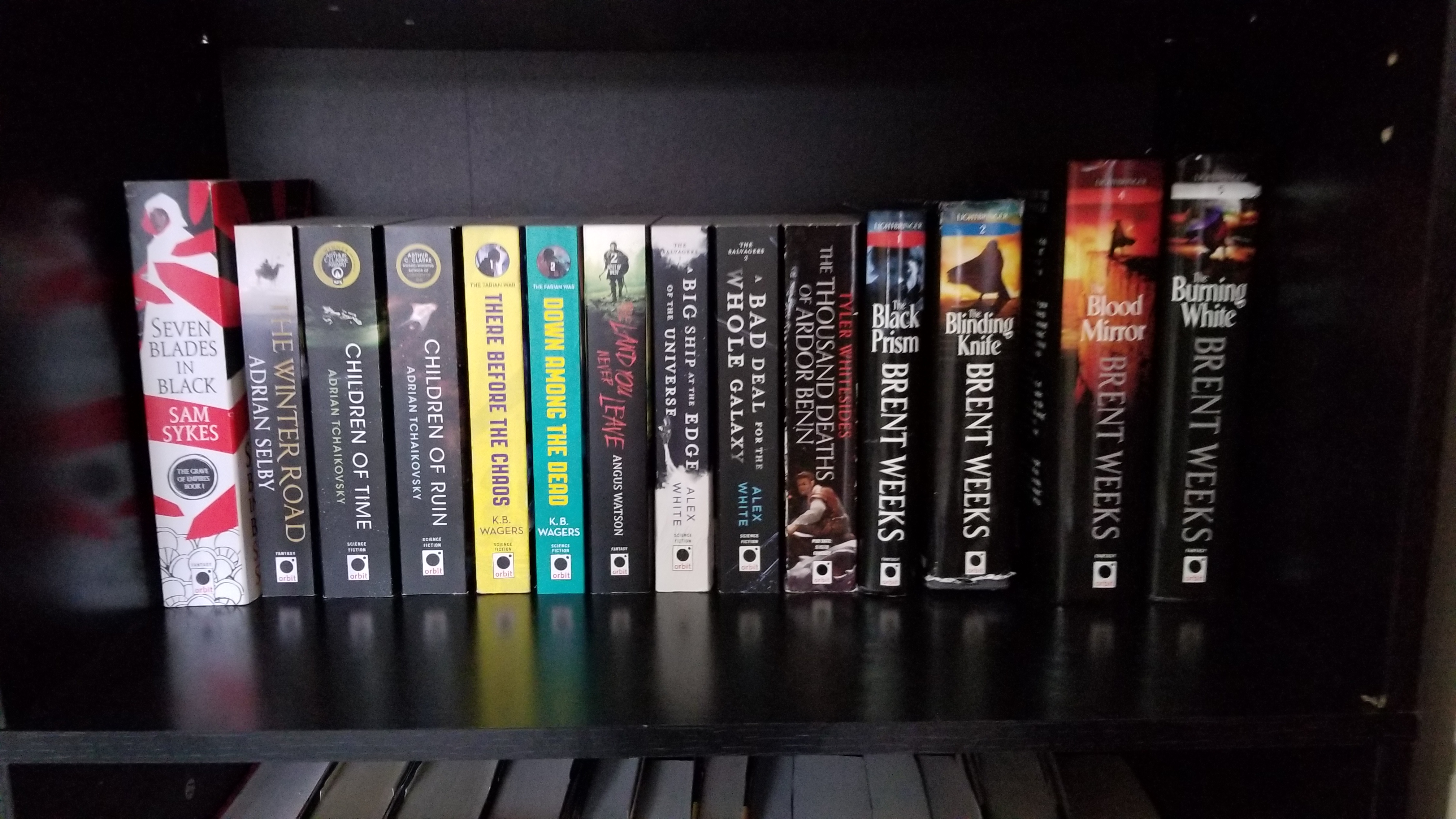 Ahhhh, such fondness I have for this shelf. Seven Shades in Black! The Thousand Deaths of Ardor Benn! BRENT FUCKING WEEKS (missing The Broken Eye because I’m currently having my heart ripped out by that reread). So many good books, so little time. 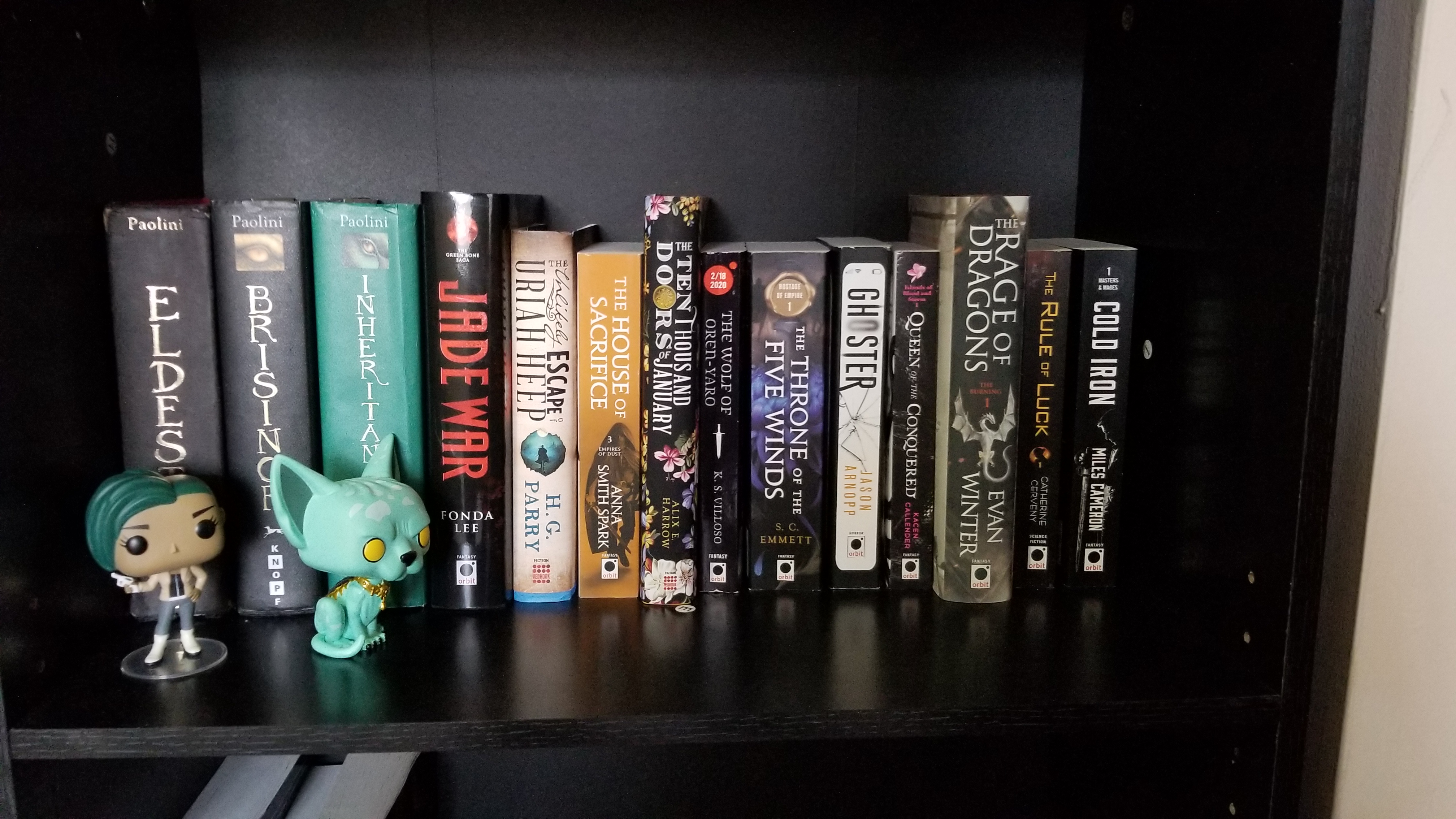 As you might be able to discover, there are a few books on this bookshelf that don’t belong amongst the Orbit crowd, but Paolini’s Inheritance Cycle are beasts I couldn’t figure out where else to put them, so here they stay, for now. I also have the most unread books on this shelf, I believe, but don’t take that to mean I’m not terribly excited to read all of them–hopefully this year! 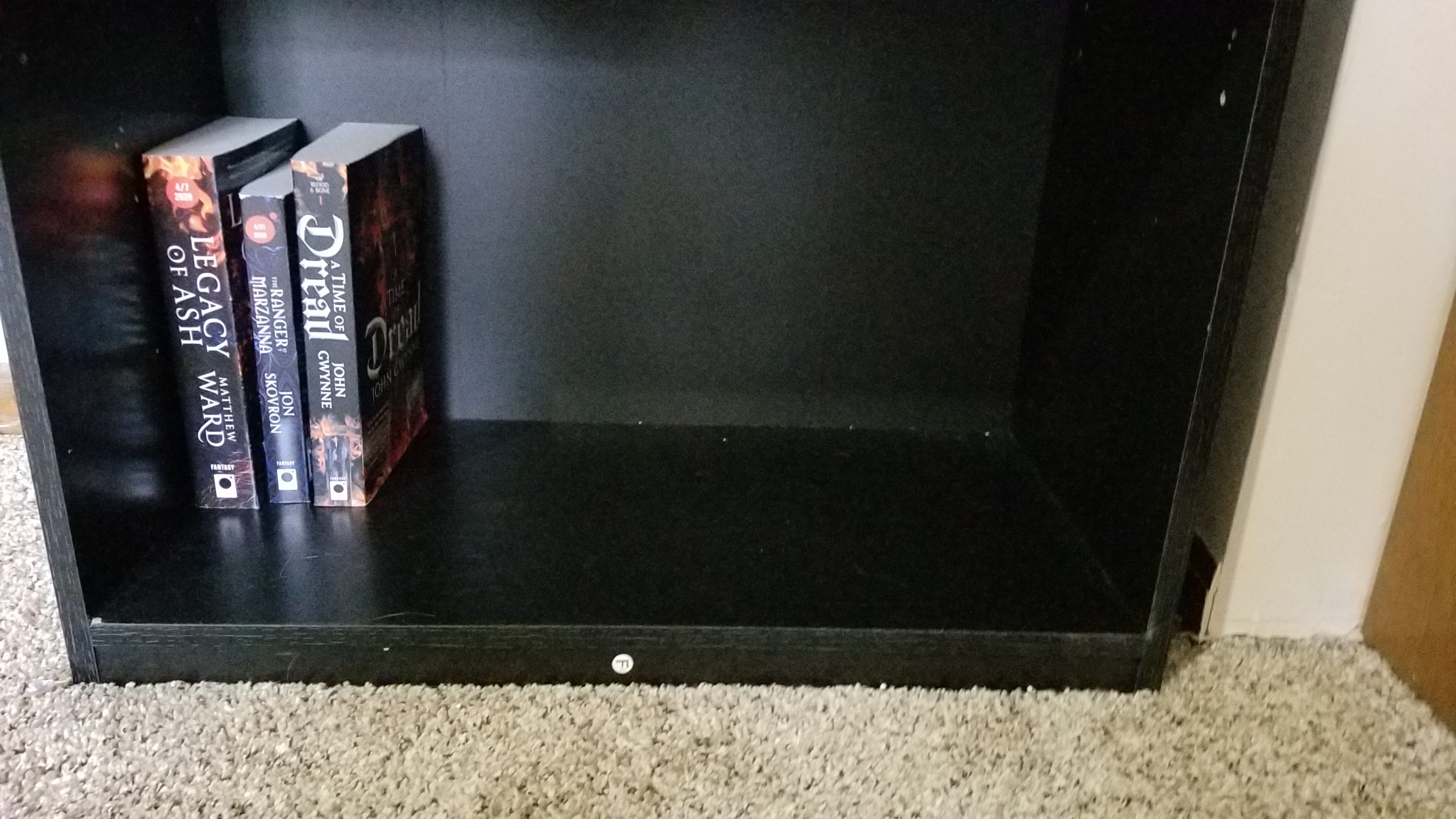 And this bottom shelf is my latest editions I was too lazy to put in their proper places. All unread, but I’m quite excited to read them! I have always wanted to read Gwynne and am quite behind on that, so I am hoping to finally read him this year! And I am SO excited about The Ranger of Marzanna and while Legacy of Ash was a surprise, it sounds completely up my alley (it is Orbit, after all) and I’m excited to read it!

And that’s my Orbit Bookshelf! I’m pretty proud of it and very excited to be working with Orbit as one of their reviewers. I am very lucky to receive so many ARCs from them, as they are my absolute FAVORITE publisher–I love almost every book they publish and I hope to be published by them myself, one day! As you can see, I’m quickly running out of room for any more books and, with all the quality releases come out this year, that is going to become a problem…but one for future me to deal with. 😛

What about you? Do you like to collect books physically? Own any of these or want to read them? Let me know in the comments!