Last Updated on July 29, 2019 by ThoughtsStained

Hello, lovelies!
It’s been a minute since I’ve written a personal post on the blog (yay depression spikes and having no time to do anything else), so I thought I’d steal some time to do so today. It’s a follow up post to one I wrote about a little bit ago, where I ranted about how surprised I was on the difficulties of raising a puppy (oh, my naive, naive little brain). It a month to the day since we got Dovahkiin and brought her home and into our lives and let me tell you, friends, it’s been an absolute whirlwind.
I’d say, for the first two weeks, I regretted ever wanting to get a puppy. 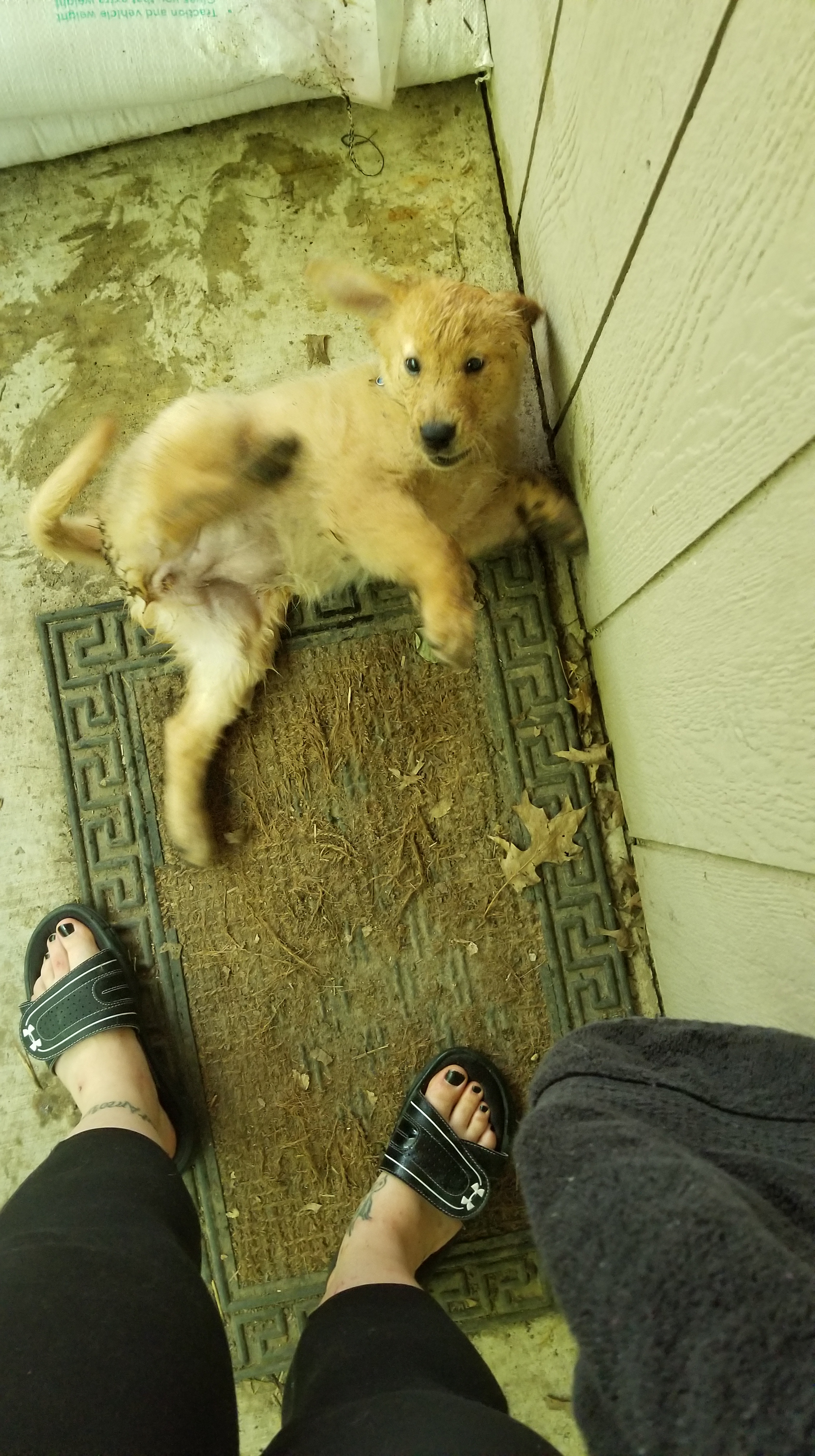 She wouldn’t sleep. She barked all night in her kennel. Biting everything, never going to the bathroom outside, being picky about her food. And I was so frustrated, because we were doing everything “right”. Our breeder, our vet, friends, family, the internet–any time someone was kind enough to listen to me bitch about how tired I was, how frustrated I was, how depressed this puppy was making me and how guilty I felt about all of it; they’d listen and offer advice and our response became our refrain.
“Oh, we’re doing that.”
“What? And that’s not working? And she’s still doing X?”
*tired sigh while she tries to resist just bawling*
It was…really hard. I’m a borderline perfectionist but a definite goodie-two-shoes, so I want to do things by the book. I want to follow the rules (unless bending them makes more sense, but that’s a whole ‘nother complication for another day) and I want to do things right. It’s a core need for me. So, in all the research I learned about how to raise a puppy, kennel training her was one of those main things you are supposed to do.
But, I learned something important from this pup.
You have to live life as you experience it, not how someone else tells you to.
Despite my protests, despite worrying we were taking a step in the wrong direction, despite feeling like a major failure, I finally relented to my boyfriend’s suggestion and, at the start of week four, we went to the store and got enough baby gates to block off our kitchen. We set up her dog bed in there, with a few toys and her food bowl, and then let her sleep there. The first few nights of doing that, she’d still whine and bark, having to go out a couple times a night (in comparison to on the dot every 45 minutes) but we were getting multiple hours of uninterrupted sleep. It was a lot better. 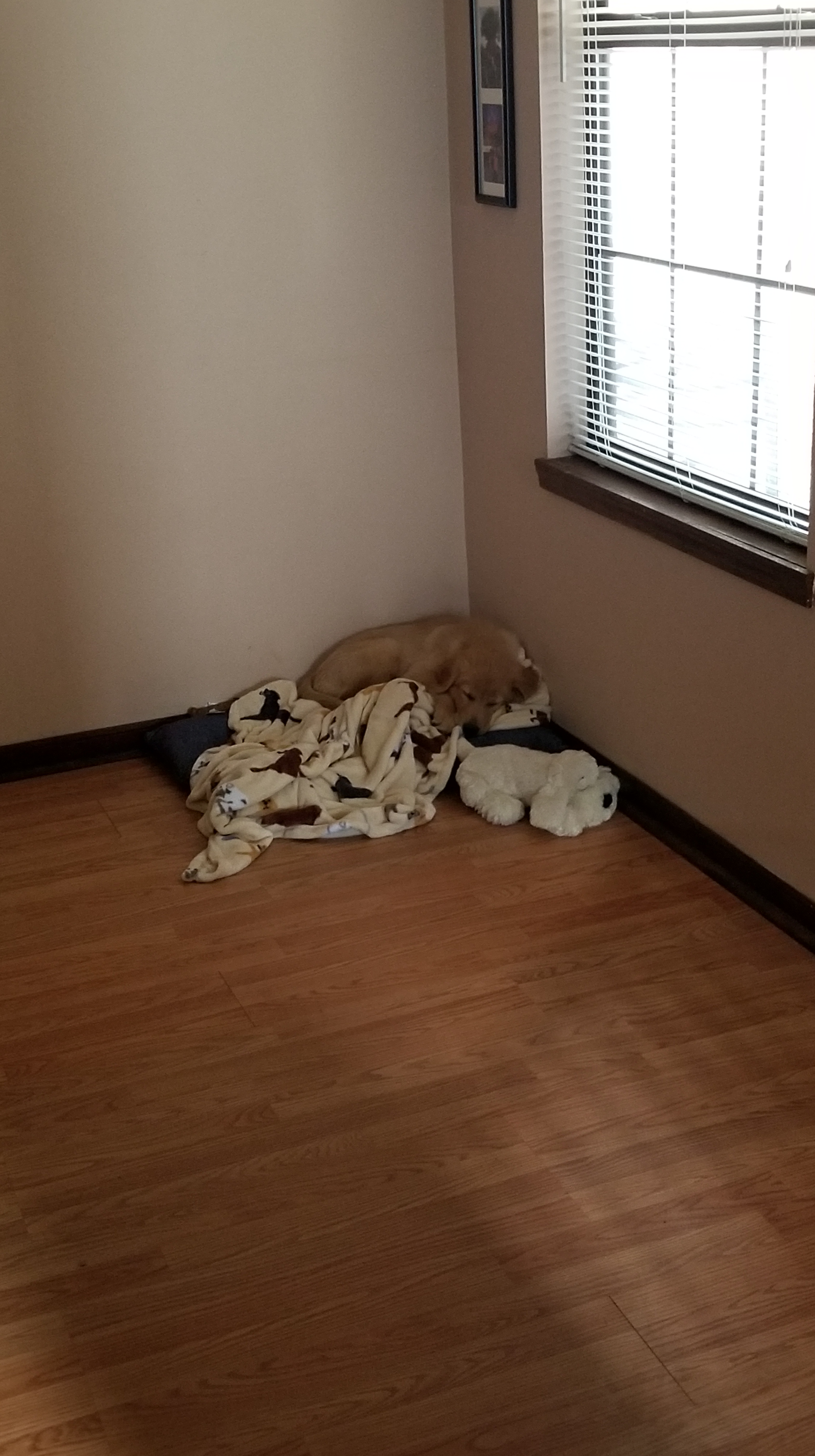 And then, one night, my boyfriend forgot to set his alarm at 2am to take her out (as we were trying to teach her set times we’d take her out). My alarm went off at 6am to get up with her and start the day. I go downstairs and she’s awake, ready to go outside. No accidents in the kitchen. When I talk to my boyfriend later that day, we realized he didn’t take her out at 2am and that she’d slept–or at least hung out quietly–in the kitchen from 10pm to 6am.
And she’s done that now for the past four nights, with only one accident.
No barking.
No whining.
Just…sleeping.
We switched her food, too, so now she’s eating more regularly. She still gets a little car sick, has the occasional accidents and bites a lot. But she’s much happier. She asks to go into the kitchen to take naps during the day. She’s comfortable to let us hang out in the living room and stay in there, instead of having to be around us constantly. I’m able to get roughly seven hours a sleep a night, instead of the two-three we’d averaged for almost a month. She’s started to really enjoy her forever home as her personality continues to shine.
And I’m…starting to really, really love her. 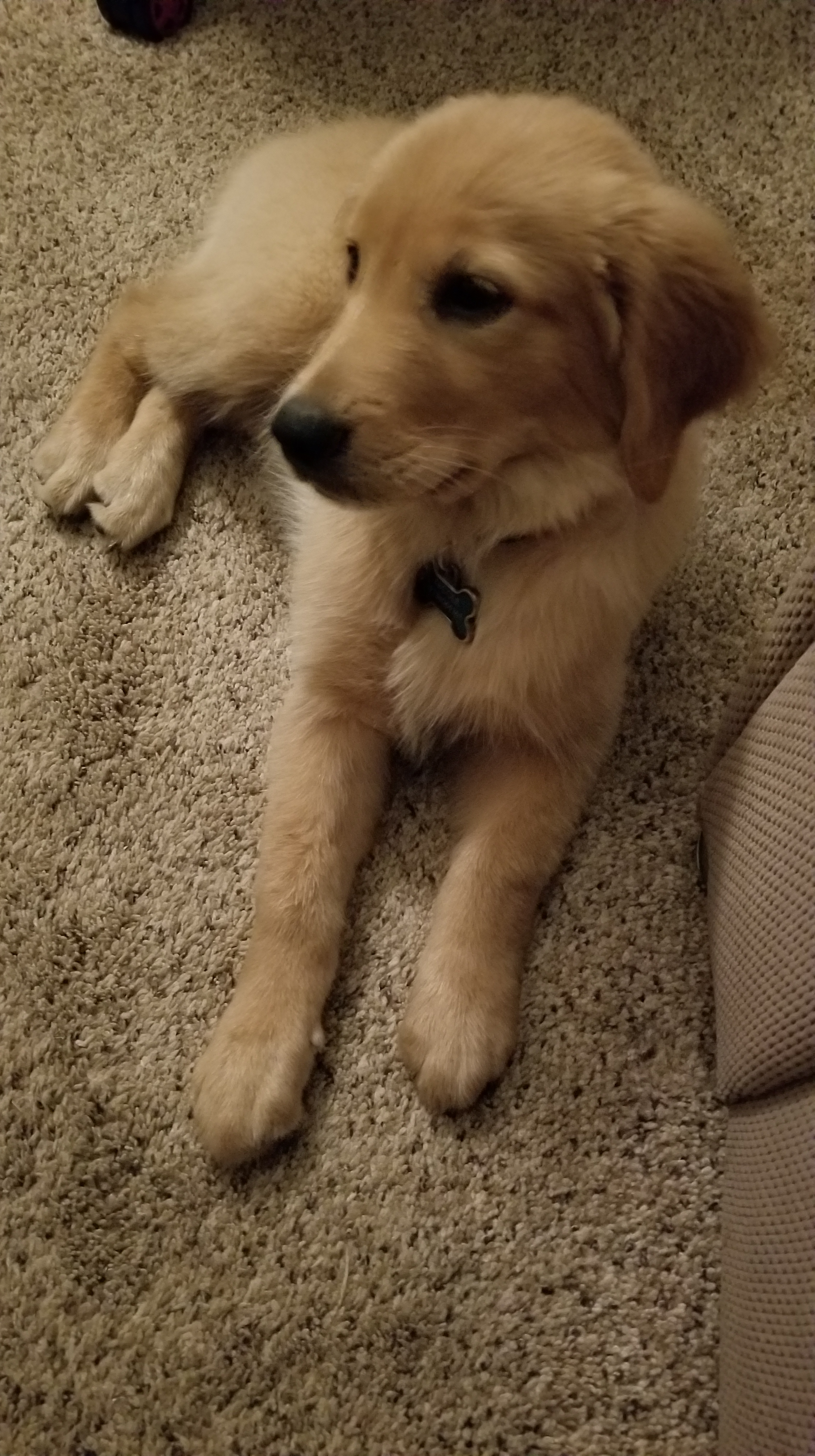 Of course, there are still challenges. There are still rough days, moments when my patience runs out and times when owning a dog becomes a lot more complicated. But after I stopped looking at the situation as, “This is what I’m supposed to do, you (Dovah) need to adapt to this,” and instead looked at it as, “This is what you need, so let me adapt to help us both”?
Friends, it is night and day.
So, I guess I’m just saying, if things aren’t going your way; if something is challenging you, upsetting you or just feels impossible; don’t be afraid to take a step back and try and look at it from another angle. Have faith in yourself and know that everything can change, if you’re willing to ignite it and stay adaptable.
Oh, and, ah, be watching this space, friends! In the midst of sleep deprivation and second guessing my entire life choices, things have been going on behind the scenes at Thoughts Stained With Ink. And I’m pretty stoked to bring them all to light for you soon (like, this Thursday levels of soon)!
Cheers.