Last Updated on October 24, 2019 by ThoughtsStained

I’ve never really done a batch of mini reviews before, but I’ve really enjoyed reading them from others when they post them and honestly, I think I have a good batch of books where mini reviews fit better than full reviews! I’m not sure how often I’ll end up doing this, but for now, here’s a few reviews over the books I’ve read recently!

Title: System Failure
Author: Joe Zieja
Publisher: Saga Press
Blurb: War is spreading through the galaxy—and it’s becoming abundantly clear that there’s an outside force at play in this explosive and hilarious new installment of the Epic Failure series that reads like Catch-22 meets David Weber.

With the galaxy thrown into chaos by mutual breaches of the Two Hundred Years’ peace, what seemed like an isolated incident on the Thelicosa/Merida border has become an epidemic. In the midst of this chaos, the Thelicosan and Meridan fleets on their respective borders have come to a sort of tense peace after the events in Book II but now it’s clear: somebody wants war. And it’s not the Free Systems of the galaxy.

No. It’s a mom-and-pop convenience store gone galactic. It’s the purveyors of balloons and nachos and supplies for bowling lanes. It’s the company that made the droids and a large part of the technology that all of the Free Systems are using in their militaries.

It’s Snaggardirs. And they want to snag it all. 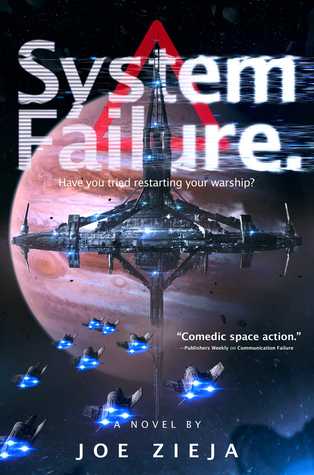 This was one of my more anticipated reads for the year, because I absolutely loved the first book of this series, Mechanical Failure. It was unlike anything else I’d read before and I just really enjoyed this comedic space opera! I enjoyed Communication Failure as well, so I was really excited to see how this book ended the series! In a weird turn of events, I just sorta liked it? Like, I enjoyed reading it, I was still rooting for Rogers and the Viking and I really enjoyed how it ended (especially with some of the twists) but I didn’t fall in love with it like I had with the first novel of the series? I’m not disappointed by it at all or anything, either, which is interesting. I think I just wasn’t in the right frame of mind to read it, honestly.

Although, Deet was still the best [EXPLETIVE] character in the entire series and no one can tell me differently.

Title: Heathens
Author: Natasha Alterici
Publisher: Literati Press
Blurb: Heathen Volume One collects the first four issues of the acclaimed fantasy series from creator Natasha Alterici. Aydis is a young Viking woman, who after being banished from her home, sets out on a mission to right the wrongs of a corrupt god. Her first move is to find and free the cursed Valkyrie Brynhild. Gods, demons, and creatures of lore, Heathen is packed with fun intriguing characters and lavish artwork. The trade features an oil painting cover, cover gallery, and a forward by award winning lesbian fiction author Geonn Cannon.

I really enjoyed this! I haven’t gotten into comics too much (I’ve only ever read the first three volumes of Saga, got addicted and then have become too scared to continue–so please, NO SPOILERS) but Destiny @ Howling Libraries mentioned Volume Two coming out for this comic series and it seemed really interested to me! I mean, you had me at lesbian vikings. And I did really enjoy it! I thought the artwork was quite stunning and I really liked the style and I thought the story itself was very interesting. My only complaint is that it was so short and the story itself just felt cut off at the end and I would have liked a better cut off point? But, that could also just be my own unfamiliarity with comics as an artform, so I’m definitely excited to continue reading and see what happens next!

Title: A Trace of Copper
Author: Anne Renwick
Publisher: Anne Renwick
Blurb: New recruit to the Queen’s agents, Dr. Piyali Mukherji is given a simple first assignment. Travel to the small Welsh village of Aberwyn and solve the mystery of a young woman’s blue skin lesion. A challenging task, for the alarming infection is unlike anything she’s seen before—and it’s spreading.

Evan Tredegar, the town’s pharmacist and the only man to ever capture her heart, knows more than he’s telling. Despite his efforts to push her away, her touch reawakens old desires. As more villagers fall victim to the strange disease, he’ll have no choice but to reveal his secrets, even if it means sacrificing his freedom.

Together they must move past broken promises, capture a rogue frog, and stop the infection before it spreads out of control.

I enjoyed this one! If you follow my reviews, you know that I just adore Renwick’s steampunk novels, so I was excited to dive into one of her novellas! And though I did enjoy this–I liked the setting, I thought the characters were pretty neat and I enjoyed the romance and the main plot–I think novellas might not be the best avenue for me, because it just felt way too short to me, and I would have rather read this entire story fleshed out into a novel-length work. But, I still enjoyed myself and the quick read and still plan to read the rest of her novellas!

And there you have it! I actually quite liked doing those mini reviews (especially because sometimes, unless you just passionately hated it or passionately loved it, it’s just hard to come up with what to write for a proper, full-length review). I may do this more in the future (especially if I read more comics or novellas!), so I hope you enjoyed it and potentially found a new read to bury your TBR with!