Blurb: Three years ago, London society changed forever, with a revolution placing the widowed Queen firmly on the throne her blue blood husband tried to take from her. Humans, verwulfen and mechs are no longer considered the lesser classes, but not everybody is happy with the new order…

Entire families have gone missing in the East End. When Caleb Byrnes receives an invitation to join the Company of Rogues as an undercover agent pledged to protect the crown, he jumps at the chance to find out who, or what, is behind the disappearances. Hunting criminals is what the darkly driven blue blood does best, and though he prefers to work alone, the opportunity is too good to resist.

The problem? He’s partnered with Ingrid Miller, the fiery and passionate verwulfen woman who won a private bet against him a year ago. Byrnes has a score to settle, but one stolen kiss and suddenly the killer is not the only thing Byrnes is interested in hunting.

Soon they’re chasing whispered rumours of a secret project gone wrong, and a monster that just might be more dangerous than either of them combined. The only way to find out more is to go undercover among the blue blood elite… But when their hunt uncovers a mysterious conspiracy, Byrnes and Ingrid must set aside their age-old rivalry if they have any chance at surviving a treacherous plot.

Okay, how did anyone let me forget how INCREDIBLE of a writer McMaster is?

Seriously. I binge-read McMaster’s London Steampunk series, the series that got me into steampunk romance in the first place and I adored every single second, and have constantly been on the hunt for more steampunk romance to fill in the gaping hole that series’ completion left in me.

So, when I found out that she wrote a Blue Bloods Conspiracy series–which is basically a sequel series to my aforementioned love, as it continues years later with both some new faces and old–I was so ecstatic and couldn’t wait to read it. 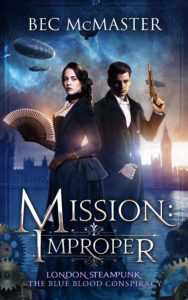 And then years went by and I checked out Mission: Improper numerous times from the library, yet kept turning it back in, unread. For one reason or another, I just wasn’t getting around to reading this book.

It only makes sense, then, that when I finally DO sit down to read it, it’s after I get home from work around 1am and I end up staying up until almost four in the morning because I cannot put this bloody thing down. Then, the next night, I do it all over again and finish reading this book in two sittings.

It’s not only that McMaster’s world is so compelling and so fleshed out. It’s not just that the main, political plot is just as interesting as her romance plot. It’s not only the fact that her characters are amazing and she finds a new way to make every romance feel fresh and unique and utterly captivating. It’s not even that she writes some of the best sex scenes I’ve ever read.

It’s that her novels do all of this, on a consistent basis, every single time.

And I just bloody love them.

To the point where I may have already read the sequel and have already requested my library purchase the third one and am definitely requesting the next two in the series when my “Suggest a Purchase” recommendations resets here in October.

Read this series, fam. Read this author, who writes so many books, I can’t keep up, but I’m totally content to just binge her work until I do. I promise you won’t regret it.