This is going to be a slightly different review, as I’m doing a joint book and film review all in one! I don’t think I’ve ever done a joint review like this before, so we’ll see how this goes…
I started to read Mortal Engines by Philip Reeve after going to see the cinematic adaptation, produced from the genius of Peter Jackson and fellowship. The film, I truly enjoyed, despite the critics responses (but that’s usually how it goes with me and films, honestly). I thought it was stunning, visually. I enjoyed the acting (and Robert Sheehan is not bad to look at in the slightest), the score and I thought it was a really interesting film. I loved this dystopian punk feel, getting to experience the airships and the fantastic visuals and smaller details, well, detailed about some of the cultures. And the moving cities? No one can tell me those aren’t seriously freaking cool.
Where the film fell short for me is actually exactly where the book fell short to me; to the point where, though I’ll prolly buy the film just to enjoy it once again once it comes out on DVD, I actually put the book down and officially DNFed it after roughly 100 pages.
Because I was never fully grounded in the lore.

I get the basics of it. In both, I love how we immediately start in on the action, on a chase, as the moving city of London chases down and engulfs a smaller mining town to scrap for parts and people. And it wasn’t hard to follow the revenge plot of Hester Shaw (prolly one of the coolest names, though, not going to lie?!), nor the dreams of Tom Natsworthy, which suddenly becomes complicated once he learns that Mr. Valentine isn’t the hero and scholar he always assumed he was.
But what I wanted was the backstory, the worldbuilding, the history. We know humans as we are now are in the past, known as The Ancients. We know that tech both has evolved beyond our understanding, yet also simplified back to before anything we know today. We know there was a war–assuming nuclear–that destroyed it all and these moving cities rose from the ashes and life continued on.
It’s a fair amount, don’t mistake me. But I didn’t fully understand the war of the Ancients, the timeline of how humanity get to where it was. Because I didn’t understand the history, I couldn’t understand the factions–city dwellers and Anti-Tractionists, at least–and what they were truly fighting for, where they had come from and where they hoped to go. And because I couldn’t understand that, I couldn’t become fully invested in the world that just looked so incredible on screen and I wanted to come alive on the page, to get more detail to truly cement my knowledge before I rewatched the film with a clearer understanding of how we got to where we are. 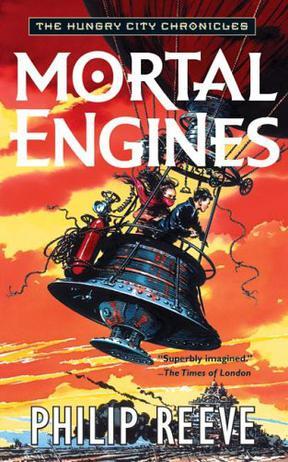 I got the book from the library and was surprised that it was less than 300 pages long. For me, that’s a short book (but totally my own opinion, considering a 600+ book is a usual weekly read for me), so I was concerned that we wouldn’t get the level of worldbuilding I was searching for, on top of everything else that happens (and a lot of other things happen; this story is not lacking in content).
So when I got 100 pages in and still didn’t have a clearer understanding of the history, I was disappointed and started catching myself glancing down at the page count, hoping I was getting closer to the end and realizing I still had almost 200 pages to go, when I had so many books sitting on my shelves, still waiting to be read.
So, I DNFed and I feel guilty doing so, because I honestly believe it’s a quality book. That’s the reason I still gave it three stars on Goodreads, despite not reading it in it’s entirety. I think, had I not seen the film before hand, I would have finished this book and enjoyed it quite a bit. But because I saw the film first and then had little to no knowledge about the book other than that, I created an expectation inside my head: one of a massive epic, detailing rich histories with this in-depth, elaborate world between fighting factions struggling to survive and centered around this quest for revenge and this enlightenment of how the real world works when you see it from a different point of view.
I…didn’t get that in the book as it is and I think it’s unfair for me to discredit the book for that, because I don’t think it was ever advertised as being that. It’s a children’s book that has the perfect tone and length to match, but I had created an adult epic inside my head and was disappointed when the book wasn’t that, which is no fault to the book or author. Frankly, I just have too many books to read–that I really want to read–to continue reading a book I’ve already made my mind up about.


So, I’d recommend it, honestly, as long as you read it for what is in, instead of creating your own expectations inside your head. I’d recommend the film, too, honestly. I’m disappointed it didn’t do too well, because I was really hoping for a sequel, because I think it’s really promising and well done, personally. But I’m not keeping my hopes up for it.
Read on!

Previous Post: « The Mind Trap of Advertising Commercial Holidays: Valentine's Day Edition
Next Post: Top Ten Tuesday: Books I Want Goodreads to Love As Much As I Do »