Hello, dear readers!
Last year, I did a series called my Reading Outlook, which was basically like a goal TBR shelf I wanted to pull books from to read for the year. Though I positively love reading monthly TBR lists, I’m just never organized enough to do that and the pressure of listing books and then not being able to read them in time is a bit too much for your girl (plus, I kinda like the freedom to be able to read whatever happens to fall in my lap, instead of sticking to a set schedule).
That being said, I do like having a general list of the books I hope to read over the year and if you followed along at all last year, you’ll know that I had 58 books I wanted to read, a fair mix between new books and rereads, and I managed to read a whopping eight of them.
I’m hoping to do a little bit better this year. This isn’t an exhaustive list, by any means. I know there are tons of books I’m not even aware are getting published this year that I’ll want to read and books I’m anticipating, yet completely forgot about. So the majority of books on this list are the books I already own and want to read. To help with this a little bit (and the lack of storage space in our closet where my books are currently being held until we move into a house this summer), all of these books I moved to the shelves behind my desk at work, so I can actually see them and they’ll be easier to pick up during my dinner breaks and the like. 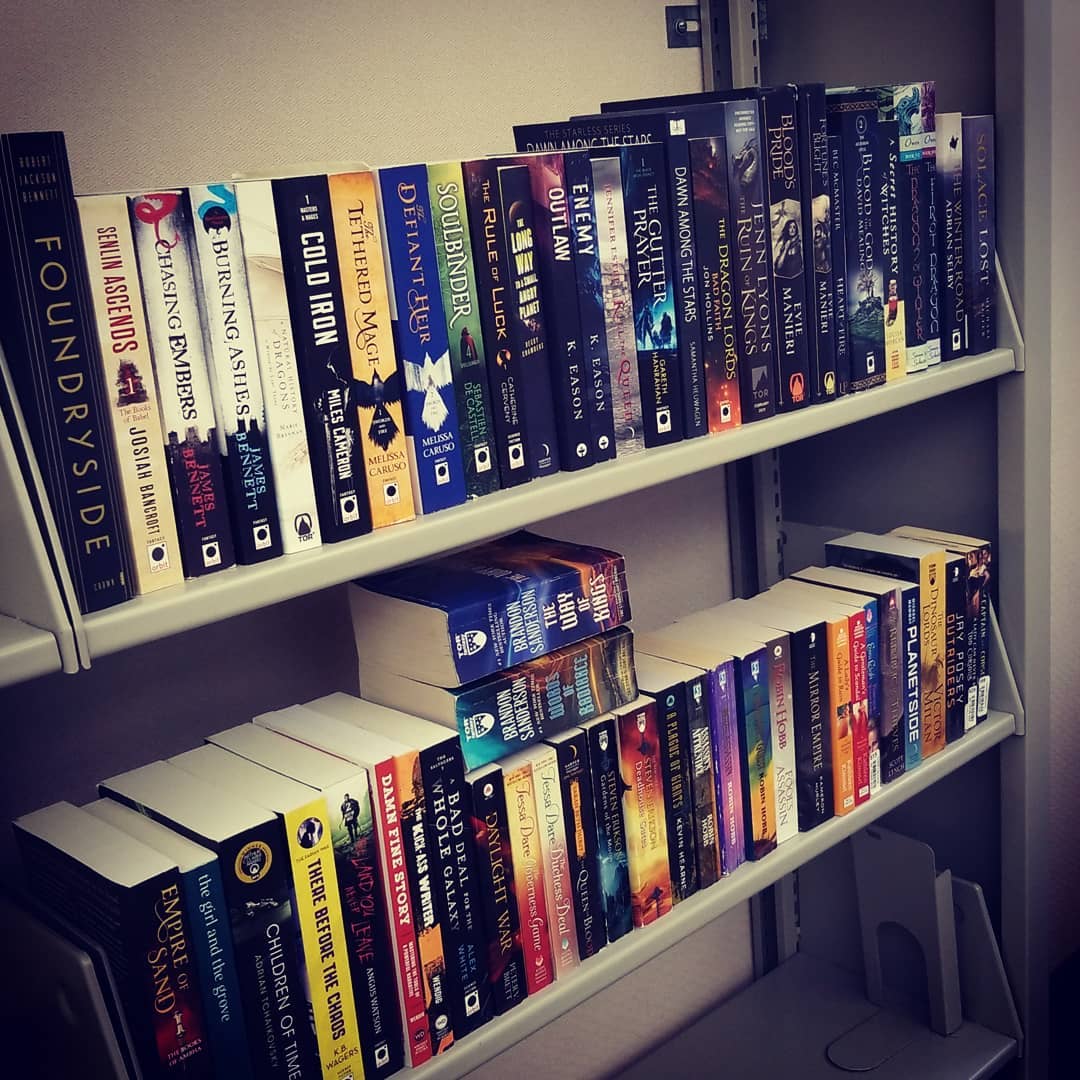 They are, as follows (please ignore any inconsistencies in alphabetical order; it’s close enough):

Foundryside by Robert Jackson Bennett
Senlin Ascends by Josiah Bancroft
Chasing Embers by James Bennett
Burning Ashes by James Bennett
A Natural History of Dragons by Marie Brennan
Cold Iron by Miles Cameron*
The Tethered Mage by Melissa Caruso**
The Defiant Heir by Melissa Caruso**
Soulbinder by Sebastian de Castell
The Rule of Luck by Catherine Carvey
The Long Way to a Small, Angry Planet by Becky Chambers
Outlaw by K. Eason*
Enemy by K. Eason*
Kill the Queen by Jennifer Estep
The Gutter Prayer by Gareth Hanarahan
Dawn Amongst the Stars by Samantha Heuwagen*
The Dragon Lords: Bad Faith by Jon Hollins
The Ruin of Kings by Jenn Lyons*
Blood Price by Evie Manieri**
Fortune’s Blight by Evie Manieri
Heart of Fire by Bec McMaster
Blood of the Gods by David Mealing*
A Secret History of Witches by Louisa Morgan
The Dragons of Winter by James A. Owen
The First Dragon by James A. Owen
The Winter Road by Adrian Selby*
Solace Lost by Michael Sliter*
Empire of Sand by Tasha Suri*
The Girl and the Grove by Eric Smith*
Children of Time by Andrian Tchaikovsky*
There Before the Chaos by K.B. Wagers*
The Land You Never Leave by Angus Watson*
Damn Fine Story by Chuck Wendig
The Kick-Ass Writer by Chuck Wendig
The Way of Kings by Brandon Sanderson**
Words of Radiance by Brandson Sanderson**
A Bad Deal for the Whole Galaxy by Alex White*
Daylight War by Peter Brett
The Governess Game by Tessa Dare
The Duchess Deal by Tessa Dare
The Queen of Blood by Sarah Beth Durst
Gardens of the Moon by Steven Erikson
Deadhouse Gates by Steven Erikson
A Plague of Giants by Kevin Hearne
Assassin’s Apprentice by Robin Hobb
Royal Assassin by Robin Hobb
Assassin’s Quest by Robin Hobb
Fool’s Assassin by Robin Hobb
The Mirror Empire by Kameron Hurley
A Lady’s Guide to Ruin by Kathleen Kimmel*
A Gentleman’s Guide to Scandal by Kathleen Kimmel*
Forever Your Earl by Eva Leigh
Republic of Thieves by Scott Lynch
Planetside by Michael Mammy
The Dinosaur Lords by Victor Milan
Outriders by Jay Poser*
A Lady Can Never Be Too Curious by Mary Wine
A Captain and a Corset by Mary Wine

** Denotes a reread, * denotes either an ARC or the copy was received for review

Originally, I didn’t think it was that many books. But after typing all of that out…it’s a whole lot of books. Actually, after counting, it totals to 58 books…again, completely on accident. Interesting. A good number of those are books I’ve either received for review (some of which I’m a good number of years behind, I am so sorry) and others ARCs leftover from last year. Others are a few rereads I want to read, either to continue reading or wrapping up a series. A good deal more are books I’ve just completely overdue in reading.
Of course, there are other books I don’t own that are also totally on my hopeful-to-read in 2019 list. Some highlights include:

Oathbringer by Brandson Sanderson
The Burning Light by Brent Weeks
Velocity Weapon by Megan O’Keefe
Never Die by Rob J. Hayes
Nightchaser by Amanda Bouchet
Shatter War by Dana Fredsti and David Fitzgerald
The Court of Broken Knives by Anna Smith Spark
City of Lies by Sam Hawke
The Unbound Empire by Melissa Caruso
Fear the Stars by Christopher Husberg
Phoenix Unbound by Grace Draven
Soul of Stars by Ashley Poston
Priest of Bones by Peter McLean
The Path of Flames by Phil Tucker
Chasing Graves by Ben Galley
The Priory of the Orange Tree by Samantha Shannon
Trail of Lightning by Rebecca Roanhorse
The Wolf of Oren-yaro by K.S. Villoso

Still further are all the books I’ve forgotten and all I’ll discover along the way. Not to mention the nine finalists for SPFBO. There are a lot of good books to look forward to in 2019 and already not enough time to read them all. Hopefully I make good on my promise to lessen my time on social media so I can give myself a fighting chance.
Any of these books on your list? Any books I should add onto mine? Let me know in the comments below! I’ll post an update at the end of March of how I’m doing on this massive list. Until then, may your pages be ever turning as you read just one more chapter.
Read on!