Last Updated on June 21, 2018 by ThoughtsStained

Title: Season of Storms
Author: Andrzej Sapkowski
Publisher: Orbit Books, May 2018
Blurb: The New York Times bestselling series that inspired the Witcher video games.
Geralt of Rivia. A witcher whose mission is to protect ordinary people from the monsters created with magic. A mutant who has the task of killing unnatural beings. He uses a magical sign, potions and the pride of every witcher — two swords, steel and silver. But what would happen if Geralt lost his weapons?
In this standalone novel, Geralt fights, travels and loves again, Dandelion sings and flies from trouble to trouble, sorcerers are scheming … and across the whole world clouds are gathering – the season of storms is coming…

I have mixed feelings about this book.
I don’t think it has anything to do with the quality of the writing itself or the translation, done by David French. Or even the story itself. Obviously the Witcher series is well loved by a lot of people–and it should be! The lore is incredible, the idea of Witchers and the complex reception they get from the world around them adds a realistic aspect we don’t always see our heroes face and Geralt of Rivia is as complex as they get.
Except, I didn’t really get any of that from reading Season of Storms.
I got all that by playing CD Projekt Red’s The Witcher III: The Wild Hunt.


And perhaps that’s my issue. Perhaps being introduced to the game first, rather than reading the novels beforehand, is why, although I liked the book, I didn’t fall in love with it, even though I’ve spent countless hours (I’m talking months) dedicated to playing as Geralt on my PS4. There are probably a handful of reasons why, so far, after reading two different books in the Witcher series, I haven’t fall in love with either one, even though I know they are good stories.
For me, I couldn’t become grounded within the story. I think part of it is treating the video game’s rendition of lore and events as law, so when plot points conflicted in the book with that lore, I saw them as wrong, when in reality, the books are in the right. But not only that, the book was very, very dialogue heavy. Often, characters would go on page-length rants about topics that, to me, felt unrealistic and inconsequential. Oftentimes, a character would approach Geralt and start talking and we didn’t even realize the character approached. There was no narrative, only dialogue. As a result, a lot of information was told through dialogue that could have easily been told through narration, avoiding the phrases like, “But why am I telling you all this? You already know!” 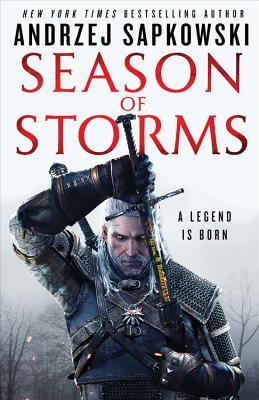 Also, the plot. Perhaps if we had some sort of prologue or some sort of beginning that explicitly stated we’d be following Geralt along on his quest to find his stolen swords, I might have received it a little more kindly.** But instead, I just kept waiting to see what the main plot was, only to find out that exactly what it was: him trying to find his swords and getting caught up in quests along the way. Don’t get me wrong: that’s not necessary a bad plot, in and of itself. I just was…expecting something different, I guess, so I was caught off-guard.
Overall, I didn’t dislike this book. I just didn’t love it as much as I wanted to. I recognize that a lot of that can be attributed as my fault as the reader, considering my prior knowledge and exposure is taken from a different medium which tells, as far as I understand, a story that isn’t told within any of the books (at least, not directly). But also, these books are a translation from Polish. Sapkowski is the only Polish author I’ve read, so I have no idea the writing style and culture of Polish writers. Perhaps heavier dialogue is a commonplace trait within that culture that I’m ignorant of.
These factors included, at the end of the day, this book wasn’t my favorite, but it wasn’t the worst I’ve ever read, either. If you’re interested in the Witcher series at all, I highly recommend you check this series out and form your own opinion, especially because I think I’m in the minority here, with mine.
Read on!
** I realize that it says this on the back cover, but I got an ARC copy of this book, so the back cover wasn’t finished yet, so I didn’t actually have a little teaser like that before I read.