THIS BOOK, YOU GUYS.
Secret #1: Every good seduction begins with a baited hook.
Okay, I’ll just calm down for a second so I can explain why this was the best romance I think I’ve read so far–or, at least, in a long while. It ranks up with my all-time favorite (which started my romance binge) Any Duchess Will Do by Tessa Dare.
I first got into reading romance perhaps barely a year ago. I’m no expert by far, only having read a handful of authors, but I think I’ve mentioned in a previous book review that I don’t read romance novels for the intricate plot, the crazy twists or to be left an emotional, choking-sob wreck by the cliffhanger that I was forced to deal with, regarding characters that I am equally emotionally invested in as I am real people. If I find a romance novel that does all that and what I want…well then, that’s just bloody impressive (as I haven’t found one that does). No, I read romance to fall in love for the evening, to be wooed.
In the bluntest of terms, to be seduced.
I’m a single woman who gets lonely and I’m not ashamed to admit that on particularly lonely nights, I make sure to have a small stack of romance books to keep me company; to keep me up until three in the morning, my stomach filled with butterflies and heat rising to my cheeks as chills travel down my spine. When reading a romance, I want to feel like the devilish rogue, dashing prince or charming scoundrel is talking to me, trying to make me fall in love with him; a perfect escape from my romanticless-reality. When the woman he is actually wooing in the story feels chills, I want to feel chills; when her breath accelerates, mine should; when she feels his breath against her neck, I want to question whether or not I felt it, too. That’s what I want when I read a romance novel. That’s what I mean when I say seduced. It’s been a while since I’ve read a romance that had this affect on me.
Cue Seven Secrets of Seduction by Anne Mallory.
This book follows the life of Miranda Chase, who is the protagonist that I wish every romance could follow, because I connected with her so well. One, she worked in a bookshop. Two, she was a bookworm, with books being her first love. Three, the book opens up with her reading so deeply, she doesn’t have a care in the world for a man who is trying to gather her attention. Four, she has a guilty pleasure of reading illuminations and wondering what it would be like to be wanted like that. Five, she has to go and work for the Viscount, organizing his massive library. Six, she questions her own worth and why someone would ever one pay attention to her romantically, compared to everyone else in the ton. She’s just a lowly shop girl, after all. 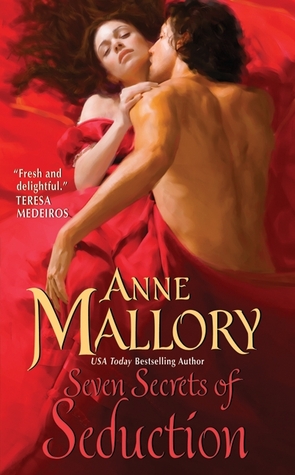 Basically, she’s me, living a life that I wish I could have had, if I lived in that time period. So the fact that I could relate to her so well made it possible for everything that happened to her feel so real to me, which is exactly want I wanted; to escape into her life and her troubles and her passions, if only for a few hours.
Cue the source of all of them: Viscount Maximiliam Downing.
Uh-huh.
The fact that he didn’t hide his intentions–well, okay, he sorta didn’t, but I won’t spoil it for you–at the beginning and began trying to win Miranda over at the start was amazing. He is a fantastic flirt. The fact that the first scene that made my breath catch occurred in a library–I mean, c’mon, the location itself is swoon-worthy even if nothing swoon-worthy ever happened there (thankfully, that was not the case here). The fact that I got literal chills multiple times reading this book is the reason I’ve already put the next two in the series on hold at the library.
I guessed the twist in the plot way early on, so no surprises there. The ending wasn’t exactly fireworks. Of course, considering my eyes had started to hurt 100 pages previously and it was past three in the morning when I finished the book didn’t give the ending any help. Yet neither of those facts bothered me much, because this book did exactly what I wanted it to. Moments left me breathless, laughing aloud at my own foolishness at being wooed so easily by a book character; gave me chills, tingling deep down into my fingers and making the back of my neck heat up. For a couple hundred pages, I was very successfully seduced.
And I’m ready for round two.
Read on!