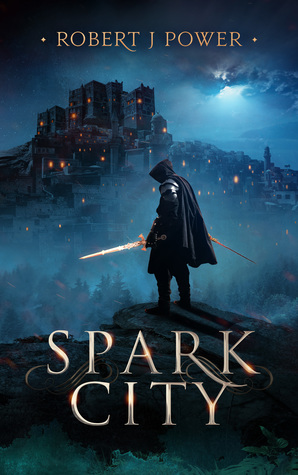 Title: Spark City
Author: Robert J. Power
Published: March 2018
Amount Read: DNF @ 40%
Rating: 2 out of 10
Blurb: Despite his warriors’ lineage, Erroh would rather waste his potential stumbling alone from one tavern to the next, drinking and gambling. Fate, however, has greater plans for him.

After decades of peace, a great war draws near, and though he doesn’t know it, he is standing in the way of the first wave. What is more, and very much to his dismay, he’s about to find out he’s not entirely alone either. But Erroh has a plan, a simple plan.

Thanks for stopping by to check out another review of one of the finalists for SPFBO 5! Let’s not waste too much time on semantics and introductions and get straight into the review. 🙂

Unfortunately, I truly did not enjoy Spark City. Please remember that everything is subjective, but especially when you’re reading, so while one person may not like something, another may love it! And if this book sounds like something you’d enjoy from the blurb or the cover, go ahead and give it a shot! I, however, stopped reading after 40%.

Though it was hard to determine exactly what this world was and how it worked, I thought the potential was there for it to be a really interesting story, with how the Cull works and following the traditionally fabled son of a strong bloodline who ends up being  a failure himself, especially as peace is about to be disrupted. But the execution lacked.

Unfortunately, I found the plot to be very unfocused. In the first 50 pages, we have a character, Erroh, who is gambling and doesn’t want to be in love, who then must leave to embark to Spark City to find a mate and spends some pages just thinking about life (which, could be okay, but at the very beginning, is hard to capture a reader’s interest), to stumbling across a massacre to fighting and killing brigands to being discovered by a woman who’s an Alpha who wants him to help train her son and then he admits he is the same, too, just of a different bloodline, all before he reaches Spark City.

It was very jarring and confusing and hard to stay focused and invested in the story. As I continued reading, it tried to weave some threads together, but with such a confusing beginning, it was a little too late.

Earlier on in the novel, we are presented with four of the possible Alphas for Erroh to choose from (or rather, to choose him as their mate). All of them came with this over-the-top description of how they were goddesses in human form, with beauty surpassing all that he’d ever imagined before, no flaw in any of them. It was a bit much for me and made these characters flat. And then having lines like, “He resisted the primal urge to reach out and touch her hair, caress her cheek and perhaps make a desperate grab for her chest” (107) didn’t win me over, either, and felt misogynistic in tone. I also didn’t like Erroh. At all. He complains about how he is treated and continually contradicts what he wants and how he feels with how he acts and I couldn’t root for him or connect with him at all.

These are just minor things, but there were quite a few times where there is nothing to denote that we are moving time up, e.g., from one day to the next, or transitioning from waking to a dream. No italics, no page breaks (or even paragraph breaks), which can be really jarring and confusing. I was also confused why the spelling of “fuck” was changed to take out the “c”, especially when everything else was spelled the same. It was just odd to me and always took me out of the story. Just say fuck if you want to use the word.

In sum, Spark City was not a book for me. I hate writing negative reviews, but I always have to be honest, and these are my honest opinions. I rate this book 1 gem out of five, 1 star on Goodreads and a 2 out of 10 for the purpose of SPFBO.