Last Updated on May 30, 2020 by ThoughtsStained

So, normally when I write book reviews, I usually dedicate an entire post as one review. Sometimes, I’ll do a combination of mini reviews, because it’s just easier for me to do that instead of writing full-length posts. In this case, I’m sorta doing a combination of the two, because I happened to decide to continue reading Sebastian de Castell’s Spellslinger series, picking up where I left off with starting book four, Soulbinder.

I kinda knew this would happen, but I ended up finishing the series, reading each of the three remaining books in this six-book series one right after another, because I couldn’t get enough.

So, I thought I’d give you all three reviews in one post! I don’t usually get to read series in such close succession all at once, so I don’t think I’ll get to do this all the time, but I quite enjoyed it and hope you don’t mind this different format.

**Also, spoilers may abound for the series through my reviews and the book descriptions. Read on at your own risk** 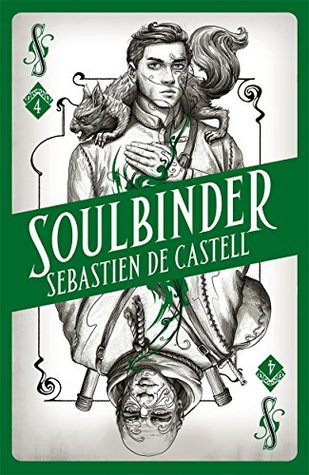 Kellen and his murderous squirrel cat, Reichis, are on their own. They’ve heard rumour of a mythical monastery, known as the Ebony Abbey. It’s a place that outsiders can never find – but Kellen is getting desperate. He’s been told that the monks inside the Ebony Abbey know more about the Shadowblack than anyone else – and that they even know how to cure it.Then Kellen and Reichis are separated and for the first time, Kellen must face the world alone – and venture deeper into shadow magic than he ever knew he could.

Oh wow, did I love this book so much. One, de Castell writes in such a way that it is just so easy to read. The voice is incredible and it was so easy to dive back into this world. Reichis is just a hoot and I love him. The fast pace of this novel made it incredible easy to read and increasingly difficult to put down. And I think it was a great novel because we’re truly seeing Kellen start to grow up and make decisions and choices that have some pretty intense side effects and consequences. I thought traveling to the Ebony Abbey was really interesting and I’m not sure what about this made it my favorite so far, but it certainly was–which surprised me, since it’s missing the character who I love the most. 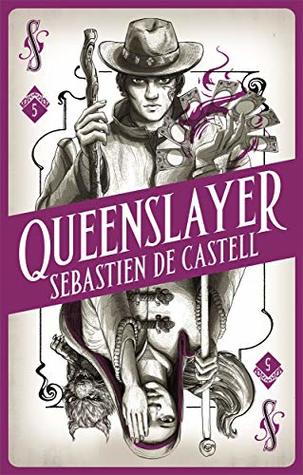 Kellen and Reichis have just finished fighting a duel in the desert when Kellen inadvertently smears blood on the Daroman flag – an act of treason for which the Marshals have no choice but to arrest him. Just before he’s put before the Queen to be executed, Kellen is given a strange piece of advice from one of his fellow prisoners: kill the Queen and he’ll be given clemency by those who take power. But when Kellen comes face-to-face with the eleven year-old monarch, he realises she’s vastly smarter than he expected – and in a great deal more danger.

The series continued to be amazing and exactly what I needed to read and I’m still enjoying it immensely. This one surprised me a bit, in terms of where the plot went, but we continue to see Kellen mature and forced into some pretty difficult situations, using his own natural charm and tricks to attempt to get out of them, which I really enjoyed. And, embracing a little bit more of being an Argosi? Yes, please, let’s accept that! In this one, I felt the absence of a certain character a lot more and Kellen’s family constantly asking him to return home truly pissed me off, if I’m being honest? I’m tired of them trying to manipulate him and I wish they’d just leave him alone and let him live his life, because they don’t deserve him. Like, sorry Shalla, but you chose your side. Now lie in it. 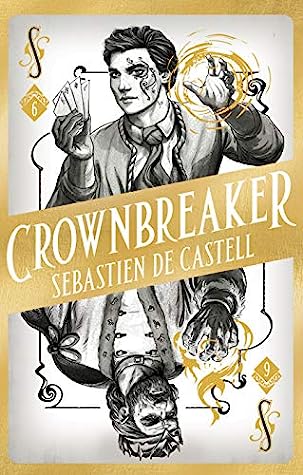 Kellen and Reichis are settling into their new lives as protectors of the young queen and dealing with the constantly shifting threats to her reign and to her life. For the first time in his life, Kellen feels as if he’s becoming the kind of man that his mentor Ferius had wanted him to be. Even Reichis has come to appreciate having a noble purpose – so long as no one minds him committing the occasional act of theft from the royal treasury.

But what seems to be a simple card game between Kellen and an old man is soon revealed to be a deadly game of wits in which a powerful mage has trapped the queen’s spellslinger in order to kill him.

This is just such an amazing conclusion to am amazing series. Pure spoiler here, so be careful: but seeing everyone who cared about Kellen come back together and support him as everything comes to a head. I won’t lie: I didn’t put together how some of the events in previous books came together to finally lead to this conclusion, but it also felt like the perfect ending. I almost cried, which hasn’t happened with a book in a while and I just thought it was really, really well done. I already miss this world and these characters, but damn do I love them. There is no doubt that de Castell has a lifelong reader on his hands, after reading this series.

Thank you so much for checking out these reviews! Have you read this series? What did you think? Let me know in the comments below and thanks again for checking it out.