Blurb: A would-be mage with no magic of his own has to defeat powerful enemies with only cunning and deception in the first book of an exciting new adventure fantasy series from Sebastien de Castell.

Kellen is moments away from facing his first duel and proving his worth as a spellcaster. There’s just one problem: his magic is fading.

Facing exile unless he can pass the mage trials, Kellen is willing to risk everything – even his own life – in search of a way to restore his magic. But when the enigmatic Ferius Parfax arrives in town, she challenges him to take a different path.

One of the elusive Argosi, Ferius is a traveller who lives by her wits and the cards she carries. Daring, unpredictable, and wielding magic Kellen has never seen before, she may be his only hope.

The first novel in a compelling six-book series, bursting with tricks, humor, and a whole new way to look at magic.

I thoroughly enjoyed this book.
I’m not sure exactly what it is about it that I liked so much, but it was just an easy read to sit down and read in large chunks. Kellen was such easy character to root for. I loved his occasionally sass and how his strength was in his mind and how he continued to grow (yet struggled to do so) as he began to learn about the harsh truths in the world around him. Yet we also still saw how, even though he’s about to turn 16, there are still aspects about him that are of a child, so that’s why learning these harsh truths and being forced to become a man, like Ferius likes to remind him, is so difficult for him (most notably for me, was how one of his…I hesitate to say main concerns, but something that he brought up multiple times was the fact that he hadn’t been kissed yet; just reminded me that, even though he was dealing with so much, he’s still just a kid and I liked that). So Kellen as a main character was definitely a strength. 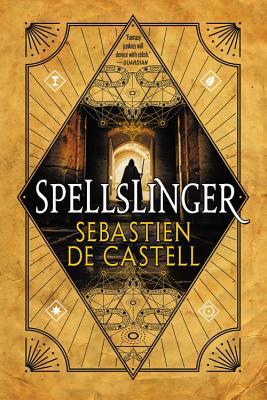 I think the world we were in was also really strong. The magic system itself was really neat and I’m really hopeful to learn more about in the subsequent books, but I think the political system surrounding that magic was even more interesting/complicated, especially as you read further in the book. There is a certain Sha’Tep’s story that I kinda wish we could have read, from their perspective, as a complement to this story. I can’t really say more than that, because, you know, spoilers, but still. If you read the story, I bet you can figure out who I’m talking about.
I definitely wish we knew more about Ferius. I loved her as a character, but I want to know more. I also wish I could figure out exactly what the squirrel cats look like. Like, I have an idea, but it’s not very clear.
The strongest aspect of this book for me was it’s voice. I thought de Castell captured the voice of a teenager/youth so perfectly, in Kellen’s first person narration. I couldn’t get over how well executed that was and it just added another level of realism for me.
All and all, this was a cracking reading. I really enjoyed it and, even though it definitely had it’s intense moments, sad reveals and really deep scenes that moved me, I thought it was just a…well, just a fun book to sit down and crank through in an afternoon or two. I just pleasantly enjoyed it and I’m excited to read the rest of the series!
Read on!