Without wasting a lot of time with an introduction, let’s get right to it!

Title: Children of Mytrea
Author: Alexander J. Vincent
Published: May 2019
Amount Read: 50 of 666 pages (13%)
Rating: 2 out of 5 gems
Blurb: Hesdemere. A quiet, forgotten island. Upon its soil grows Mytrea; a plant capable of miracles– and of monstrosities. A plant that could make Atanis the most powerful man in the known world.

Generations of fishermen, living and dying upon the beaches of his home. Centuries of oppression; their people conscripted, rejected, crushed under the boots of a foreign, uncaring city.

Now, Atanis –ruthless, ambitious– will break the cycle. The world is changing, modernizing, and it has acquired a hunger for narcotics. A demand for escape that Atanis intends to supply.

On the mainland, riddled with warring city-states, the balance of power is ever changing. Those seeking to elevate themselves above all others are consigned to a swift end; knives in the dark, lies, poison.

The city-states will do whatever they must, to rid themselves of the new threat upon their doorsteps.

And so marks the rise of the Hesdemere cartel.

This book seemed to have an interesting premise–though I think more of it is explored further past what I read–but ultimately, it was the writing style itself that I didn’t connect with. It was written without a lot of organic transitions, instead in shorter, choppier sections, with massive time jumps within the narrative between these sections. Personally, that’s just not really my style of telling the story. The pace was pretty fast, which could be a good thing, but in this case, I felt like it was jumping too quickly, not letting me become oriented and understanding what is happening in the scene before moving onto the next thing.  A lot of it also isn’t in-scene, instead telling us, “They are going to do X,” and then X happens, instead of letting us experience it WITH them. I also felt there were some moments (like the father questioning them going into the city and then allowing them to do it without question) where we ran away from tension, instead of letting it build and see what happens.

Character wise, I thought their father didn’t truly feel like a father figure? The way they talk and interact doesn’t feel like a typical relationship, which is totally fine—but I think I’d like some backstory as to why their father seems to be reluctant guardian over caring and invested father, so I could have understood these interactions a little bit better. Also, I don’t mind cursing, but there has to be more to one’s vocabulary than variants of the word, “fucker.” Especially when that is everyone’s vocabulary.

So, for me, while it set up an interesting world and premise, the writing just didn’t connect. I gave it two gems out of five because I believe, if the writing connects with you, i.e., if you like fast paced, choppier writing, you might enjoy giving this fantasy a try!

Title: Chasing Portals
Author: Jason Parker
Published: November 2018
Amount Read: 50 out of 619 pages (12%)
Rating: N/A
Blurb: An apocalyptic war destroyed the utopic Age of Magic in the land of Gandany. A scarred world remained, devoid of magical energies. In the aftermath, a renaissance of science and technology arose from the ruins. The world rebuilt and prospered. Now, many years later, new threats seek to decimate the world again.

Harmony is disrupted by the quest of a resurrected wizard intent on recapturing his former glory and dominance. Chaos is fueled by the narcissistic ambitions of a master scientist whose greatest invention may prove to be the ultimate instrument of destruction.

A brilliant young graduate of the science institute strives to create a legacy to benefit the world, but finds himself entangled in more than he anticipated. The veil between friends and enemies is clouded as everyone attempts to manipulate him to serve their own ulterior motives. Will he be Gandany’s savior or the agent of its demise?

Elements of fantasy, horror, science fiction, steampunk, and super heroics combine to determine the fate of a land teetering on the brink of darkness.

This, I believe, came down to the unfortunate case of a “simply not for me” as a reader. I thought the writing was fine, but the tone and the dialogue just didn’t pull me in, in a way I can’t exactly pen down–which, frankly, I realize it completely unhelpful, to readers trying to decide whether to give this book a try. Personally, I just felt like I wasn’t able to become grounded in this world before everything was thrown in upheaval and I just didn’t connect to the story or become lost in it. By the time I reached my promised 50 pages, I just wasn’t invested. And, since this is a contest and I’d already read portions of books that interested me, I knew it was time to cut it, even though I can’t really say exactly why the tone and writing didn’t capture me.

Because I believe this one is a classic case of “it’s just me,” I didn’t give this book a rating, as I don’t want to rate a book poorly when I can’t properly nail down why it wasn’t for me, only that I know it isn’t. As such, if the blurb above piques your interest, I recommend you give it a try! 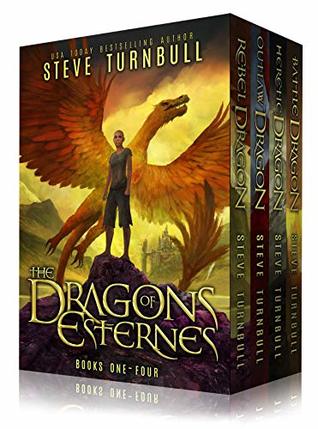 Title: The Dragons of Esternes
Author: Steven Turnbull
Published: April 2019
Amount Read: TBD
Rating: TBD
Blurb: What value is freedom when you can’t even ride a dragon? The Complete Story…

As mentioned before, a full review will come for this book later, as it’s piqued my interested enough to continue reading it. I will say I’ve had a couple hang ups with the writing, but I’m also curious about about the story that I couldn’t see myself cutting it just yet, as I wanted to keep reading? So I’ll definitely continue reading this book until I decide it’s not my finalist or finish it!

And there’s my next two cut and second book moving forward (not a semi-finalist yet, mind, but still in the running to become one). Check back on this space next Monday to see the fate of my next three books!