It’s been pouring nonstop today and my pants are just now drying from the ten minute walk from my car to my job after a few hours, so that’s exciting. Let’s get to the next results!

The sisters are tasked to save the people from their power-mad kings. Three separate missions to three separate kingdoms – sky, land, and sea.

Armed with their dragon-enchanted weapons, they take on the armies of men.

As the soldiers prepare for battle in a war that must not happen, the sisters have to stop it before it starts. From the heights of the kingdom in the clouds, to the raging seas and the turbulent land, the sisters find that their dragons are not as forthcoming as they’d like.

Some wars are fought in the battleground of the mind.

Join the sisters as they enter the world of mankind on a journey to save the people from themselves.

I’m actually really sad that I didn’t love this novel more, because it definitely intrigued me quite a bit. But it felt a little disorganized, disorienting and, after reading my promised 50 pages, I was just left a little disappointed.

In the first chapter, we are introduced to the trio of sisters, hinted at that there is a war going on and the lands are separated into Land, Sea and Sky; and there is some sort of land of man and…island of women, I guess? The grounding of the story wasn’t the strongest and the chapter too outside-looking-in, rather than in-scene, so it was hard for me to get lost in the story, as I was too busy trying to figure it all out. Too short, too.

Then, in chapter two, we learn they are meant to become queens, yet have no idea how this comes about, what organization or deity is determining this or how any of this works. In my notes, I ended up simply writing, “BACKSTORY,” because I really, really needed some grounding before their lives are completely upended.

Plus, I found it a little hard to believe that these sisters are meant to rule. How are they meant to rule when they aren’t even aware of the current political climate and their mentor has to inform them about it alongside their plan rise to queendom?

Beside that, I found the dialogue to be a bit weak and inconsistencies throughout. For example, the sisters needed to begin their journey immediately, yet their mentor disappears for two weeks and they still have to undergo training? That’s a lot of time to let pass if the world is in political turmoil and they are the apparent saviors.

All that said, the premise did sound really interesting and I do like the sisters-must-split-up part of the plot that’s revealed a little later on. It might seem obvious to others as they read, but to me, it was a nice, “Oh, shit” moment.

Personally, it just wasn’t executed well enough to capture me at the beginning to make me want to keep reading, which is why I rated it two out of five gems. But, if you’re into sibling stories about epic quests to save the kingdom, this might be your cup of tea!

Title: Free Dive
Author: Emma Shelford
Published: June 2019
Amount Read: 50 out of 357 pages (14%)
Rating: 1 out of 5 gems
Blurb: Marine biologist Corrie Duval saw something as a child, something she could never forget. To her colleagues at the university, she is a research scientist collecting ocean data. But Corrie’s experience as a young girl led her to a secret online life consumed with finding evidence of mythical sea creatures.

Together, they navigate dangerous waters, dodge ruthless fishermen, and dive into uncharted knowledge. They may find the answers they desire, but what other questions will emerge from the depths of the ocean?

Free Dive is a fast-paced, fantasy adventure on the deep blue sea.

Unfortunately, this book really just wasn’t for me. Usually, I’m a fan of urban fantasy. But the writing/tone just didn’t connect with me. The chapters were short and choppy, yet I didn’t feel like they were really…going anywhere? I got almost 15% into the novel and yet I still wasn’t exactly sure what the end game was? Pair that with a lot of information-given-through-dialogue instead of organically, the fact that page breaks were used instead of incorporating transitions and massive time jumps between paragraphs without any explanation, and…yeah. The writing really just wasn’t for me.

This is also just totally me personally, but I’m not the biggest fan of reading about teenager or college protagonists in modern day settings (teenagers in complete fantasy settings is a totally different story). Sometimes, if done well, I find myself enjoying it, but usually, it’s just not really my thing. So that already had me a little wary (but is totally just a me thing and those who enjoy that age range and contemporary setting might really enjoy this!), but then Corrie just felt…super ignorant? Which didn’t make sense, giving her character’s backstory as a research scientist. I just found her kinda annoying, honestly.

Though I thought the intermixing of sea legends of real life had some potential, for me, the characters, setting and writing fell flat, which is why I gave the one gem out of five rating. But, like all readers and opinions, everything is subjective, so if the blurb above piques your interest, I suggest you give it a read and decide for yourself! 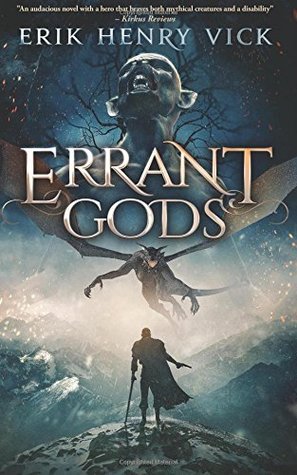 Hank Jensen is cursed with a broken body. Once he was New York’s most dedicated criminal profiler, but the demonic Bristol Butchers crushed his career and left him disabled and hopeless. As he struggles to make sense of his new life, the cannibalistic immortals have returned with a new target: Hank’s family…

Errant Gods is the first book in the epic Blood of the Isir genre-blending, dark fantasy series. If you like terrifying evil, mythical worlds, and a hero facing impossible odds, then you’ll love Erik Henry Vick’s imaginative saga.

As mentioned before, a full review will come for this book later, as it’s piqued my interested enough to continue reading it. I will say that this book teetered back and forth, in my trying to decide to cut it or not. I have a number of issues in what I’ve read so far, but I’m also quite curious what is going to happen next and really wanted to keep reading, just to see how things play out (for one character, in particular)? So that impressed me and why this has made to the next round, so far. So I’ll definitely continue reading this book until I decide it’s not my finalist or finish it!