Title: Sworn to the Night

Blurb: Marie Reinhart is an NYPD detective on the trail of a serial killer. When she sleeps, though, she dreams of other lives; she dreams of being a knight, in strange wars and strange worlds. On the other side of the city, Nessa Roth is a college professor trapped in a loveless marriage, an unwilling prop in a political dynasty. She’s also a fledgling witch, weaving poppets and tiny spells behind closed doors.

When Marie’s case draws her into Nessa’s path, sparks fly. What comes next is more than a furtive whirlwind affair; it’s the first pebbles of an avalanche. Nessa and Marie are the victims of a curse that has pursued them across countless lifetimes; a doom designed to trap them in a twisted living fairy tale, with their romance fated to end in misery and death.

They aren’t going out without a fight. As they race to uncover the truth, forces are in motion across the country. In Las Vegas, a professional thief is sent on a deadly heist. In a Detroit back alley, witches gather under the guidance of a mysterious woman in red. Just outside New York, an abandoned zoo becomes the hunting-ground for servants of a savage and alien king. The occult underground is taking sides and forming lines of battle. Time is running out, and Nessa and Marie have one chance to save themselves, break the curse, and demand justice.

This time, they’re writing their own ending.

Fuck me, this might be my favorite novel I’ve read for this contest so far.
I’ll try and do the review justice, but…wow.
100% transparency, I wasn’t expecting to enjoy this book. I did not like the cover and I hadn’t read the blurb about it when it was announced as the finalist, so I realize I’m totally doing the whole judging-a-book-off-it’s-cover thing, which I know you’re not supposed to do, but here we are. So, when it was finally up next on the schedule for me to read, I checked it out on Goodreads and started reading the blurb and I was pleasantly surprised.
“Huh, this actually sounds pretty interesting.”
Friends, I was NOT prepared.
I mean, this book sucked me in from page one and didn’t let go. I read the first 100 pages in one sitting, easily, and I was not expecting that. Like, I wanted to stop reading the book I was reading for fun so I could keep reading this one, which I was reading because I’m committed to do so as an SPFBO judge.
*stares at camera*
Yeah, I like really loved this book. 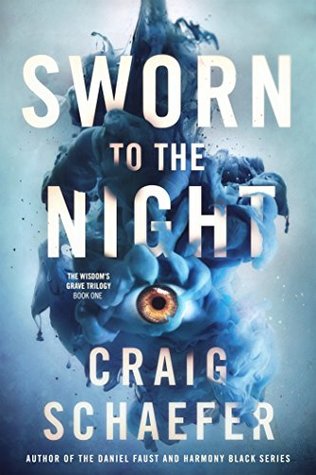 It reminded me a lot of Dennis Lehane. Prolly not for writing style or anything of that nature. It’s just that Lehane is the only thriller author I’ve ever really read. *shrugs* I don’t really read thrillers or mystery all that often, but this story is dripping in mystery and detail and intrigue. We don’t get into the wonderful (-ly dark and gruesome) fantasy elements until a little bit later in the novel, but this is no typical New York and these are no typical cases. I loved the blending between the fantastic and the real and thought Schaefer did that expertly, making his version of America feel totally possible (though I’m glad of glad it isn’t, to be honest).
I was also very excited for a F/F romance and thought that was handled so well. I’ve been in the mood to find some more quality lesbian romances (though I believe both Marie and Nessa might identity as bisexual), so I was curious about this romance. I really enjoyed it! The BDSM elements definitely surprised me (and made me a tad bit uncomfortable, but that’s totally on me and I thought it was written really well, for someone who isn’t in that community but is dating someone who is).
On that note, I do think Nessa’s evolution from submissive to dominate (in all aspect of her life, not simply in the bedroom) could have been fleshed out just a tiny bit more? Because that first scene with her and Marie in the bedroom really surprised me, because her being that dominate totally wasn’t what I expected from her character at all. So I guess I would have liked to have her internal thoughts or her struggles with wanting to become that and embrace that element of her personality, yet being unable to thanks to her marriage and other oppressive factors, be a little more prominent during her POVs, so when she was finally able to embrace it, it wasn’t such a shock.
Otherwise, I just…really loved everything about this story. I loved the multiple POVs and thought, even with interspersing the minor POVs we only see once, it was really well done. I also loved how the interludes were incorporated and thought that was flawless. I empathized with Marie a lot, had major soft spots for Tony and Marie’s roommate (who’s name I can’t remember for the life of me), and was positively freaked out by The Zoo elements. I mean, shit, no thank you. I was also impressed how we have multiple plot threads being woven and, nine times out of ten, I was able to keep track of them. I think I only lost track of what was going on those few handful of times due to the choppier nature I had to read this book, thanks to it only being accessible to the free ereader app I downloaded on my work computer, to read during dinner breaks (so, taking a break from reading it for three days and trying to slip back in was a bit of a challenge).
Sworn to the Night made me want to read more fantasy-thriller mixes, because it was just…so bloody well done. I am really excited to finish this series and see what happens next. At the time of writing this review, I’m not sure what The Alliterates thinks of this novel, but for me, it’s vying with Gods of Men for my top book of the contest.
Of course, we still have one remaining.
*disappears in a plume of smoke to read the final book*
Read on!