Blurb: When the Krakau came to Earth, they planned to invite humanity into a growing alliance of sentient species.
This would have worked out better for all involved if they hadn’t arrived after a mutated plague wiped out half the planet, turned the rest into shambling, near-unstoppable animals, and basically destroyed human civilization. You know—your standard apocalypse.
The Krakau’s first impulse was to turn their ships around and go home. After all, it’s hard to establish diplomatic relations with mindless savages who eat your diplomats.
Their second impulse was to try to fix us.
A century later, human beings might not be what they once were, but at least they’re no longer trying to eat everyone. Mostly.
Marion “Mops” Adamopoulos is surprisingly bright (for a human). As a Lieutenant on the Earth Mercenary Corps Ship Pufferfish, she’s in charge of the Shipboard Hygiene and Sanitation team. When a bioweapon attack by an alien race wipes out the Krakau command crew and reverts the rest of the humans to their feral state, only Mops and her team are left with their minds intact.
Escaping the attacking aliens—not to mention her shambling crewmates—is only the beginning. Sure, Mops and her assortment of space janitors and plumbers can clean the ship, but flying the damn thing is another matter. As they struggle to keep the Pufferfish functioning and find a cure for their crew, they stumble onto a conspiracy that could threaten the entire alliance.
A conspiracy born from the truth of what happened on Earth all those years ago…

Ah, what a lovely read this was.
It feels like I’ve been meaning to read Hines’ work for a while, now–this book, in particular. To be honest, I didn’t realize he had written so much else, because it was Terminal Alliance that always caught my eye at the bookstore (that cover, I can’t get enough of it) and it was only after I started following his blog I realized he had more books out there! Of course, life happens, so even though I kept thinking about this book, I never did pick it up. Then, when the sequel was announced and subsequently published, I was even more curious about it and knew I needed to read it soon, because janitors in space. I’m kinda hear for this?
Finally, I just couldn’t resist and bought myself a copy.
I am so, so glad I did. 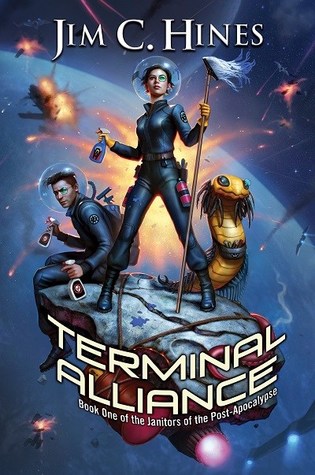 I started reading Terminal Alliance after I got really sick two weeks ago and normally, a book this good wouldn’t take me two weeks to read (honestly, more like two or three days). However, it’s hard to read when your sick and then catching up on everything after you finally get healthy again isn’t the best way to fit in reading time, either, so I’ve been slowly reading this book in bits and pieces, until I finally finished it this afternoon (and that last paragraph, friends *slow clap begins in the background*).
But don’t let that send the wrong message. This was a wonderful book.
I love books with a solid, ragtag crew who have to go against whatever odds the world throws at them and Terminal Alliance definitely delivered on that. Mops and her crew were fantastic (even if Wolf did annoy me at times) and I loved how they interacted against the most impossible of circumstances that continued to follow a pattern sorta like this: shitty situation arises, they respond and are like, “Yes, we did it!” Except, shit, it just got worse. Okay, let’s respond again and, “Hey, we made it!” Oops, except now it’s even worse and just…shit.
Repeat for almost 400 pages and I was HERE for this humor-filled ride of slowly-raising stakes and tension until all hell breaks loose and then some.
But not only did I fall in love with the team, but I fell in love with these worlds. The numerous cultures, planets and races were so unique and the human history was intense and a fresh spin on human evolution that I hadn’t read before! The humor was fantastic (and I loved how it was subtle it was at times, but how brilliantly it was presented; definitely a fan of how information was presented at the beginning of each chapter, as well!). The diversity was awesome and this was one of the first books that used “they/them” pronouns on the regular and that was very refreshing to read, too (even though I do still struggle and have to slow down a little bit, reading about characters using “they/them” pronouns ((simply because I’m trying to recondition my brain to stop alerting me that grammatically it is wrong, instead listening to my heart that, for that individual, that is part of their identity and that is right and they should be able to express that)), I loved being able to read about characters–and entire races–who identified in that way).
Overall, this was just a joy to read and I’m really stoked to read the sequel! It had some Curtis C. Chen and Joe Zieja vibes (and everyone knows how much I adore those authors’ works) and I’m always looking for quality sci-fi that mixes humor and heart well. I’m happy to add Jim C. Hines to that list.
Read on!

Previous Post: « How To Train Your Dragon: The Hidden World
Next Post: Symphony of the Wind: SPFBO Finalist »