This blog could also be titled, “The Life of the Luddite”. I’ve had a hard time choosing which one, because both incorporate themes and issues that tie together, regarding real conversations, technology and the growing struggle–or perhaps simply a struggle I’ve noticed–regarding communication. It’s something I’ve personally been struggling with for quite some time, yet because of my own ineptitude to communicate, have been unable to express what I’ve been dealing with to those it relates and matters to most.
I have to clear up a few things before I get to the root of what I’m dealing with. First off, as we all know, I’m a writer, a storyteller. So when you ask me how my day is, the answer usually isn’t going to be, “Oh, it was fine.” It’s going to be a fifteen minute tirade describing all the ups and downs of my day, including fine details, retelling of conversations I had and will probably be ten minutes too long, because you didn’t care to know all of those details.
I remember when I was in middle- and high-school, my Mom would ask that daring question: “How was your day?” Literally, it usually took about 45 minutes to an hour for me to answer it, as I had to describe not only my mood, but also what happened 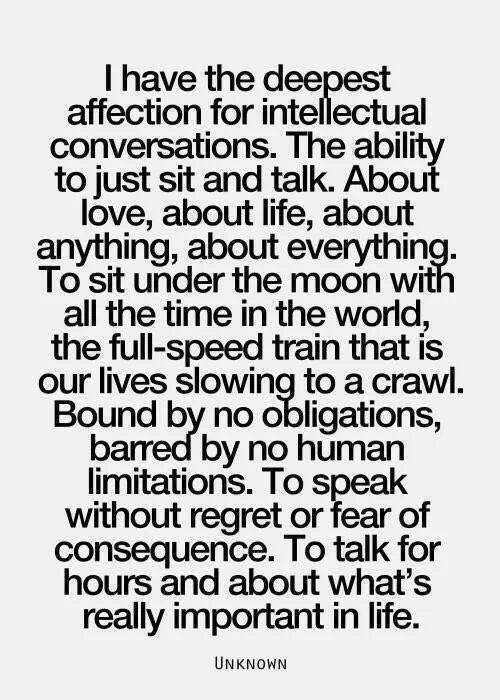 during each class, any drama that was going down, what assignments were due, how I barely survived the multiple miles ran during soccer practice, et cetera. I know, my Mom deserves an award for putting up with that every single day. While all of those details may not be important to the unfortunate listener having to listen to it, they were–and still are–important to me.
So I love to have in-depth conversations. Yet when it comes to confrontation or trying to express something that is bothering me, I can’t begin to even form words to describe what’s the matter. I close up, I shut people out and I avoid confrontation like it’s the plague and I haven’t been infected yet. Instead, I write my complaints, fears or stresses down. The amount of letters my parents or friends have gotten when I want to talk about something that is bothering me–whether it is a personal matter, something going on between us, something I am concerned about, whathaveyou–is ridiculous.
I’m not sure what causes this barrier. Perhaps it is because I am overly emotional and whenever I am stressed out, frustrated, nervous, overwhelmed, my instinct is to cry. I’m not ashamed of this, because I can’t control it. It’s just what happens. So by writing out my complaints or whatnot, I’m able to express myself and cry in the comfort of my own time and then usually, the correspondent is kind enough to write back in return, instead of having the conversation I don’t want to have, yet needs to happen. Oftentimes, a conversation still happens, but it always turns out better starting out through the letter or writing than if I approached them directly.
To sum up: I really like to have deep and meaningful and long conversations. However, I struggle to communicate regarding delicate topics or topics that will turn confrontational, so I write those out, instead. Kosher so far?

Next element: technology. I’m a self-proclaimed Luddite. A Luddite is someone who is against technology and the advancement of it. Of course, I’m a Luddite with an asterisks next to it. It’s not that I’m against the advancement of technology, completely. I just don’t want to it rule my entire life and be present in every aspect of my life. I love my laptop. I’m a huge gamer. I love having a phone that I can pull up a GPS and figure out where I am going, because I am directionly-challenged. I love that I can use websites like Facebook and Twitter to stay in contact with those I otherwise couldn’t or connect with other writers and authors that, otherwise, I would never met. So obviously I’m not on the “Destroy All of the Technology!” train (but that picture was too good to pass up). However, there are obvious choices that made my claim of being a Luddite stand out. I deleted all the social media apps on my phone so I wouldn’t be so attached. I can’t read ebooks and refuse to buy a Kindle. I just can’t do it. But the main reason, I have realized, is this:
Technology and media are exactly what I have to compete against for another human’s attention. And more often than not, I lose.
And finally, we reach the truth; the problem that I am dealing with yet don’t know how to deal with it. I crave communication. I want to have in-depth conversations with those I am close to, regarding little things that I turn into big things, like how my day–and also theirs–went, and the actual big things, like milestones and major events in our lives. And I want that on a regular basis. Daily, if I even dare.
But I’m finding myself, more often than not, going to bed irritated, frustrated and, quite frankly, feeling unheard. And a lot of it is because I am competing against the technology and the media that surrounds us all, and no matter how interesting a storyteller I am, I can’t compete, not against the distractions that prevail. But that’s not even the main problem. The main problem is I don’t know how to tell those who I feel are doing this to me that they are indeed doing this.
Smartphones are my biggest competitor. With so many apps available and with the stigma that you are expected to see and respond to everything–Facebook, Twitter, Instagram, SnapChat, emails, texts, calls, news articles, Pokémon Go–immediately, it’s hard to have a human interaction when your companion is always craning their neck down staring a palm-sized screen, thumb constantly scrolling. If it isn’t a smartphone, it’s definitely a television. They are always on. Whether it is just there for background noise or there is a movie or TV show playing, the television is always on. And I’m not saying in order to have a meaningful conversation, you have to sit with another person alone in a room with complete silence. That’s not it at all. It would just be nice to be able to have a chat with someone with feeling like I’m competing against a pretty metal box. Or nice to walk into a room or have dinner and not have the TV on, automatically discouraging me from attempting to have a conversation, in fear that the same pattern of me–or them, as I am not above distraction at all–not being heard will emerge. I know that I ask a lot in regards to conversation. I say that because traditionally, “normal” or everyday conversations aren’t long-winded and detailed and in-depth. Yet mine are. So I know it is a lot to ask, to ask those I’m close to, to be available and attentive and distraction free at some point, every day, so that I can have these conversations. But I’m also tired. I’m tired of feeling second to technology. I’m tired of having all of these conversation topics sitting inside my chest and never getting the opportunity to voice them. I’m tired of being in the middle of a story and watch as someone is messing around of their phone during it; or turns their head to look back at the TV, their attention divided; or, worse–and it has been happening more and more lately–slowly trailing off in my own story and my listener not even realizing that I had stopped talking and never realizing that I didn’t finish my story. Showing that they weren’t invested enough to listen to it. Even if it is just a too-lengthy story about what happened throughout my day.
I want to feel important and I want to feel heard.
Yet, here is the other caveat: I know the people who do this to me the most aren’t doing it maliciously or purposefully. Hell, they probably don’t even realize that they are doing it. And I know that, if I point it out to them, that they are going to feel guilty or ashamed and will do their best to change that behavior. And though I really don’t think this would happen, I have a small fear that my request–to have an opportunity or a time to catch-up on a daily basis without distractions–could be turned into a joke, with someone dramatically turning off the TV or pointedly making a show about their phone being turned away before we chatted.
I don’t want conversations to turn into big deals or cause problems with other people. I want them to be natural. And I don’t want to make people feel bad or guilty, which is the main reason why I haven’t brought this up to anyone. (Aside from my best friend, whom I have expressed all of this to. And she does a fantastic job of balancing technology and our conversations, often giving me the attention and conversation that I crave. Unfortunately, due to conflicting work schedules, I hardly get to see her, so our chances to converse like this have become rarer occurrences than they once were, which might also be a reason why these other stilted conversations are so jarring, because I literally have no other outlet).
So, this is me, writing about what I am going through. I posted it on the blog in hopes that readers may have advice about how I could approach this with my family and friends that I feel this happens to me with. Because of my fear of inflicting guilt or shame, I haven’t even gotten the courage to write letters to present my feelings, like I usually do. So I’m looking for advice, from anyone whom is willing to give it. Or feedback, if you think I am being too overly needy or demanding, because I also worry that I ask too much, in wanting consistent, longer, distraction-free conversations with people. I’m just not sure, at the moment.
Cheers.

Previous Post: « Warlock Holmes: A Study in Brimstone
Next Post: The Balancing Act Called Life (Or: I Still Have A Lot To Learn) »