Last Updated on March 13, 2018 by ThoughtsStained

Title: The Hollow Tree
Author: James Brogden
Publisher: Titan, March 2018
Blurb: Who Danced With Mary Before She Died?
After losing her hand in a tragic accident, Rachel is plagued by vivid nightmares of a hollow tree, and a hand reaching from it, begging her for help. Terrified that she is going mad, Rachel experiences phantom sensations of leaves, trees, and finally a hand that grasps hers and pulls a young woman into Rachel’s world. She has no idea of who she is, but Rachel can’t help but think of the local legend of Oak Mary, the corpse of a woman found hidden in a hollow tree, and who was never identified. Three myths have grown up around the body; was she a spy, a prostitute or a murdered gypsy? Rachel is desperate to learn the truth, but darker forces are at work. For a rule has been broken, and Mary is in a world where she doesn’t belong…

So, um, whoa.
First off, when I got the email asking if I’d be interested in this ARC (which, can I also say, is still one of the freaking coolest things EVER?!), I was a little bit hesitant.
Mostly because I’m a wimp.
It’s a horror novel. A horror thriller. I’m the type of person who watches horror films, if people force me (or if he is really attractive, as I used to claim), between fingers while trying to drown out the sounds. Who, friends have learned, has to hide behind their shoulder when unexpected horror trailers come on at the theatres. Avoids films and video games in this genre like the plague. Will read King (because, duh) but otherwise?
Yeah, no, I like my sleep, thank you very much.
Yet for some reason, when I was asked if I was interested in The Hollow Tree by James Brodgen, I responded with, “Sure, why the devil not?”
(Except, you know, much more professionally.)
I got the book on a…Monday, I believe. Started reading it the following Tuesday and read the first 250 pages. Continued reading it Wednesday night and finished it in two days. 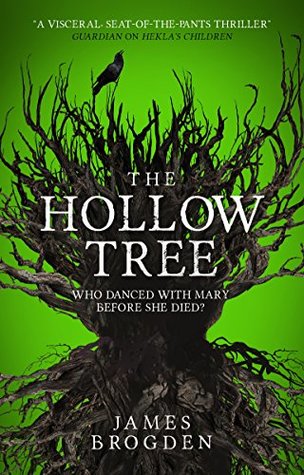 So did I enjoy the book?
Yeah, absolutely.
Did I have nightmares on Tuesday night about a woman with multiple identities asking me to help her figure out who she was as she also tried to kill me as she kept reaching out with her hand, thus waking me up and forcing me to turn on the Skyrim Atmospheres track so I could get back to sleep?
Also valid.
(I wasn’t lying when I made the claim above.)
And yet, I seriously enjoyed this book. It was a good change of pace than my typical fantasy and science fiction, yet it had more fantasy-esque elements than I was expecting. I expected more “jump scare” type scenes when I got more intrigue, instead, with a little more magic and a helluva lot more creativity (not that horror writers aren’t creative; just, the level of creativity within the plot here, I was just pleasantly surprised with, which I guess isn’t saying too much, considering I knew nothing about this book or author before I received said email?).
I really loved our main protagonist, Rachel. I especially loved her relationship with Tom. I’m a sucker when it comes to relationships and I’m always rooting for them and theirs was one that I kept assuming I knew how it was going to go down, yet I was constantly surprised by it (which I think speaks volumes to how Tom was written as a character). I thought the entire thing was well written, terribly clever and definitely had me wanting to continue reading it, to find out what happened next (I mean, I did finish the thing in two days). So I’m really glad I stumbled upon it and took a chance on it, even if I woke up panicked from nightmares because of it. 😉
Read on!