Blurb: Isa McQuiston is caught between two worlds. Strange creatures are attacking her people, their injuries beyond her medical expertise. More than one fisherman has been tossed ashore by the waves, drained of blood, a severed tentacle piercing his flesh. To find answers, she must forge a cautious alliance with the outsider making inquiries… even if he does present an almost irresistible temptation.

Dr. Alec McCullough, an injured naval officer, is restless and bored. Until his brother—an agent for the Crown—offers him an assignment: investigate a recent rash of unexplained octopus attacks. On the wet and windy Hebridean Isles, his every effort is met with resistance. Coaxing an attractive young widow—the local healer—to allow him to examine the latest victim only leads to further complications.

A fusion of living and mechanical components, the creatures follow instinct, but also command. Together, they uncover layers of deceit, revealing traitorous tentacles that entangle both their lives. As those behind their creation callously sacrifice innocent lives in pursuit of their goals, Isa and Alec struggle to forge a future together while attempting to prevent a disaster of international proportions.

We all know I’m absolutely on the bandwagon for Renwick’s steampunk novels, yes? Because now that I’ve completed The Iron Fin, it’s safe to say I’m a massive fan and all I want is for her to write more steampunk romance books (and I wish, more than anything, that she could release a print version of her ebook novellas, because I can only imagine how wonderful they are, but since I don’t do ebooks, I’ll never get the chance to read them *sighs forever*). 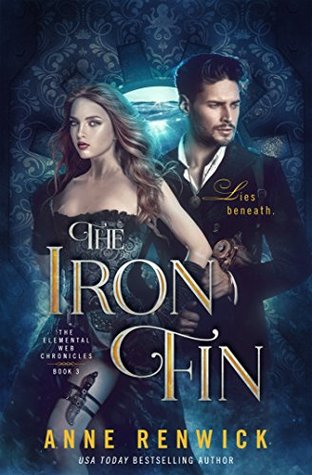 The Iron Fin was very different from the previous two books in the series with its focus of the ocean and the Fin, a new race of people who are tied to the ocean and have some special abilities in the water because of it. I thought this was a really wonderful change of pace for the series and couldn’t get enough of it. I’d love to read an entire book on this culture again, because I was just so fascinated by it. I thought the mystery this time around was really, really good and the chemistry, as usual, was top-notch.

I’m not sure what I can say here that I haven’t already said about her previous two works I’ve read (hence the slightly shorter review, which I do apologize for!), aside from the fact that I’m now a huge fan and I will definitely be keeping my eyes peeled for whenever she announces her next publication date. These are books I hope to own, one day–though shout-out to my public library for approving these purchases so I could read them after stumbling upon them on another blogger’s wrap-up post. I think the science is wonderful, the plots are always engaging, the romances enticing and chill-inducing, and the women are always filled with agency and have a greater purpose than society tries to diminish them to.

All in all, I just really love these books, but I think The Iron Fin might just be a favorite, so far.

Previous Post: « Top Ten Tuesday: What, I’m Not Avoiding Reading These Books, Why Do You Ask?
Next Post: The Lady’s Guide to Celestial Mechanics »