Last Updated on December 12, 2017 by ThoughtsStained

So, this was an interesting read.
I read the first of the series and I absolutely f-ing loved that thing. This sequel was one of the books anxiously awaited, eager to see what happened next. So when it finally released, I went to my bomb public library and picked up a copy, excited to return to such a riveting world of religious struggle and war.
Apparently, I should have reread The Pagan Night before continuing the series with The Iron Hound.
You see, my main issue with the book, was that I couldn’t remember everything that happened and all the main players from book one, so for the first half of the book, I was a tad bit confused on what exactly was going on (I know, for someone who read The Pagan Night over a year ago and was so excited to read this book because I was so awed by how that one ended, my memory is apparently shite). I figured it out and caught on eventually, but my own memory really screwed me over. I don’t think it was any fault on the author’s part or results in any negative criticism on the book itself. I’m actually more pissed at myself, because my inability to remember what happened did taint my reading of its sequel. 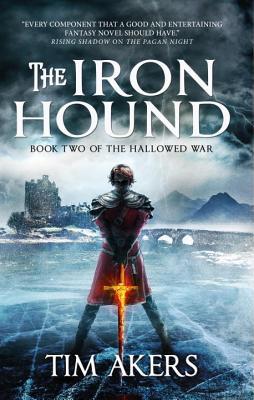 Yet, even with that, this book was good. Pretty dang good. Especially the last 200 pages or so.
I particularly enjoyed the sections covering the Blakeley’s–both Malcolm Blakeley and the juxtaposing struggles between his faith and the love he has for his wife; and Ian Blakeley and his hunt with Sir Elsa for Gwendolyn Adair. I also really enjoyed Gwen’s journey.
That girl has seen some shit.
But my favorite aspect of this book–probably of Tim Akers as an author, actually–is the quality of the writing. Because damn. There were so many times, whilst I was reading, that I thought, “Holy shit, this is so well written,” or went back to reread a passage because it was just that awesome. Akers definitely has a knack for writing descriptive, gorgeous, interesting fantasy prose–especially the dialogue.
I’m excited for the third book of the trilogy, The Winter Vow, to come out, next…August, I believe? I’m probably going to need to read a synopsis or something of The Iron Hound beforehand, so I don’t let my own inability to remember anything taint my reading of the conclusion of this series. Until then, I have a lot of other books to read–including the rest of Tim Akers work.
Read on!