Last Updated on June 10, 2020 by ThoughtsStained

So, you may have noticed or read my post where I spoke about my editing process for my novels and how I hinted at I’ve (yet again) adapted and evolved it, but didn’t want to get too in-depth with that post, so I was saving it for another post.

You see, I have been working on BLOOD PRICE and I’m on round number six of edits with this book. The first round was writing it as the first draft. The second round, I edited it myself, rereading it once, going through to add in threads and subplots and various corrections I’d made as notes during writing draft one. The third round, I edited again, after letting the draft sit for a while, making more changes similar to the second round. The fourth was after beta feedback. The fifth was after the second round of beta feedback.

This sixth is after professional editor feedback. The first time I’ve ever received this kind of feedback and, having only edited two chapters in, I am so thankful for Jeni and her guidance and advice (please, if you’re looking for a SFF editor, check out Jeni’s services and see if you think you’d be a good match).

You see, when I went to query BLOOD PRICE after round five, I was pretty confident in this novel. I know for a fact it’s the best thing I’ve ever written and, while it didn’t get the bites of agents like I hoped it would, I did get feedback from my top agent I’m hoping to sign with, who let me know that the worldbuilding wasn’t there. It wasn’t as immersive as she wanted it to be.

I’ll admit, I wasn’t 100% sure exactly what to do with that, hence why I wanted a professional’s eyes.

It came down to a couple of things, in a nutshell:

The writing is very solid (yay!) but I do way too much info-dumping through the way of introspection and exposition, especially in the beginning. Solution: Figure out which information your reader needs to know (then, just tell it) and which you want them to connect with (then, show it, via action, conversation and emotional and physical, visceral reactions.)

For me, it meant purchasing two books: Scenes and Sequels by Klaassen and The Emotional Thesaurus by Ackerman and Puglisi. The first novel is to help me learn to identify what a scene actually is and then what a sequel is within a novel–or, the reaction a character has to the scene before, and how to write those in tangent with one another. The latter is the godsend, listing different emotions and the physical, visceral reactions attached to them and used to describe them, so poor Natanni can stop just frowning or nodding her head.

I won’t lie, I still need to fully read Scenes and Sequels and I’ll be referring The Emotional Thesarus for the rest of my writing career. But, realizing that I’m doing too much telling within my novel and that I will have more of an impact by providing information through action has allowed me to see areas where I can be more descriptive (which I love to do, but it got lost in all the editing, honestly), allowing me to sprinkle in worldbuilding throughout with the sensory details, while the action allows my characters to have more agency and make the scenes more interesting, all while making me as a writer show more and tell less.

What does all this look like when you’re actually editing? 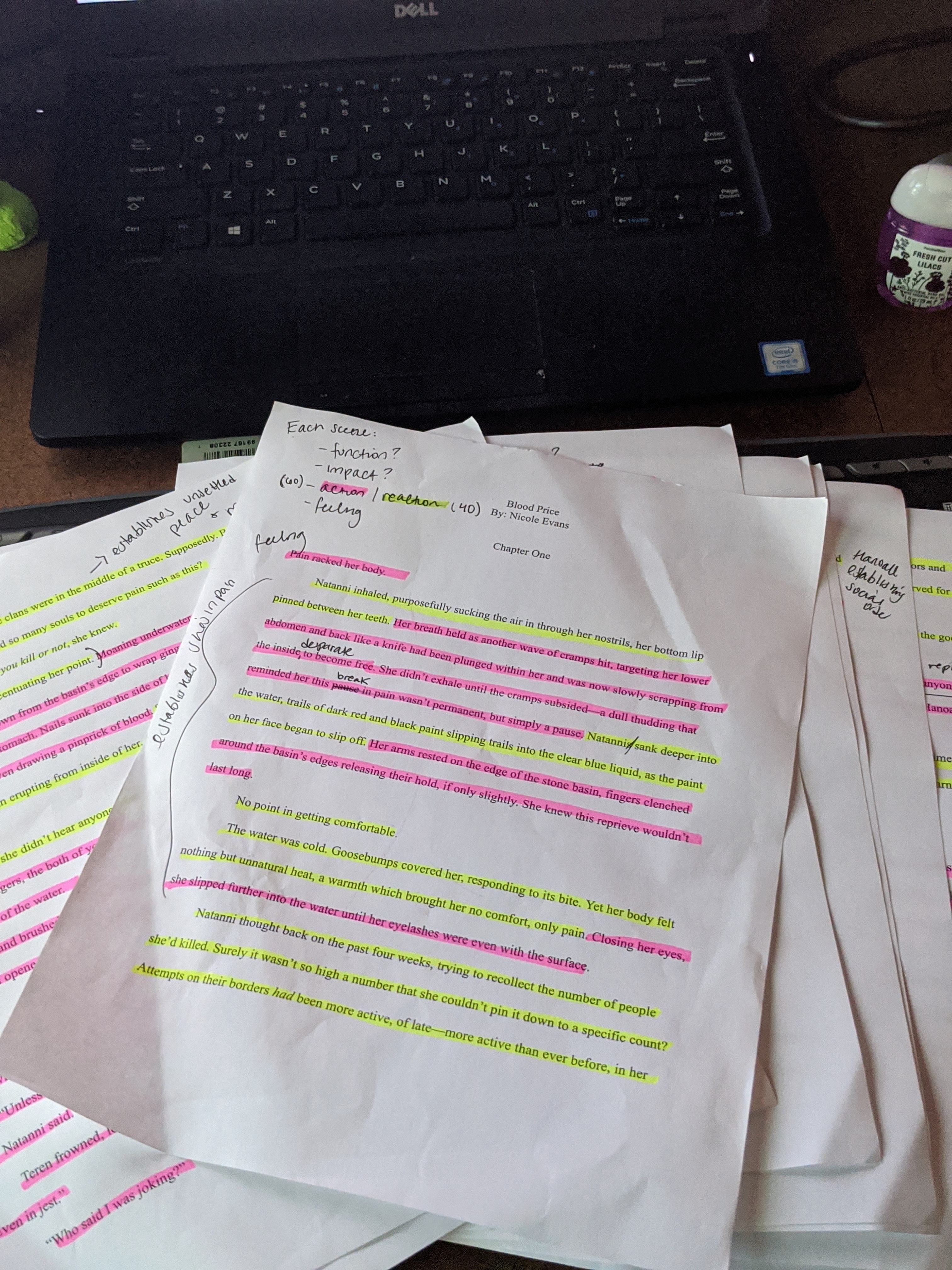 It’s a slower approach than what I’m used to, but it’s also a very purposeful approach. I already feel like my opening 40 pages are doing so much more. Natanni has more agency, I definitely see more of the world and I’ve been able to add in a few new scenes that I think create a lot more impact. I’ve also cut back in telling, a lot, teaching myself to trust my readers in the information I give them, knowing I don’t need to spell out everything.

It’s been super rewarding, but it can also be super taxing. Saturday, I wrote almost 3,000 new words in a single day. I haven’t done that in ages. I also am starting these heavy rewrites while working on two client manuscripts, during the busiest season of my day job while we’re trying it online remotely for the first time and during a global pandemic while trying to practice being a better ally for the black community.

Yeah, I need to be a little more cognizant of my mental health, these days.

So, I’m not sure if I’ll finish these edits by the end of June, like I hoped, where I’ll send them back to Jeni for a final readthrough and then go back for more edits with round seven, before I send my revise and resubmit. It’s a lot of work. But for the first time, I feel like I am truly diving into the core and craft of my novel, methodically picking it apart to make sure the craft level is as strong as the narrative and storytelling level. Honestly?