Last Updated on October 15, 2019 by ThoughtsStained

Title: The Mech Who Loved Me

Blurb: Ava McLaren is tired of being both a virgin, and a mere laboratory assistant for the Company of Rogues. When a baffling mystery rears its head, it presents her with the opportunity to work a real case… and perhaps get a taste of the passion that eludes her.

Blue bloods are dying from a mysterious disease, which should be impossible. Ava suspects there’s more to the case than meets the eye and wants a chance to prove herself. There’s just one catch—she’s ordered to partner with the sexy mech, Kincaid, who’s a constant thorn in her side. Kincaid thinks the only good blue blood is a dead one. He’s also the very last man she would ever give her heart to… which makes him the perfect candidate for an affair.

The only rule? It ends when the case does.

But when an attempt on her life proves that Ava might be onto something, the only one who can protect her is Kincaid. Suddenly the greatest risk is not to their hearts, but whether they can survive a diabolical plot that threatens to destroy every blue blood in London—including Ava

So, after rediscovering just how much I loved McMaster’s work (and losing sleep for two nights in a row devouring Mission: Improper), I immediately delved straight into The Mech Who Loved Me, quite excited to read about Ava and Kincaid, especially after that scene from book one.

Cue two more nights of staying up way too late and getting way too little sleep, because FRIENDS.

This might be my favorite McMaster book to date.

And, on my count, I believe this is my…seventh book I’ve read of hers?!

I mean, that’s high praise, right there, because all of her books have been five-star reads for me. 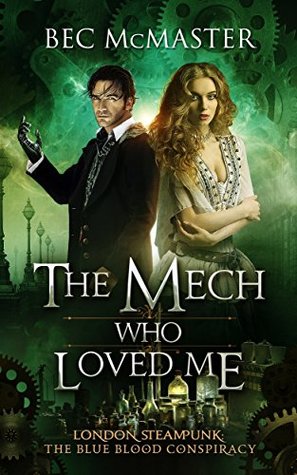 Of course, I’m a little behind on reviews, so it’s been a few weeks since I’ve finished this one, so my review isn’t as in-depth as I would like it to be. But, I have to repeat a claim I’ve said before: Bec McMaster is a master of her craft. I loved uncovering the intricate threads of the mystery and watching Ava come into her own. I loved watching Kincaid support her and seeing both of them learn about their own prejudices and forced to conquer them, on top of their growing love for one another. I loved the group dynamic and learning more about some side characters along the way. I loved the way Kincaid wooed her and seeing hints of some BDSM style romance? I have to admit, I was surprised how much I enjoyed that aspect, as well!

Honestly, this was a story that was just impossible to put down, yet I also was so mad I read it was quickly, because then it was over and I was quite bummed, before I immediately went and requested my library purchase the last three books in this series–and shout out to my public library for being awesome and kind enough to approve them. <3

(Did I just use all of my requests for October on the rest of this series? You bet I did. Do I regret it? Not one bit.)

It was just such a wonderful book, with characters to root for, a romance to swoon over and a mystery that continued to build upon itself, making me oh so excited for the next books in the series. Not to mention the couples who are left to be featured in the next three installments! If I thought the first two books were intense, these next three promise to amp it up to the point where, if I’m smart, I’ll be reading these books during the day.

But we both know a little less sleep is definitely in my future.