Last Updated on January 4, 2018 by ThoughtsStained

When you have the opportunity to go on a trip to Disney World the week before Christmas and you find out three days before the flight leaves and have an hour to make your decision, you may panic a bit.
But you’d better say yes, because otherwise, you’re missing out on the most magical of adventures.
I never in my life thought I’d actually get to go to Disney World, let alone have such an incredible opportunity to go during such a wonderful time of the year. But that exact scenario happened to me this past holiday season, when my boyfriend’s family, who were heading out on a family vacation, suddenly had an open spot they needed filled.
I was floored–and honored and humbled and elated–that they wanted me to join them.
I could write a novel about all the adventures that took place (and looking at the length of this post, I nearly have), but I’ll just try (read, fail) and stick with some of the highlights.
I Have A Bug Bite?
One of the most surreal things was stepping off that airplane and immediately taking off my jacket, wearing a tank top and yet still be sweating, in December. I know I was at the most magical place on Earth, so this is a silly thing to highlight, but this little fact floored me the entire week; how back home, it was below freezing, yet I was out and about, wearing tank tops, sweating, wishing I’d brought some capris instead of only jeans, during Christmas time. It was almost foreign, seeing these gigantic Christmas trees everywhere and all these lovely decorations, yet still being able to feel my fingers. 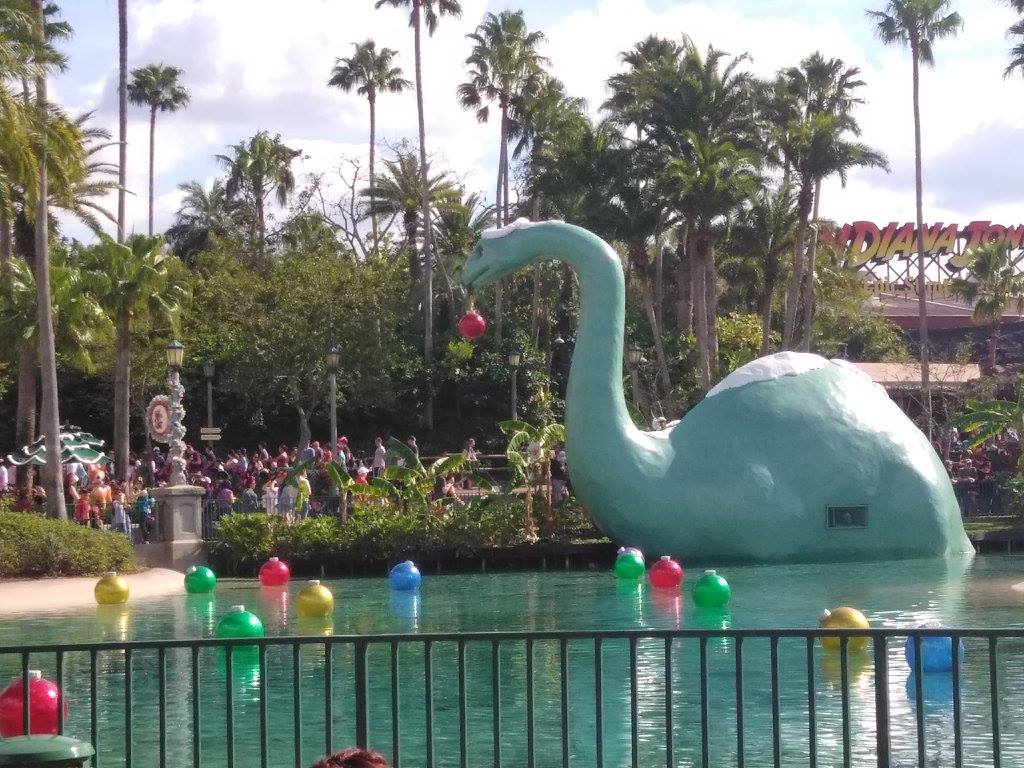 Oh, and I did come home with three total bug bites.
In December.
What.
Extra, Extra, Read All About It!
So, I’d been to Epcot once before, during a work trip, but I counted this trip as my first time at Disney. Edward loved pointing out how “extra” the staff was, from silly puns to describing buying an animatronic dragon as having an “adoption fee,” rather than a price tag. Not in a bad way, by any means, but he loved to point out how much everyone tried.
Yet I don’t think anyone was as extra as me.
I was your ultra tourist. I can’t tell you how many times I rushed to go and take a picture (or how I made us stop at every photo person to take another cheesy photo) or jumped up and down in excitement or my grin was a little too wide. I was ridiculous when we first saw the castle, lit up with Christmas lights during the night sky. Or how I was constantly squeeing the entire time we were in Animal Kingdom, my favorite place. I was always buzzing, asking Edward questions or asking if we could do X thing or stopping to look at Y shop. I was awed the entire time and it was just so incredible.
I’m not even ashamed.
I Would Walk 500 Miles…
We definitely got the full Disney experience, too. From the 90 minute wait times for rides to the 22 hour day we pulled on day one, walking 25,000 steps and a little over 11 miles (and averaging 9 miles throughout the trip); to hitting up every park and staying out from open to close almost every day. If we didn’t get thighs of steel from that trip, then I dunno what to tell you. Yet for every blister, every moment when we felt like we were going to collapse from exhaustion, every time we’d tell ourselves, “We’ll take it easier tomorrow,” only to add another mile; it was all worth it, because we couldn’t stop laughing, smiling and enjoying everything Disney had to offer. 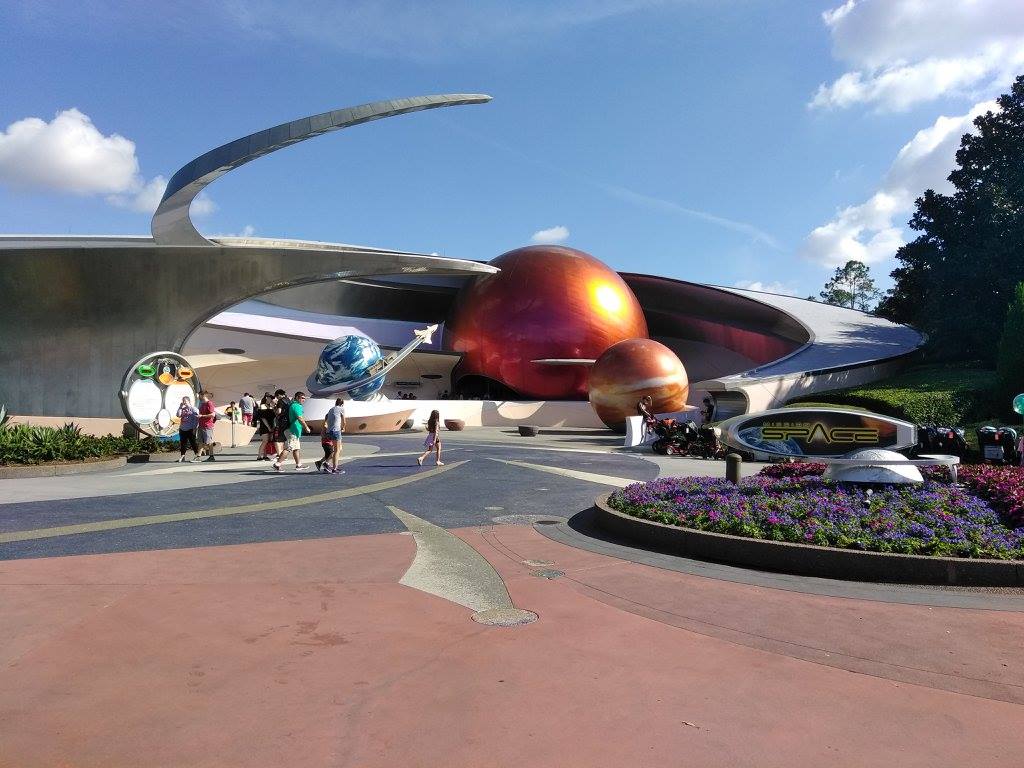 But we didn’t just walk.
One day, we were waiting for a bus to get to Epcot, but it was going to be a hot second. And buses to the Magical Kingdom were showing up left and right. So we thought we’d hop on a bus, go to the Magic Kingdom, and then jump on the monorail to get to Epcot. We ended up, somehow, also including a ferry ride (since we showed up on the wrong side of Magic Kingdom for the Epcot monorail), so we literally hit up every form of transportation possible, just trying to reach Epcot. Waiting for the bus definitely would have been quicker, but it wouldn’t nearly have been as much fun.
So-fari, So Good
Like I said, my favorite place was Animal Kingdom. We actually did get to go on a safari, which was probably really annoying for Edward, as I clung to his arm and pointed out every animal we saw right after our tour guide did, as giddy as a child (as if he couldn’t see them himself). Seeing the Tree of Life was incredible. Walking through Pandora was really amazing, too. Even though we didn’t get to ride one of the rides there, we did get to do the Naav’i river ride (twice) which was way too freakin’ cool. And we saw the two little tiger cubs and I may have made us watch them play with their mom a little longer than anyone really should have. I also had a weird fascination with all the ducks around (and saw ducklings!!), because I’m that much of an animal nut. 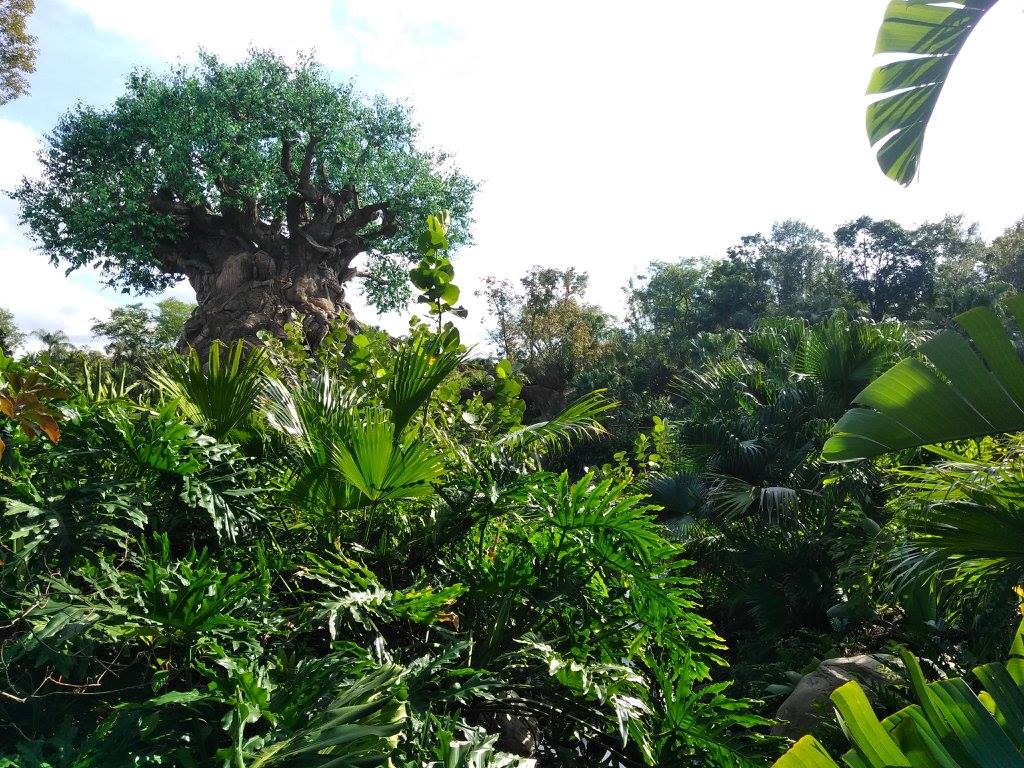 What’s a Fast Pass?
When I think of Disney, I think of the iconic landmarks, like the castle. I don’t think about the fact that it has a ton of rides. And roller coasters. Which I, uh, don’t do, because they freak me the frack out (which Edward learned really fast when I actually started crying slightly at Hollywood Studios because I was so terrified to go on Rocking Roller Coaster, where you went upside down, three times; he didn’t make me get on it, the gem). Yet I did try a couple, because Edward has a great knack (and I’m being 100% serious here) of knowing exactly when and how much to push me out of my comfort zone.
So we rode Everest (I only squeezed my eyes shut once!), which I enjoyed, but was definitely shaky, afterwards. We did the Naav’i river ride, the water ride (which was way too much freakin’ fun); Soaring, Test Track (and my car didn’t fail as horribly as I thought it would) and Mission Space, all twice and all incredible. We went through the globe at Epcot, the Dinosaur experience, Pirates of the Caribbean and even did a few rides at Universal, too! Though I was nervous, it was really fun and I’m glad I pushed my boundaries a little bit.
You’re a Blizzard, Harry 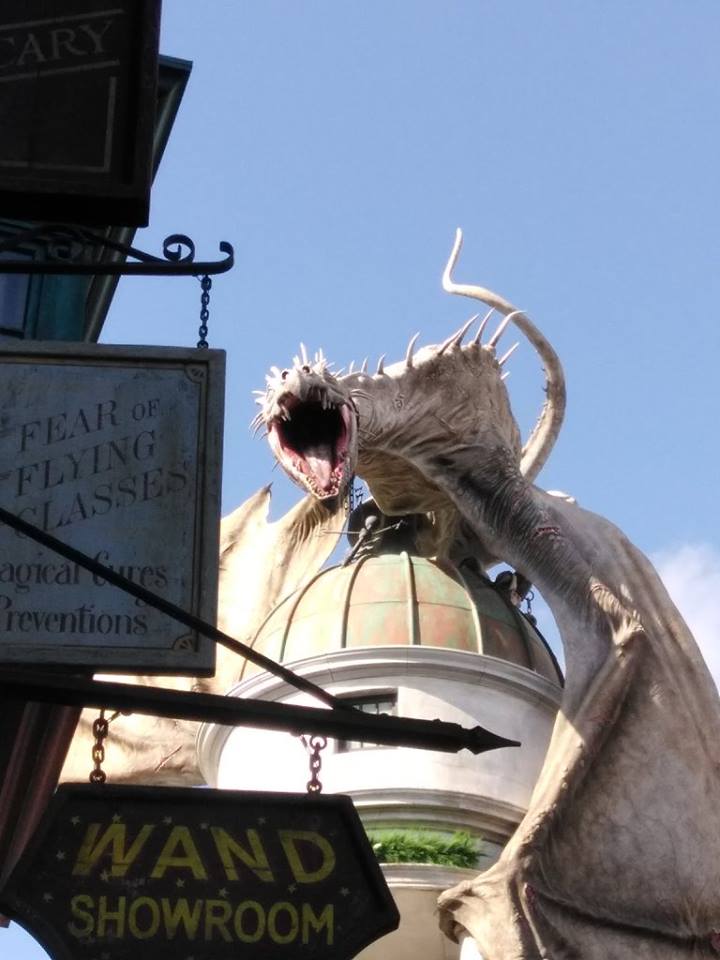 We did get to do two days at Universal, which basically, for us, equated to an afternoon at Jurassic Park and then the rest of the time spent drinking Butterbeer and wishing we were wizards (at least, I was). I don’t think I can accurately describe how incredible the Wizarding World of Harry Potter was. When we stepped around the corner and into Diagon Alley, I was literally so excited, I may have punched Edward, accidentally, in a not so pleasant area, to which we then had to pause for five minutes so he could recover.
Oops.
But, it was so incredible, the attention to detail, the soundtrack playing everywhere, eating at the Leaky Cauldron, all the people wearing their house robes. It made me wish the wizarding world was all the more real, more than I’d ever had before.
It’s Not the Trip, It’s the Company
As you can see, the trip itself was pretty amazing–and that’s just a mere glimpse, not including so many other highlights, like literally taking all modes of transportation to the Magic Kingdom just to get a footlong chili cheese dog, wishing we got a free puppy when we stayed a 101 Dalmatians-themed hotel room, the fireworks show, eating at a space-themed restaurant and getting prime seating, or doing a focus group while we waited our ride time. There are just so many amazing aspects of this trip that I can’t even describe them all.
But the best part?
The people.
Dating an extrovert led me to meeting a lot of really amazing people that my shy self normally wouldn’t have talked to: a dad and his daughter, who was scared to ride Mission Space with us, yet halfway through the ride, screamed “THIS IS AMAZING,” which had us all cracking up. A boy who rode with us on Test Track, doing drive number eight in a row. Parents and their son who talked with us while we waited the first time for Test Track, gushing about how much they love Disney and reminiscing about what the park used to be, way back when. A single dad and his daughter who’d just arrived the day before, yet were already killing it at the parks, same as we did, never taking a moment to rest, because there’s just too much to do. It was so neat, to meet so many different people, even for a short while.
Then, there were the family dinners we had (almost) every night, which I enjoyed tremendously. It was great to get to know his family better, hear about their own experiences from what they did that day and just trade stories while getting really freakin’ fat on good food (gosh, don’t even get me started on some of the food we had while we were there….). 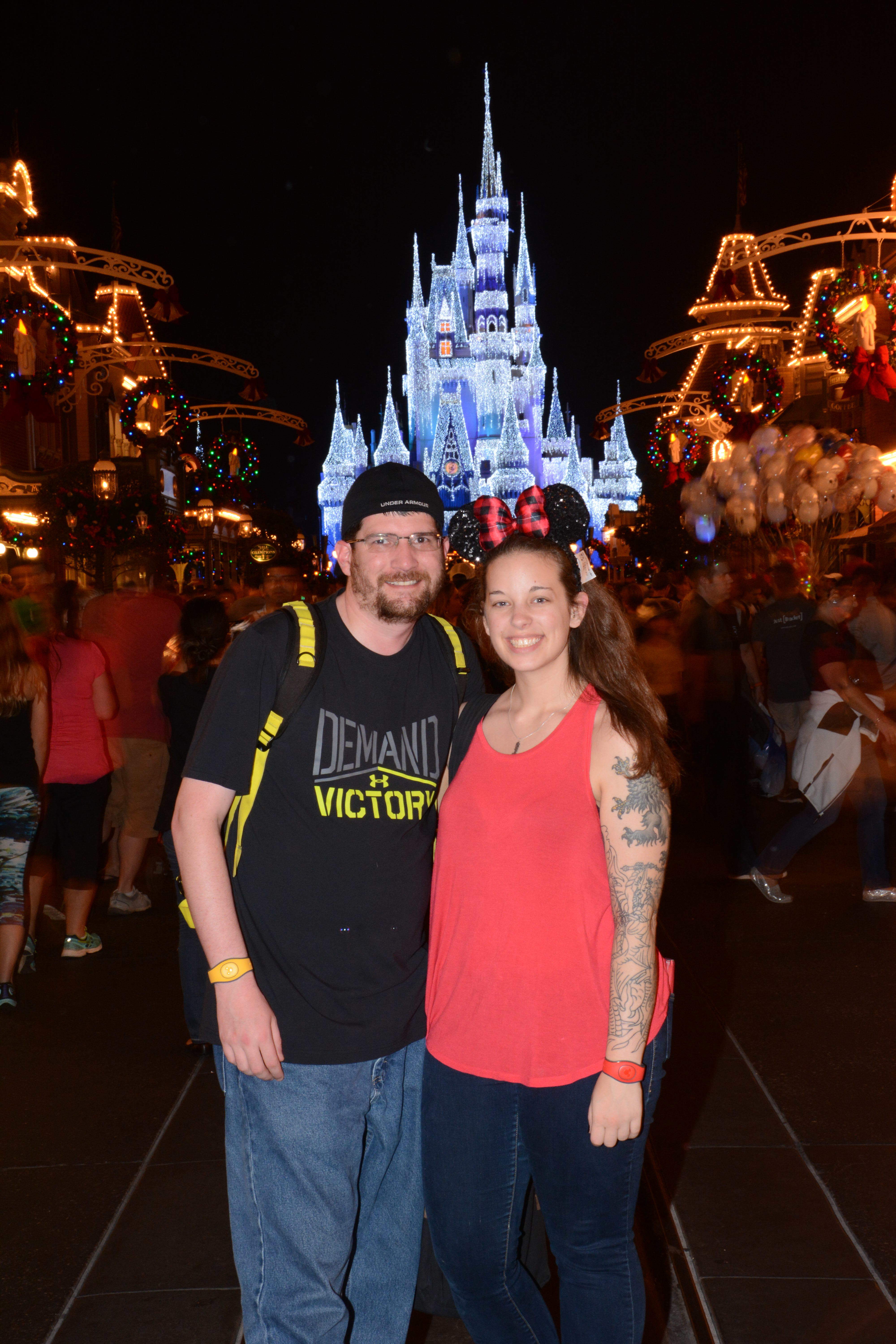 But, the best company was the man who traveled right alongside me.
That was absolutely my favorite part, hands down. We could have sat in the hotel room and just binged watched the Weather Channel while eating mozzarella sticks and french fries (which may or may not have happened one evening) and I still would’ve had such a wonderful time, because I was with a person who understands me so well and just makes me so incredibly happy.
Thanks, babe, for putting up with my touristy nature, only making fun of me a little bit when I grinned too hard any time one of the photographers asked us to kiss in a photo, pushing me out of my comfort zone and creating memories with me that will last a lifetime. I couldn’t ask for a better person to go on adventures with.
I’m absolutely ecstatic for all our future adventures to come.
Cheers.