Last Updated on September 14, 2018 by ThoughtsStained

Blurb: Humanity has spread across the depths of space but is connected by AfterLife—a vote made by every member of humanity on the worth of a life. Bale, a disillusioned policeman on the planet Bleak, is brutally attacked, leading writer Raisa on to a story spanning centuries of corruption. On Gehenna, the last religious planet, a hyperintelligent boy, Alef, meets psychopath Pellonhorc, and so begins a rivalry and friendship to last an epoch.

**Thanks to Titan for the ARC, given in exchange for an honest review**

The Rig by Roger Levy was one of the first books I ever received as an ARC. I hadn’t heard of it before Titan was kind enough to ask if I’d like to review a copy, but it definitely intrigued me. The cover especially, with it’s gorgeous colors and I’d argue almost minimalist design. Then, of course, life got in the way and weeks turned into months with this book sitting on my shelves, unread. Even my boyfriend would comment, saying, When are you going to read The Rig? It looks interesting.
Little did I know that, by the time I finally did get around to reading this, I’d spent so much more time thinking while reading this book than I did thinking about wanting to read it.
Which I thought about. A lot.
The Rig is unlike any book I’ve ever read. I can’t say I fully understand what happened, now that I’ve reached the end. I think a lot of it went over my head and honestly, I feel a couple readthroughs, especially after learning the twists–and, oh my, those twists–would help a lot in my overall understanding. But even still, I don’t count that as a negative against this book. Far from it. In fact, I enjoyed this book immensely. As I was reading it, I always thought about when I’d have some free time to read more it, because it’s a book that invests you early in, keeps you ensnared the entire time and never gives your mind a break; you always need to be thinking, processing, trying to figure it out, but also getting distracted by such a fantastic, futuristic society. 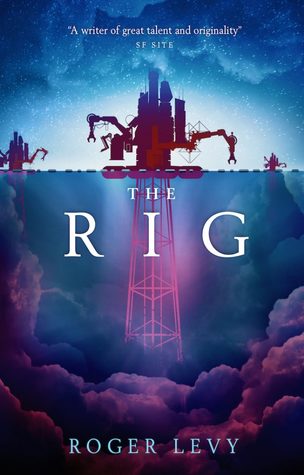 There were multiple perspectives from which this book was told and I enjoyed every one, though I believe Razer’s was not only my favorite, but the most immersive for me. It was so easy to slip inside her head and identity with her, being a storyteller myself. I was constantly curious about her assignments and as the book got deeper and deeper, I became more fascinated–and confused, but in a good way–by what–and how–she’d gotten herself into.
Tallen, Bale and Delta were all intriguing and gripping characters. But while Razer was a favorite because I could connect with her so well, the story of Alef and Pellonhorc was like watching a train wreck, knowing it was something I shouldn’t be watching yet unable to tear my eyes away, needing to know what happens next. Levy does a fantastic job of not only making you think, but making you feel, and the story of this pair of friends is no exception. Actually, every story each character was involved in was so gripping, I actually wasn’t bothered at all to rush and see how they all were going to come together by the end. I was so invested in each, I didn’t pay much attention to the fact that, obviously, they have to come together at some point, but I just wasn’t sure how.
But when they did, I was positively floored.
All-in-all, this was a fantastic book. The characters and their stories are too interesting to resist and the mystery/thriller aspect surprised me (and it did not help that I was finishing this book at one in the morning last night, unable to put it down, having to know what happens next, but also freaking myself out, thanks to the intense, thriller feel of some of the scenes). The world was intriguing and helped scratch an itch that the teasing trailers and revealed gameplay of Cyberpunk 2077 has caused in me. Granted, I don’t think the societies between the worlds here and the one presented in the early information of that game are totally similar, but the air felt the same and I didn’t realize how much I wanted that. The plot was complex and intricate, reminding me almost of the intricacies of Cloud Atlas, a novel I don’t think you can read once and fully understand. I think The Rig has the honor of being the same kind of book. It deserves the attention of multiple reads to fully understand the cleverness and events of at it all and it’s intriguing enough to make you want to go through that journey. And the religious elements and questions I actually found I really enjoyed!
Oh, and the multiple formats in which the text was presented–narrative, text conversations, excerpts from the Song–made it just that much more immersive and real.
If The Rig has been on your radar and you’ve wanted to check it out, I highly recommend you make the time to try it out. If it wasn’t on the radar before, then…well, you’re welcome.
Read on!