Last Updated on April 14, 2018 by ThoughtsStained

Title: The Search for the Red Dragon
Author: James A. Owen
Publisher: Simon & Schuster Books for Young Readers, Jan. 2008
Blurb: “‘The Crusade has begun’…
“There’s an old myth in the Archipelago,” he went on softly, shaking his head. “A legend, really…I recall it mentioned a Crusade, but those events happened seven centuries ago. We always thought it was only a story.”
It has been nine years since John, Jack, and Charles had their great adventure in the Archipelago of Dreams and became the Caretakers of the Imaginarium Geographica. Now they have been brought together again to solve a mystery: Someone is kidnapping the children of the Archipelago. And their only clue is a mysterious message delivered by a strange girl with artificial wings: “The Crusade has begun.” Worse, they discover that all of the legendary Dragonships have disappeared as well.
The only chance they have to save the world from a centuries-old plot is to seek out the last of the Dragonships — the Red Dragon — in a spectacular journey that takes them from Sir James Barrie’s Kensington Gardens to the Underneath of the Greek Titans of myth. With friends both familiar and new, they will travel through an extraordinary landscape where history, myth, and fable blend together to tell the oldest story in the world. And along the way, the Caretakers of the Geographica will discover that great deeds alone do not make heroes, and that growing up may be unavoidable…but growing old doesn’t have to be.

The Experience
(Minor spoilers in the middle of this post!)

So, the first book is what I remembered the most (mostly for that fantastic twist at the end), but while rereading The Search for the Red Dragon, the plot slowly came back to me as I read it. I don’t reread a ton of books, so that was sort of a neat experience, as I got to get excited and have my heart twist all over again, yet also catch little clues and tidbits that I had completely missed before, not knowing what was going to happen next. After rereading the first two books in the series, I’m at the same conclusion as at the end of the first one:
It is still one of the best I’ve ever read.
One of the reasons, after rereading the first two (but for some reason, very prominently with this second book) is the way lore and stories we are familiar with are integrated into the plot. But more so than that, when reading about the adventures of John, Charles and Jack, it almost feels like…like the version that Owen’s tells is actually real and the reality we believe to be true is actually the fiction. The way that he interweaves the narratives of all these well known stories and makes them fit into the plot of these books–like what he did with Peter Pan, especially, in The Search for the Red Dragon–it is just so dang impressive, that if someone claimed what Owen wrote about was true?
You know I’d believe it.
Hell, I almost wish it were.
There were a lot of aspects I loved within this book. Aven and Artus’s relationship (much different than what I expected, but I like it). The best character in the series, hands down:  Mr. Tummeler and the success of his many copies of his book (with his own recipes slipped in, because HOW FREAKIN’ ADORABLE). Laura Glue and all the Lost Boys (and Aven’s relationships with them, which showed another side of her that was really neat to see). The twist at the end with who they were fighting and the subtle hints that are thrown in about everyone’s intentions that get revealed towards the end, yet I could actually pick up on them, this time around. 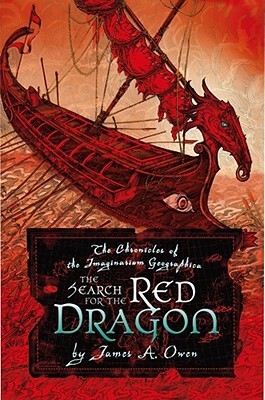 Seriously, friends. These books are gold and anyone who is a reader, I think, would love them.
I’ve only two qualms, so far. One of them is more of a quirk. Jack, as a character, drives me up the wall. That’s not a bad thing at all, because obviously you’re not always going to like every single character, but something about him just irks me. Even starting into Book Three (because yeah, I may have already started reading it…), I still find myself getting peeved by him.
I’m also slightly bummed that, in reflecting over the list of Caretakers at the end of Here, There Be Dragons, how there are almost no women on it. Granted, I realize that is history’s doing, not Owens, because of how male-dominated the profession was. And there are amazing characters, like Aven, who I really, really like. It’s just sort of a…sad realization, I guess. About how history worked. It makes me wonder, if Owen continued this series, in the future, and was choosing Caretakers from authors today, how many women would make the cut. I certainly can think of a long list who I’d nominate…
Anyway, a fantastic book that still felt like coming home, while I was reading it. Considering I’m already almost 100 pages into the third book, you’ll be seeing a review of The Indigo King before too long, before I take a pause from the Archipelago and read a couple library books. Meanwhile, I’m going to start bothering my friends again and ask them why they haven’t read these books yet.
Because they are just too good to miss.
Read on!