Title: The Shadow Dragons
Author: James A. Owen
Publisher: Simon & Schuster Books for Young Readers, Oct. 2009
Blurb: The Caretakers of the Imaginarium Geographica are at war.
The Imperial Cartological Society, led by Richard Burton, have collected all of the doors from the Keep of Time, and are building a new tower in our world at the request of an old enemy: The Winter King’s Shadow. He has a terrible weapon – The Spear of Destiny – that can be used to command the shadows of anyone it touches…including the protectors of the Archipelago, the dragons. With a ship called The Iron Dragon, the Shadow King regains passage to the Archipelago where he uses the power of the Spear and the portals of Time to enlist an unstoppable army of Dragon Shadows. And after the Archipelago falls, he intends to betray the Allies in our world – but not to align himself with the opposition. The Shadow King intends to use the turmoil of WWII to take over BOTH worlds.
All the legendary Caretakers, past and present, come together on a great island in the northermost part of the Archipelago to decide the ultimate fate of the Imaginarium Geographica, as a terrible battle ravages the lands around them. And their only hope lies with a small group of companions who are on the quest for the broken sword Caliburn: the Grail Child Rose Dyson; her mechanical companion, the owl Archie; a mouse with an attitude; a dead Professor of Ancient Literature; and the mythical knight, Don Quixote.
They must sail beyond the ends of the Archipelago in search of the sword, and the only being alive who can repair it: a scholar, who, once upon a time, was called Madoc.

The Experience
(Spoilers abound because I can’t contain myself)

So, this was a really, really fun book to read.
As war breaks out in the Archipelago and then World War II strikes out in the Summer Country–and our Caretakers are the only ones who can even attempt to fix it, considering they are a part of the prophecy meant to save them all–I am blown away by the intricacy of the plot and how everything that is real ties in so well to the fiction created here. To the point where, once again, I question whether or not our reality isn’t somehow shaped by this fiction I’ve been inhaling by the page. 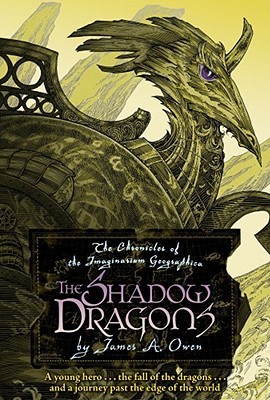 (I realize that, of course, it isn’t. Yet can you blame a girl for second guessing and perhaps, to some degree, maybe even wishing it was so? If you’ve read these books, then you know and understand exactly how this is possible. And if you haven’t…well, I’m slightly confused why you’re still reading this review, to be honest.)
My favorite aspect of this book, however, was the Tamerlane House.
That is a house I want to board in, only permanently.
Hell, I’d even be content to read a book just about the day-to-day conversations between the people who live there and the paintings that make it possible. It has to be so fascinating, even if they usually don’t come out, except for extreme emergencies. But by far and large, I thought that was the one of the best parts about this book as we progressed to the fourth book of the series. That, paired with the Trumps, the continuing complexity of time travel, the reassurance of old characters, the journey over The Edge of the World and that last chapter, where we see the beginning threads of a very uneasy alliance between the Caretakers and the Imperial Cartological Society…
Well, I’m really glad I can jump right into The Dragon’s Apprentice, the last book I’ve read in this series and can treat as a reread before I finally read the last two for the first time. It’s going to be a very surreal feeling…
Read on!