Blurb: Lady Olivia is not all she seems.

Trained for marriage to an assigned political target, her skills lie in programming household steambots to serve tea, dress her hair… and sound the alarm while she picks locks and listens at doors. Humiliated by a failed assignment, she decides to redeem herself by tailing a suspected double agent.

Lord Rathsburn must flirt with treason.

Struggles to cure a horrible disease have met with unexpected complications. The cells he engineered can make a man’s bones unbreakable, but the side effects are fatal. He believed the research terminated… until his sister was kidnapped by a German count. Her ransom? A cure.

Arriving together at a crumbling castle, an impossible task is set before them: cure the count’s guardsmen. Amidst their fake marriage, a very real growing attraction, dying guardsmen and escalating hostilities, Lady Olivia and Lord Rathsburn are thrust deep into the world of international medical espionage from which there may be no return.

So, after I absolutely and positively devoured The Golden Spider, I knew I had to read more of Renwick’s work. The second book in this series, The Silver Skull, featured the sister of the first book’s heroine, and I won’t lie: Lady Olivia annoyed me a lot in the first book, so I was a little apprehensive about reading a book with her in the front and center, but I loved the world that Renwick crafted so much, I couldn’t not read more in it.

I shouldn’t have worried. 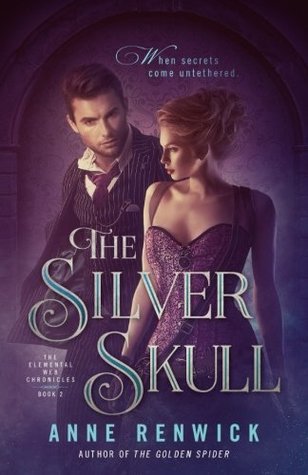 The Silver Skull was another fantastic look into this gorgeously detailed steampunk world. I had been fooled into believing Olivia a portrayal of a character who I wouldn’t enjoy, but learned that she’d fooled me alongside most of the others in her life (which, honestly, how bloody clever is that?). And I really enjoyed how Lord Rathsburn worked to discover those truths and figure out who she was, truly, just as she was trying to unravel the secrets that he held.

I also thought the main plot–saving his sister from a madman using a device that Rathsburn helped to create–was incredibly well done. I thought what was happening to the soldiers both fascinating and heartbreaking. The book had a lot of science thrown in and I still don’t understand the finer details of that science, but it’s written in such an approachable way that I don’t feel like an idiot or that it’s written to go over my head. I was just as fascinated with the science and how they were going to solve this seemingly impossible crew as I was waiting for them to finally kiss.

Once again, the romance itself left me breathless and I was tearing through these chapters, finishing this novel in only a few sittings. I love the way Renwick writes romance and it’s definitely gotten me into a romance kick, as of late (and I’m not complaining).

My one compliant, similar to the first book, however, is I felt the ending rushed once more; not incomplete, by any means. I just would have liked to lengthen out what happened after a little more, instead of cramming the resolution of both main plots so quickly.

But, that didn’t stop me from completely, totally and utterly enjoying this book and then immediately checking out The Iron Fin from the library. Renwick is now one of my favorite romance writers and you can bet I’m already anxiously anticipating her next release and hoping beyond hope she’ll continue to write steampunk romance.

Previous Post: « Top Ten Tuesday: Tropes I Will Die on This Hill For
Next Post: The Poppy War »