Title: The Thousand Deaths of Ardor Benn
Author: Tyler Whitesides
Publisher: Orbit Books, May 2018
Blurb: “I’m hiring you to steal the king’s crown.”
Ardor Benn is no ordinary thief. Rakish, ambitious, and master of wildly complex heists, he styles himself a Ruse Artist Extraordinaire.
When a priest hires him for the most daring ruse yet, Ardor knows he’ll need more than quick wit and sleight of hand. Assembling a dream team of forgers, disguisers, schemers, and thieves, he sets out to steal from the most powerful king the realm has ever known.
But it soon becomes clear there’s more at stake than fame and glory -Ard and his team might just be the last hope for human civilization.

Um, is it possible to give a book six stars?
Because holy shit, friends.
I have a feeling this review is going to be everywhere, so I do sincerely apologize for that. But I just…sorta…fell completely in love with this book? And after walking for two miles during my lunch break, my mind going over and over the events that transpired between these pages (especially the last, eh, 300 or so), I’m still not sure exactly how to articulate how fantastic this book is. I mean, sure, I could just say, “Hey, holy shit, this book is pretty dang fantastic and you definitely want to read it if you like fantasy and heists and characters who feel like people instead of characters and such a complex, vibrant world with a new magic system and why haven’t you read it already, I need someone to talk to about this book, but especially page 627?!”
I mean, sure, I could write that and leave it at that.
But that doesn’t seem to truly do the book justice, you know?
So, I received an ARC from Orbit, which, first of all (!!!). The fact that I’m “working with” Orbit now to write reviews over some of their books is something that will never, ever, ever cease to blow my mind (I know this is a common thing for book bloggers, but this is new to me, so stay with me). Because Orbit is one of my favorite publishers of all time. They publish good shit, friends. You already know this. So when this title was included in the options, I selected it. I’d never heard about it before, but you had me at heists and dragons. How could it not be good?
I was so not prepared for this story.
(That’s a good thing.) 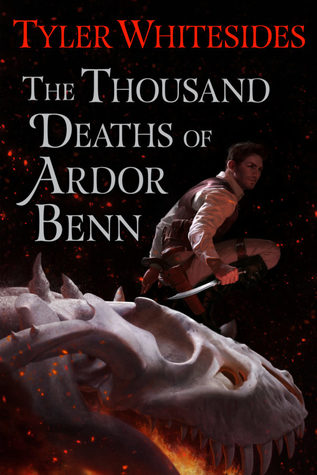 In a lot of ways, it reminded me of Scott Lynch’s The Lies of Lock Lamora. If you’ve read my review of that novel, you know how hard I fell for that book and how much it shook me to my core. Lynch has a level of mastery that few other authors I’ve ever read can match. And I read a lot of books. I thought Whitesides was akin to Lynch’s level of skill with this story in many ways. The way how both authors have come up with this complex narrative of heists that, if I’m able to pull myself out of the story (which is really freakin’ hard to do), I am just blown away the the intricacy and the layers of complexity. Both authors have created worlds so in-depth, it wouldn’t take much convincing at all for me to believe that these worlds are actually, in fact, real, and they are nothing more but humble scribes retelling events that actually happened. It’s that immersive.
Both authors have an uncanny knack for creating a feeling of comfort that you completely believe everything is going to be okay, only to destroy it all in the matter of one sentence. For Lynch, it was on page 466. For Whitesides, my sense of security and trust shattered on page 627.
Masterful. Positively masterful.
With The Thousand Deaths of Ardor Benn, there was so much I was impressed by and loved, that I don’t truly think I can sum it up in the span of one review and capture everything. So I’ll try to give you a quick run down of some of my highlights, with the knowledge that, once I publish this post, ten more things I should have written but forgot will pop up and I’ll be super peeved by it:

I probably should stop, because this is getting to be one of the longest book reviews I’ve written. But in all honesty, this book deserves that. I’m not sure what else I could say to express my enthusiasm, respect, love and awe that I have for this story, aside from maybe one additional thing:
Any word on the publication date for book two?
Read on!
** I know I keep bringing up that line, but seriously. Have you ever been super content, having those feel-good-feels because things went how you imagined they would and then suddenly, one line just stops you in your tracks, makes you tense up and freeze, and suddenly you have to read it over again to make sure you’ve read it correctly, because there is no way that just happened? Tolkien did it to me in The Hobbit; Lynch in Lamora; Brent Weeks in The Broken Eye. And now Whitesides has done it to me here.