Title: The War in the Dark

Blurb: A genre-defying page turner that fuses thriller and speculative fiction with dark fantasy in a hidden world in the heart of Cold War Europe.

Europe. 1963. And the true Cold War is fought on the borders of this world, at the edges of the light.
When the assassination of a traitor trading with the enemy goes terribly wrong, British Intelligence agent Christopher Winter must flee London. In a tense alliance with a lethal, mysterious woman named Karina Lazarova, he’s caught in a quest for hidden knowledge from centuries before, an occult secret written in a language of fire. A secret that will give supremacy to the nation that possesses it.
Racing against the Russians, the chase takes them from the demon-haunted Hungarian border to treasure-laden tunnels beneath Berlin, from an impossible house in Vienna to a bomb-blasted ruin in Bavaria where something unholy waits, born of the power of white fire and black glass . . .
It’s a world of treachery, blood and magic. A world at war in the dark.

**ARC received from Titan books in exchange for honest review**

This was a very interesting read in that I still can’t figure out exactly how I feel about it.
Titan asked if I wanted to be part of the blog tour for this book. Considering how much fun I had doing the last one, I was totally game for it. This book seemed a little out of my usual reads, yet it also piqued my interest. It blends the magic found in fantasy with the mystery that is the core component of thrillers–and thanks to my love for authors like Stephen King or Dennis Lehane, that’s a genre I’m not unfamiliar with, even though fantasy and science fiction are my life source. Everything about this book seemed intriguing, especially after reading the blurb. The time period, the fusing of genres, the begging answer: what is warring in the dark?
So I signed up for the tour and I read it. And I enjoyed it.
I think.
It’s honestly driving me nuts, how I can’t really place an opinion, one way or another. It was well written, with some seriously good one liners. The pace was quick and there was plenty of action, intrigue and mystery to go around. There were events and details that were so terrifying, there literally wasn’t a night when I read this book during the same day where I didn’t have nightmares about some of the more grotesque events I’d read about earlier (particularly the night when he goes undercover and visit the house to place his bid; oof, that was a rough night of dreams). And the ending? I didn’t see that coming at all. Twist completely threw me, but in a good way, I think. 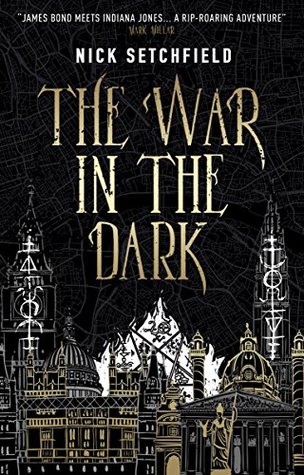 So if you’re a fan of thrillers or of horror, damn, definitely check this one out. You’ll prolly enjoy it immensely.
And yet, I didn’t fall in love with this. Not completely.
There were times when I felt confused. When the jumps between chapters were just a little too sporadic for me. I also didn’t really feel like I connected with the characters very well. With Christopher Winter, I guess, in retrospect, I can see why (though I won’t say any more, because, spoilers), but I would have liked to feel like I understood or connected with one of them, truly got invested in them. But I didn’t. And though this is a thriller, so I know the pace is meant to be breakneck, I would have liked it to be a little slower; marinate on the details a little longer.
So, I liked it, but I wasn’t completely ensnared. Prolly because the dominate genre–thriller–isn’t my every day cup of tea, but rather a rare treat I indulge in on holidays. And lately, I’ve been in the mood for my regular order: epic fantasy, dripping in world building, fantastic quests and complicated relationships, with enough snark and sarcasm to drown me in it. The War in the Dark is a good book, a quality read, that I just missed out fully enjoying because of the timing that I read it. I’d definitely recommend trying it out for yourself, though, and seeing what you think!
Read on!