Title: Time Shards
Author: Dana Fredsti and David Fitzgerald
Publisher: Titan Books, Jan. 2018
Blurb: It’s called “the Event.” An unimaginable cataclysm in the 23rd century shatters 600 years of the Earth’s timeline into jumbled fragments. Our world is gone: instantly replaced by a new one made of shattered remnants of the past, present and future, all existing alongside one another in a nightmare patchwork of different time “shards”—some hundreds of miles long and others no more than a few feet across.
San Diego native Amber Richardson is stranded on a tiny fragment of 21st century Britain surrounded by a Pleistocene wilderness. She crosses paths with Cam, a young warrior of a tribe from Roman Brittania, and together they struggle to survive—only to be imprisoned by Cromwellian soldiers. One of their captives is a man who Amber calls Merlin, who may know more about what caused the Event. Together, they learn they must escape before the damage to the timeline is irreparable.

So, before I gush about the book itself–and there is a lot of gushing to be had over Times Shards–I gotta talk about the neat way I got a copy. I stumbled upon a tweet from Titan Books, searching for US bloggers to receive copies of new releases from this year and write honest reviews over those books. I sent them an email and was surprised to be added to their list of bloggers, despite how small Erlebnisse still is. I received two books, based on my interests.
One of them was Time Shards by Dana Fredsti and David Fitzgerald.
So, here’s my honest review, in one sentence:
I didn’t even get halfway through this book before I started telling my friends they need to read it.
Now, here’s the gushing.
First of all, that premise. It’s one that makes your head hurt (in a good, challenging way) and makes you desperate to find out more, because you just want to know what’s happening, how it happened and what they are going to do to fix it. Then, you pair it with the way the book was written, through multiple POVs throughout multiple points in time, jumping back and forth between life before the Event and just after the Event occurred, creating the time shards everyone is stuck in.
I loved how we got a section featuring famous figures in history and what they were doing during the Event and how the Event completely shattered (heh) their world. I loved following the characters around as they struggled to piece together (and come to terms with) what happened and struggled to survive terrors from the past and the future, depending on where they themselves were from in the timeline. 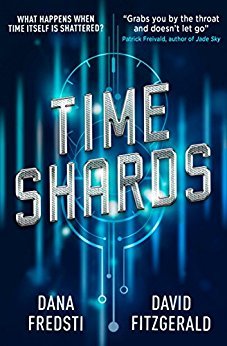 Throughout the entire book, I couldn’t stop thinking about how clever it was (in every sense a compliment). Most notably, I loved that Amber was at a Con and cosplaying before the Event and how her outfit had real world consequences after the fact. I also really enjoyed the attention to detail, especially the more gritty or uncomfortable ones. There were multiple times when I squirmed in my seat and a very distinct moment–when we learn the truth behind a character’s background–where I said, “No fucking shit,” as I was reading, literally bouncing up out of my seat in a mixture of horror and shock, before I continued.
Honestly, my only complaint?
The book ended.
Trust me, the way it was set up was absolutely necessary. Like I said, I loved getting all the flashes from different times and perspectives as the Event happened (particularly Neil Armstrong). I loved getting to know our main group of survivors and seeing things from their POV (also, Cam? Favorite character, absolutely hands down). Yet I felt like we were just getting into the true meat of the story, really figuring out what the Event actually was and what they were going to do to fix it, and then the story ended.
Killer last line, though.
And now, I’m left with a predicament I’m not entirely used to, considering Time Shards was published, eh, a week ago, yet I’ve already started searching for information when the sequel is coming out (hint: there is no information, because the book came out a week ago). Because I really don’t want to leave this world and the wonderful way it was written, the characters I became very much invested in and experiencing all the clever ways in which the Event shattered time and how everyone is responding to it. And to think, if I hadn’t stumbled upon Titan’s tweet and reached out to them, I might not have discovered the book that I read in 100+ page increments for the past few dinner breaks.
Best email I’ve ever sent.
Cheers.