Title: We Ride The Storm

Blurb: War built the Kisian Empire and war will tear it down. And as an empire falls, three warriors rise.

Caught in a foreign war, Captain Rah e’Torin and his exiled warriors will have to fight or die. Their honour code is all they have left until orders from within stress them to breaking point, and the very bonds that hold them together will be ripped apart.

Cassandra wants the voice in her head to go away. Willing to do anything for peace, the ageing whore takes an assassination contract that promises answers, only the true price may be everyone and everything she knows.

A prisoner in her own castle, Princess Miko doesn’t dream of freedom but of the power to fight for her empire. As the daughter of a traitor the path to redemption could as easily tear it, and her family, asunder.

As an empire dies they will have to ride the storm or drown in its blood.

Strap in, loves, we have books to discuss!
So, ironically enough, We Ride the Storm by Devin Madson is one of the few books I’d actually heard about before getting involved with the SPFBO contest, so I was really excited when it was announced as a finalist, because now I had to read it on a deadline, instead of just knowing I wanted to read it and just…not getting around to it yet, as I’ve been doing for a while (because bookworm problems, amiright).
I’m pleased to report that I enjoyed this novel and am quite excited to read the sequel (on top of all of Madson’s other works…I did admit I was behind, after all). I’m also really hoping to snag myself a paperback copy of the sequel, because that’s my preferred medium and I think I would have enjoyed curling up in bed at home reading We Ride the Storm much more than sneaking chapters in at work during my dinner breaks–which, let me warn you, eating dinner while reading this book is not for the faint-hearted or those with a queasy stomach.
Luckily, I am neither, but Madson’s depictions of brutality and respect for the dead, ironically enough, definitely challenged that claim.
There’s a lot I could say about this novel, but of course, now that the time has come to write them, I’m struggling to come up with what to say. I did really enjoy this, but I won’t lie: it took me a hot minute to get into it. I think it was a combination of many things–not least of which was that my mood wasn’t the greatest last week, when I started the novel, so I wasn’t doing it any favors–but I also wanted the character arcs to intersect just a tiny bit earlier, so I could start making sense of things. 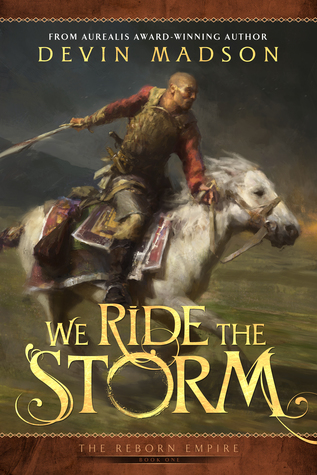 But wow, the second half of the novel, I was flying through it, looking even more forward to my dinner breaks than I usually do, if only because I wanted to find out what happens next (and also, because, well, I’m hungry, so that’s always a thing).
The world is very grand and I hope to see more worldbuilding in the sequel, really grounding me into how this world works, because it obviously has a lot of depth that I feel like we’re just scratching the surface so far. I loved the intricate, weaving plot and Madson’s fearlessness when writing. It was dark and gritty and realistic and raw, which are some of the novel’s key strengths. Nothing is held back.
But my main draw was the characters. Even though it took me a little longer than most, I bet, to get into the novel, I definitely became ensnared by the characters right away. I wanted to punch Rah on more than one occasion, but I also cannot help but admire him and commend him for his commitment to his values and his beliefs. I have a serious soft spot for Miko and my heart wanted to break for her, but she didn’t give me the time. She’s a woman who had shit to do, people to kill, lies to weave, a country to take back and protect. She has no time for my pity and I admired her strength. I was so fascinated by Cassandra, but I was also really frustrated that I never learned who She was, how She got there, why Cassandra never questioned her presence or why She lived inside her head (but also could get out of it?). Perhaps I might have missed that explanation, but that was the thread I was looking most forward to learning the answers, so I was a bit disappointed to have either missed those answers entirely or not get them yet.
These characters definitely wove their way into my brain and it is what happens to them next that has me itching for the sequel (especially after seeing that cover and reading that blurb!? Yes, sign me up, please, particularly for Dishiva’s chapters from her perspective!!). I think We Ride the Storm is a very solid book and I’m very lucky to have had the chance to finally read Madson.
I have no intentions of stopping, either.
Read on!