Last Updated on February 27, 2019 by ThoughtsStained 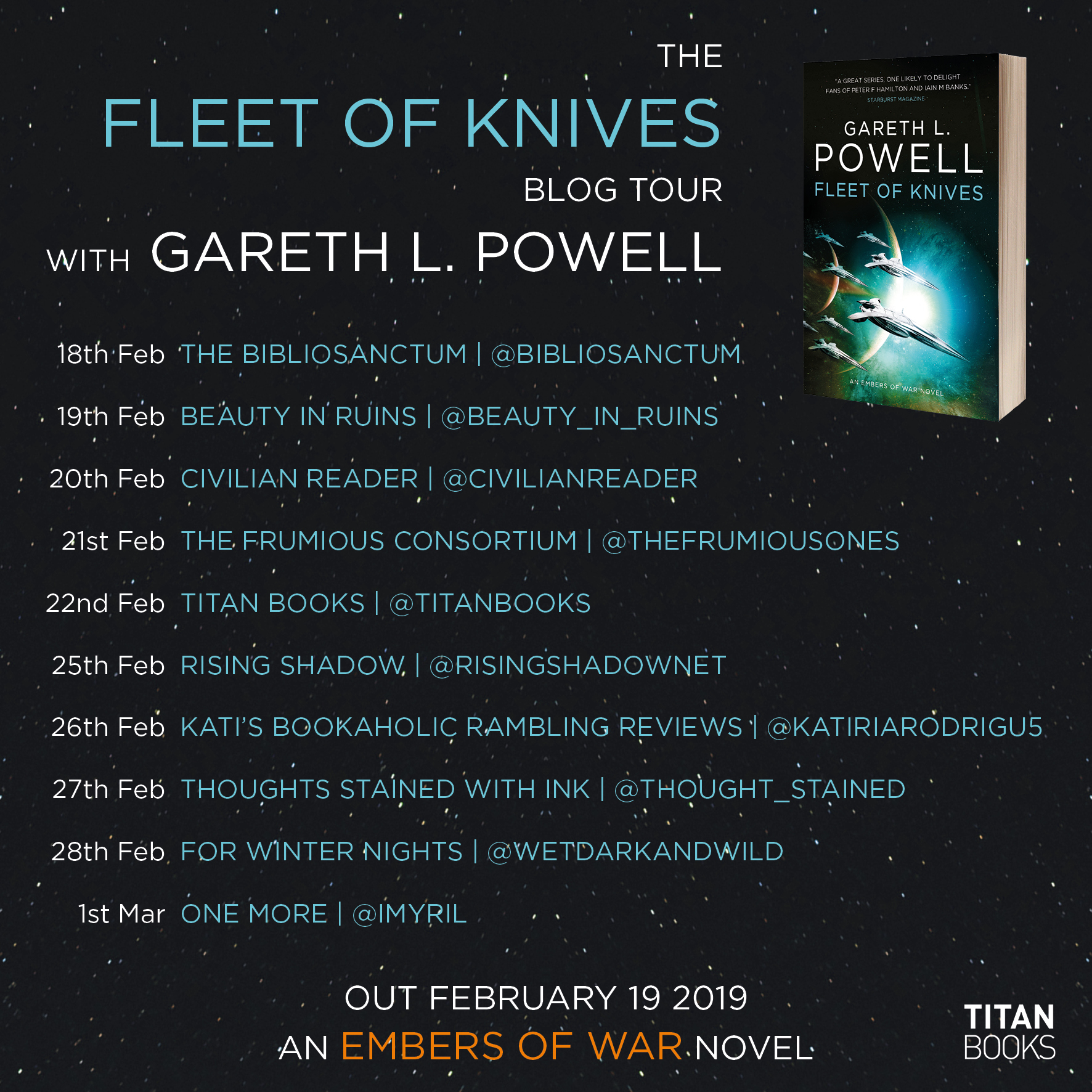 It’s my ultimate pleasure to welcome author Gareth L. Powell to my little corner of the internet today to share some of his wisdom and insight on writing–specifically, what it’s like to write a second book in a trilogy, which Powell just did with his most recent release, Fleet of Knives, sequel to the stellar Embers of War, both from Titan Books. If you don’t know Powell from his awesome books, you probably know him from his super positive presence on the internet, constantly helping out others with advice and encouragement.
So, let’s see what wisdom he has to share for you all today, eh?

The second book is often the hardest. If the first book was well-received, the second has to live up to it, while also turning everything else up a notch and laying the groundwork for the third instalment.
The trouble is, because the second book is a bridge between the conflicts of the first and third books, it can be in danger of being boring. The reader knows nothing is at stake, because the final conflict will take place in the third book. The second is all about bringing all the pieces into place for that final conflict.
Or is it?
My formula for a trilogy is that the first book sets up the characters and their world; the second book turns everything upside down; and the third creates a new world comprised of elements of the first and second. Think of the original Star Wars trilogy: the first introduces Luke, Vader and so on. The second takes everything we thought we knew and changes it: Obi Wan was a liar, Vader is Luke’s father, the Rebellion loses. And then the third episode shows Luke coming to terms with this new reality and forging a new identity based on this new information—to the point where the young farm boy becomes enough like his father to go up against the Emperor but retains enough of his former self not to fall to the dark side.
It all sounds like a tall order, doesn’t it? But the second book is the author’s opportunity to really make his characters suffer. Everything they thought they knew can be called into question, and the true horror of what they’re facing can be revealed. By the end of the second book, the reader should be wondering how the hell these people are going to triumph in the end, as everything seems so hopeless and desperate.

This approach gives the trilogy the appearance of a sine wave. The plot starts in the middle, rises slightly at the end of the first book, and then plunges down in the second, only to rise again in the third.
Second books are also great places to expand upon beloved characters. To reveal greater depth and make us care more about them, so we’ll really be rooting for them in the final conflict. 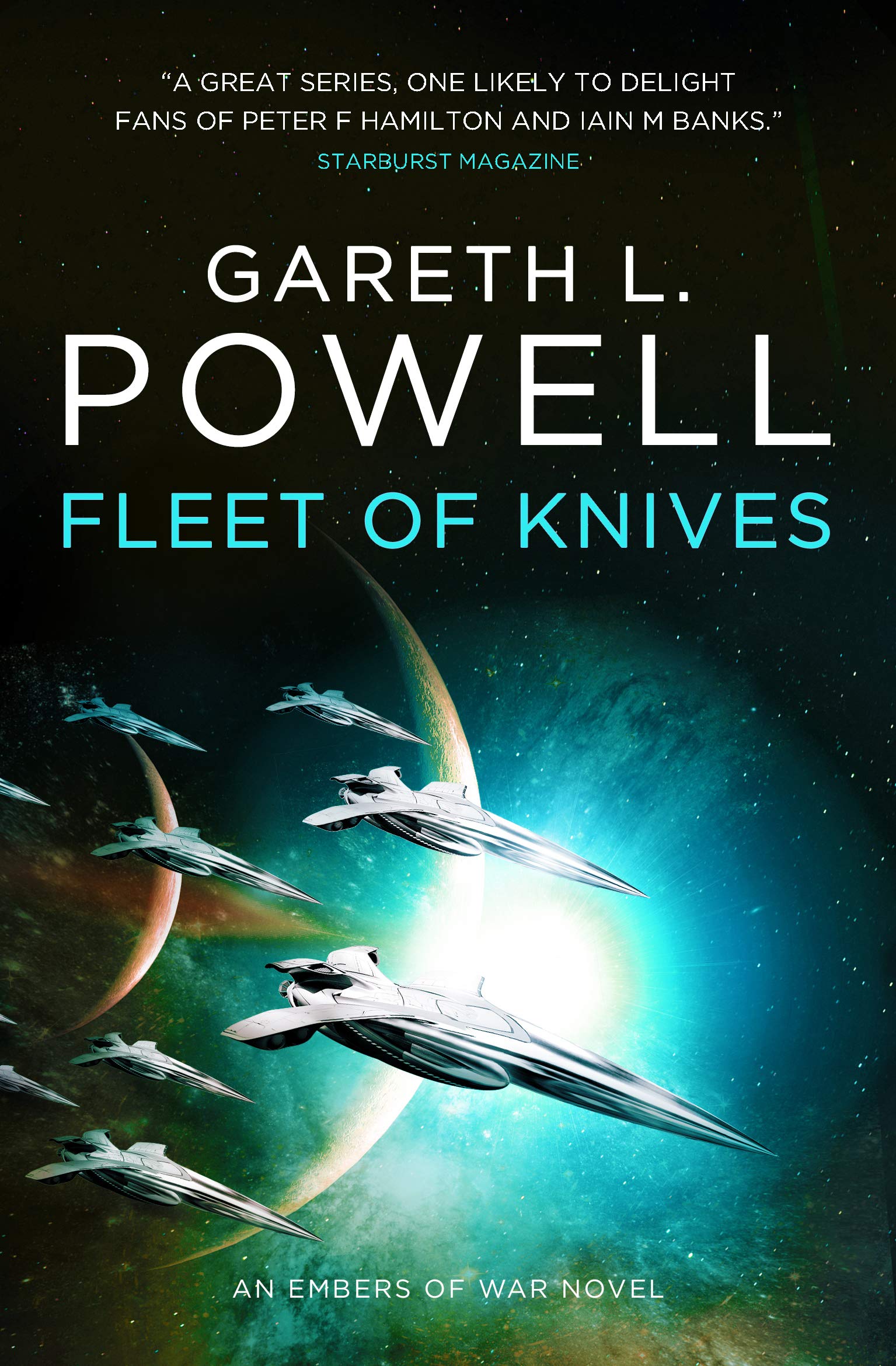 In Fleet of Knives, the second volume of the Embers of War trilogy, I present my characters with the unforeseen consequences of their actions in the first book. Something that seemed like a good thing turns out to be very, very bad. Plus, I introduce a new threat that has only previously been hinted at and turn one of the characters against the rest.
(I’m trying very hard not to give too much away here).
So, if you’re one of the people who fell for the good ship Trouble Dog and her misfit crew in Embers of War, you’re going to find out a lot more about them in Fleet of Knives—but you’re also going to see them struggling against bigger and nastier challenges as we meet some new characters, visit some new and weird locations, and finally start to comprehend the nature of the twin threats facing the Generality of Humankind.

GARETH L. POWELL is a speculative fiction author from the UK. He has won the BSFA Award for Best Novel and been shortlisted for the Seiun Awards in Japan. His novels and novellas have been published in the UK and US by Solaris, Titan Books, and Tor.com Publishing.
His short fiction has appeared in Interzone, Clarkesworld, and Gardner Dozois’s Year’s Best Science Fiction, and his story ‘Ride The Blue Horse’ was a finalist for the 2015 BSFA Award.
Gareth was born and raised in Bristol, UK, and was once fortunate enough to have Diana Wynne Jones critique one of his early short stories over coffee. Later, he went on to study creative writing under Helen Dunmore at the University of Glamorgan.
Gareth has run creative writing workshops and given guest lectures at UK universities, been a guest speaker at the Arvon Foundation in Shropshire, and given talks about creative writing at various literature festivals around the country.
His nonfiction book About Writing is an essential field guide for aspiring authors.
Gareth has also written for The Guardian, The Irish Times, 2000 AD, and SFX. He has written scripts for corporate training videos, and is currently at work on a screenplay.
He still lives near Bristol and is represented in all professional matters by Alexander Cochran of the C&W literary agency.
Fleet of Knives is out now from Titan Books. You can find Gareth on Twitter and his website.
Cheers!